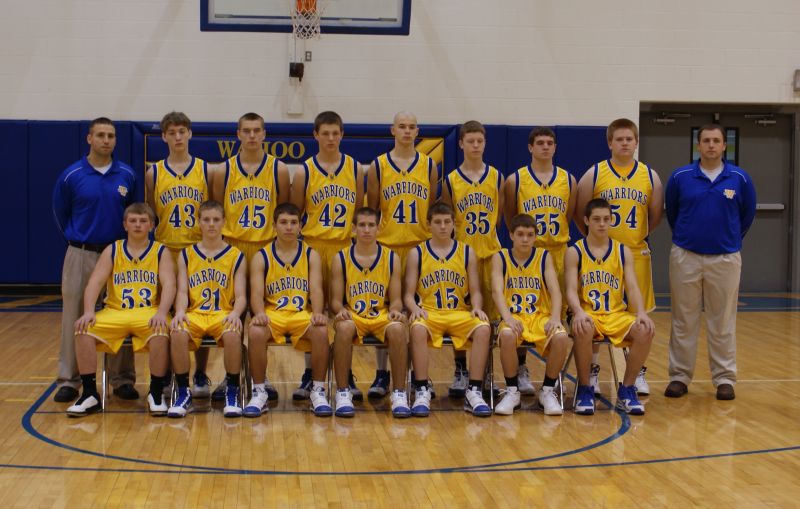 They started the season off with a win at home against Bennington. Casey Brown had 16 points and Christian Hohl and Brook Stuart both had 15. It was an intense game won by the Warriors, 62-55.

The Warriors then traveled to Seward for their next game. Seward shut down the Warriors in the first half, allowing only 6 points, a season low. Wahoo never really caught fire and ended up losing, 47-36. Mitch Shukis led with 13 points. Brown also put in 11.

The Warriors’ next game was at home against Logan View. The Raiders didn’t come prepared. Wahoo never dropped down to their level of play and put it to them. Wahoo won big, 62-40. Brown was the high point man with 18 points. Hohl and Jon Abbott both added 17 of their own.

Wahoo’s next opponent was Centennial at home. The Warriors came out strong in the first quarter, ending it with a 20-point lead. Wahoo led 41-17 at half and never looked back. Hohl led the team in points with 21. Shukis had 15.

Wahoo then traveled to Fort Calhoun for their next game. It was a terrible night shooting-wise, as the Warriors shot just 35.5 percent from the field. Nonetheless, Wahoo got the victory by forcing 23 turnovers. Shukis scored 21 points, which was the game high. Brown recorded Wahoo’s first double-double, scoring 18 and grabbing 10 rebounds. The final score was 58-39.

The Warriors’ next game was at Syracuse. A small court messed with the Warriors’ game, forcing 30 Wahoo turnovers. They never got used to the gym and lost, 52-41. Brown led the team with 12 points.

Wahoo traveled to Crete for their next game. The Warriors had another bad shooting night, shooting only 25 percent from the floor, but they forced bad shots and grabbed every rebound. The game came down to some clutch free throws by Brown, which helped put the game away. He also had his second double-double with 12 points and 12 rebounds. Shukis also had 12 points. Wahoo won 40-37.

The Warriors’ next game was at DC West. It was a close game after three quarters. Wahoo led by just 2, but they pulled it off and won by 10, 54-44. Brown had his best night of the year, recording 18 points, 10 rebounds, and 5 blocks. Stuart also had a good game scoring 11 points.

Wahoo’s next game was against Norfolk Catholic. Wahoo took an early lead after the first, but it all slipped away. Norfolk Catholic won 57-40. Stuart had another good game, knocking down 10 free throws. He led the team with 12 points.

Wahoo finally had a home game after 5 road games in a row. Raymond Central came to Wahoo and proved themselves worthy. Wahoo was down by 10 after the first, but slowly chipped away and the game was tied after 3 quarters. Wahoo led by 1 with a few seconds left and played tough defense and forced a 3 at the buzzer. It missed off the front iron and Wahoo got the win 57-56. Shukis was the high point man with 15. Brown and Hohl also played a big part scoring 13 and 10.

The Warriors rode the bus to Arlington for their next game. Wahoo led at half, but Arlington stuck with them. It was a 4-point ball game after 3 quarters. Both teams played even in the 4th, which resulted in a Warrior win, 67-63. Wahoo knocked down 15 free throws, 7 of them coming from Abbot, who led the team with 19 points. Brown had 17 points.

Mount Michael came to Wahoo for the next game. Wahoo trailed by 8 at half. They picked it up and pressed the 3rd quarter and took the lead by 2. They ended up winning by 9, overcoming a double-digit deficit. Brown had a season high for Wahoo, scoring 26 points. Most of his points came off Hohl’s 9 assists. Ten players scored for Wahoo, and only 1 player scored in double-digits. The final score was 64-55.

Wahoo’s next game was another home game, this time against Ashland. The Warriors jumped on the Blue Jays early and led by 17 after the 1st half. Ashland made a little run, but it wasn’t enough. Wahoo won 50-41. Stuart scored the most points with 14, Hohl scored 13 and Brown had 10.

The Warriors then played North Bend in Wahoo. Wahoo stayed above them the entire game. The score was 32-6 at half time. The Warriors got their largest margin of victory, 41. The final score was 67-26. Hohl was the high point man with 19 points. Brown also chipped in 16.

Wahoo’s final game was at home against Schuyler. Wahoo led big all game and won, 63-44. Hohl had 16 points. Brown also had 16 points and recorded his 4th double-double with 10 boards. It was a great way to end the year.

Overall it was a great year considering over half the team were freshmen. Each player had his own favorite highlight of the year:

“Coming into this season I wasn’t sure what to expect. I knew we would be very young and inexperienced, but the boys practiced hard every single day and pushed each other to a very high level,” commented JV Coach Mike Bomar. “We made a lot of mistakes that I expected a young team to make, but with the great leadership of our older kids along with the great effort and coachability of our younger kids we were able to put together a very fun and successful J.V. season.”