A trip to Kearney was in store when both Wahoo teams headed west to compete against the best Class C runners in the state on October 23.

The girls, despite their inexperience at the state level, performed well. Abi Klein led the way with a time of 21:57, which garnered her a 34 place position. Next in for the Warriors was Kylee Edmonds who placed 39 in a time of 22:12. Sydney Nicholls (56th, 23:08) and Blakely Thrasher (58th, 23:14) completed the scorers for the Lady Warriors. Erin Sutton (71st) and Kylee Jones (84th) rounded out the varsity squad. For their efforts, the girls finished 10 in the team standings.

The boys' team also performed well, in spite of the fact that only one member, Ryan Volin, had ever competed at the state level. Volin's experience showed, as he led the gentlemen with a 19th place finish in a time of 18:00. Caleb Groff was next to cross the finish line for the Warriors in 18:49, placing 49th overall. Following close behind was freshman Zac Lamprecht, running 53rd in 18:58. Sam Brabec (88th, 20:24) and Kahleb Elliott (90th, 21:05) completed the varsity squad. The boys' team placed 9th, overall.

"It was a great year for both teams," stated Head Coach Karla Curran. "To get both squads to Kearney was a goal we set at the beginning of the season. This hasn't happened in 7 years! The future looks bright for Wahoo Cross Country!"

Although the weather proved to be cool and blustery, the Wahoo harriers were on fire, as they took to the course at Boys Town for the C-1 District Cross Country Meet on October 15, 2015.

Freshman Abi Klein ran a fabulous race in 21:53, grabbing the 3rd place position. Next, in a powerful pack, came Kylee Edmonds (12th, 22:36), Sydney Nicholls (13th, 22:45), and Blakely Thrasher (14th, 22:50). All four girls received All-District honors, and a spot as an individual state qualifier. Erin Sutton placed 16th in 23:13, just one place out of an individual berth. Kylee Jones completed the varsity squad in (35th, 25:17). For their efforts, the girls' team finished as District Runner-Up, compiling 42 points to Omaha Concordia's 33.

The boys' team, with the help of some strong finishes, managed a third place spot, and the first trip to the state meet as a team in seven years! Ryan Volin led the charge, placing 7th in 18:14, earning All-District honors. Next up for the Warriors was Caleb Groff, who came in with a blazing kick, running 18:30 for 13th place, and like Volin, earning an individual state qualifying berth, as well as All-District honors. Freshman Zac Lamprecht was next in, running 17th (18:42), and not far behind was Aaron Redding (19th, 18:51). Completing the varsity squad was Kahleb Elliott and Sam Brabec, running 35th and 40th, respectively.

"I am thrilled with the outcome, today!" exclaimed Head Coach Karla Curran. "We have waited seven long years for the day when both teams qualify for the state meet, and it has finally arrived! I could not be more proud of these teams!"

The State Meet will be held at the Kearney Country Club on Friday, October 23. The girls will run at 12:00 noon, and the boys will take to the course at 1:00 p.m. Good luck Warriors!

It was 10 years in the making, but the Wahoo girls' cross country team finally brought home the team title while competing in the Capitol Conference meet held at Fort Atkinson State Park last Thursday, October 8, 2015.

Freshmen Abi Klein and Kylee Edmonds ran neck and neck throughout the entire race, but it was Klein who persevered once again. Klein completed the course in 21:46 for a third place finish. Right on her heels was Edmonds, who ran 21:51, for fourth place. Next up for the Lady Warriors was Sydney Nicholls, who placed seventh with a season-best time of 22:26. For their efforts, all three girls received All-Conference honors. Blakely Thrasher (11th), Erin Sutton (16th), and Kylee Jones (24th) completed the varsity squad.

"I was thrilled with most of the efforts, today, especially on the girls' side," commented Coach Karla Curran. "To bring home the conference title for the first time in 10 years is quite a feat! The boys also continue to improve with every passing meet, so it is my hope that all 6 can run their best times of the season next Thursday at districts."

The Wahoo harriers head to Boys Town for the C-1 district meet this Thursday, October 15. The first race begins at 4:00 p.m.

An absolutely beautiful day was exactly what the Wahoo harriers needed last Thursday, October 1, when they traveled to Pioneers Park to take part in the Lincoln Lutheran Cross Country Invitational.

The ladies began the day off splendidly, when five Warriors placed in the top 15! Abi Klein, despite being sick with the flu earlier in the week, still ran well, placing sixth in 22:26. Teammate Kylee Edmonds was next to cross the finish line, running 22:42 for a tenth place finish. Sydney Nicholls (12th, 23:03), Blakely Thrasher (14th, 23:17), and Erin Sutton (15th, 23:28), closely followed Edmonds. Kylee Jones completed the varsity squad running 25:03 for twenty-third place.

The gentlemen continued the positive efforts, when three Warriors medaled. Ryan Volin once again led the way with his second place finish in 18:04. Caleb Groff was not far behind, running 18:24 for sixth place. Next came Zac Lamprecht, who ran another personal best of 18:46. Lamprecht placed ninth for his efforts. Sam Brabec (21st), Shawn Knowlton (23rd), and Colin Grandgenett (24th), rounded out the varsity team for the running Warriors. For their efforts, the boys won their first team title in many years!

"It was fantastic to finish the day so positively!" commented Coach Karla Curran. "To be this successful in spite of the sickness spreading on the team, says wonders about just how badly they wanted to perform well. I could not be more proud of their efforts!"

The Wahoo harriers enter the championship portion of their season this week, when they run in the Capitol Conference meet held at Fort Atkinson State Park, on Thursday, October 8. The first race is set to begin at 4:30.

Wet conditions welcomed the Wahoo harriers as they took to the North Bend golf course to compete in the North Bend Central Cross Country Invitational on Thursday, September 24.

The girls' team began the day on a positive note when five Lady Warriors medaled, launching the team to a third place finish. Abi Klein, once again, was the first to finish for the Warriors, setting a new personal best of 2l:57 for the 5000 meter course, earning her a ninth place medal. Following close behind was Kylee Edmonds, who also ran a personal best of 22:06, placing her tenth among the competitors. Next up was the trio of Sydney Nicholls, Erin Sutton, and Blakely Thrasher, who took the twelfth through fourteenth spots, respectively. Kylee Jones completed the varsity scorers with her nineteenth place finish in 24:54.

The gentlemen had a fine day on the course as well, and were led by junior Ryan Volin, who finished in 18:12, which was good enough for ninth place. Right on Volin's heels was Caleb Groff, who came charging in with a new personal record of 18:16, and a tenth place finish. Sophomore Aaron Redding was next to cross the finish line for the Warriors, running 18:36 for sixteenth place. Zac Lamprecht (19), Kahleb Elliott (20), and Shawn Knowlton (26) rounded out the varsity squad. For their efforts on the day, the boys finished in third place.

"I was extremely pleased with the individual efforts, today," commented Head Coach Karla Curran. "We had so many athletes set personal bests on a sloppy course. I can't wait to see how we will fare in favorable conditions!"

The Wahoo harriers' next challenge is the Lincoln Lutheran Invitational on Thursday, October 1. The first race begins at 4:00 p.m., when the middle school athletes take center stage.

Cooler temperatures and excellent competition were key components to some outstanding performances last Thursday, September 14, when the Wahoo harriers traveled north to compete in the Columbus Scotus Cross Country Invite.

The girls' team was once again led by freshman standout Abi Klein, as she turned in her best time of the season, running 22:45 for 18th place. Next in for the lady Warriors was Kylee Edmonds who ran 23:10, earning her a top 25 finish in 23rd place. Following Edmonds were teammates Erin Sutton, Blakely Thrasher, and Sydney Nicholls, who finished in 30th, 31st, and 33rd place, respectively. Rounding out the varsity squad was Kylee Jones, who placed 54th in a time of 25:40. The girls' efforts garnered them a 5th place team finish.

The boys' team was led by junior transfer Ryan Volin, who ran 18:22 for the extremely hilly course. This time was good enough for a 10th place medal. Following close behind was Caleb Groff running 18:45 for 18th place. Groff also finished in medal contention. Next for the Warriors came Aaron Redding (24), Kahleb Elliott (28), Zac Lamprecht (31), and Shawn Knowlton (37). The boy's team finished in 3rd place.

"I was quite pleased with the way we performed today," commented Head Coach Karla Curran. "Scotus is one of our toughest meets of the season. To finish as we did in the team standings is a testament to how much these kids really wanted to succeed!"

Click HERE to read Wahoo Newspaper coverage of the invite.

More favorable race conditions were the topic of conversation as the Wahoo harriers took to their own course as the host of the W-Club Invitational on Thursday, Sept. 10.

WHS freshman Abi Klein
The girls began the day off in fine fashion when 5 girls placed in the top 25. Abi Klein led the way once again, with an impressive 8th place performance, running 22:48 for 5000 meters. Not far behind was Kylee Edmonds, who also medaled by placing 12th with a time of 23:20. Erin Sutton, Sydney Nicholls, and Blakely Thrasher finished the race in twenty-third through twenty-fifth place, respectively. For their efforts the girls finished in 4th place out of 12 teams. 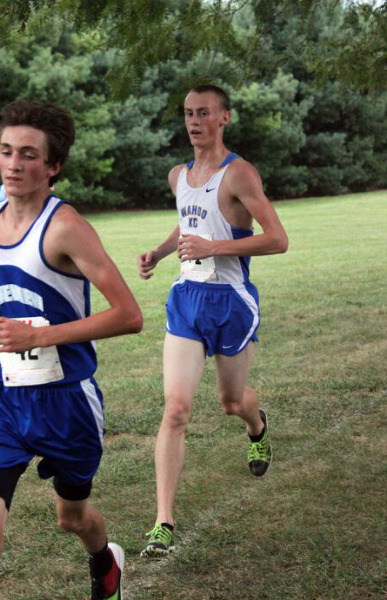 "I felt we competed well against some tough competition," commented Coach Karla Curran. "Almost 50 percent of the kids met or exceeded their race goals. I am super proud of them!"

Next up for the Warriors is the Scotus Invite in Columbus on Sept. 17. Race time begins at 4:30 p.m., when the girls take center stage.

Hot and humid conditions greeted the 2015 Wahoo harriers, as they began their season at the Schuyler Invite on Thursday, September 3.

The day commenced splendidly when the girls' squad placed 6 in the top 14 positions! This garnered a first place finish for the team! 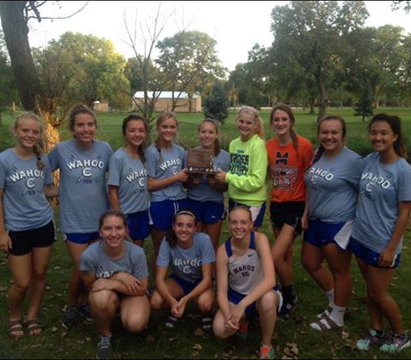 "Considering the conditions, I felt both teams competed fairly well," commented Coach Karla Curran. "We definitely need to keep working hard and pushing ourselves to get into prime shape."

Wahoo will host its own invitational on Thursday, Sept. 10. 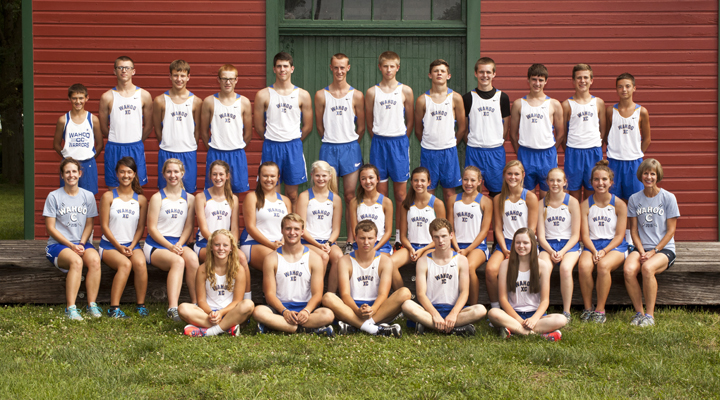 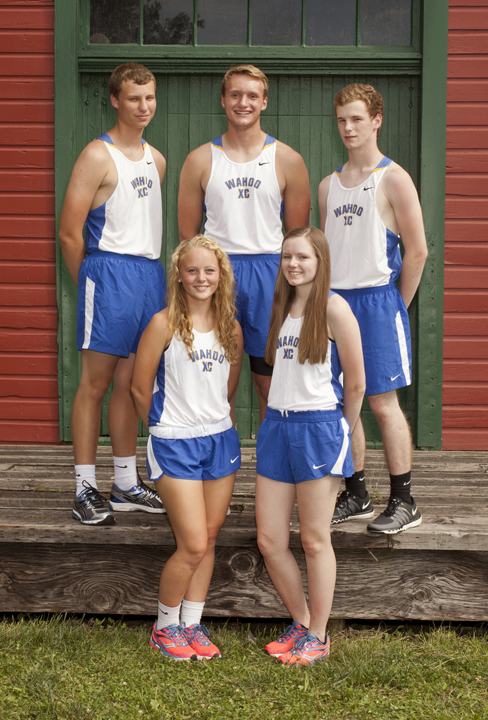