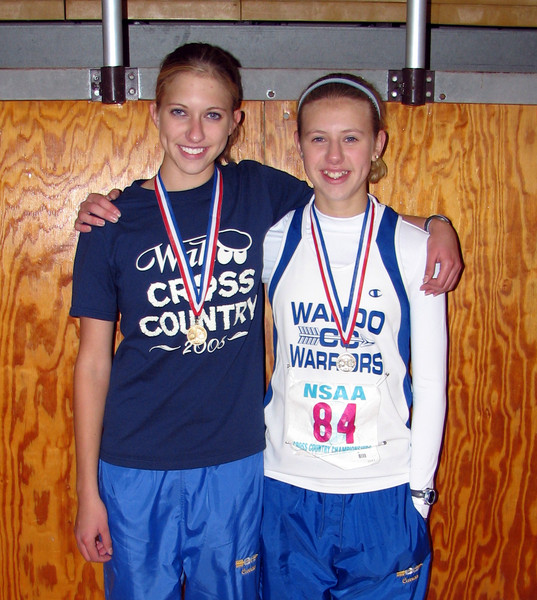 2008 Season Ends with Reason to Celebrate!

On Friday, October 24, at the State Cross Country Championships in Kearney, Erin Curran's dream finally came true. She won the Girls' Class C Cross Country title in a time of 15:16, out-distancing the field by 43 seconds.

To add to the excitement, her sister, Michaela, out-sprinted Meleia Oestmann of Auburn at the finish, to bring home the silver medal for second place. She beat Oestmann by a mere tenth of a second.

"It's nice to go out senior year and win," commented Erin Curran. "I'm so excited for my sister. She has worked very hard this year. The 1-2 finish is the cherry on top of a great day!"

"It was a terrific day for our girls' program. All the girls ran well and got some much needed state experience for next year," said WHS Cross Country Coach Karla Curran.

The boys' team was once again led by Matt Hornung who placed 43rd with a time of 18:33, while Eric Curran finished close behind in 18:36, good enough for 46th place. Next was Nick Dobesh and Sam Cook, who finished in 73rd and 75th place. Rounding out the top six were Kreig Lacey (82) and Anthony Prochaska (86).

"I know some of the boys would like to have run better, but it is an honor to run at the State Meet, when you consider only 12 out of 44 teams get to go," proclaimed Coach Curran. "I am very proud of these young men."

For the first time in three years, both the boys' and girls' cross country teams will appear at the State Cross Country meet, after earning third place team finishes at the C-1 District meet held at Bennington.

The girls' team began the day off right, when the Curran sisters finished 1st and 3rd; Erin with a time of 16:25 and Michaela with a time of 17:06. Next, came Erin Walker who also ran a great race, placing 12th overall with a time of 18:05. Ali Norris, Anmerie Schirmer, and Anna Hornung braved the very difficult course and ran well for the Lady Warriors.

"I am so proud of these two teams. They began the season with a goal of returning to the State Meet. It became a reality today," commented Head Coach Karla Curran.

Stellar performances were turned in by both the boys' and girls' teams at the Capitol Conference Meet held in Fort Calhoun on October 9.

The sister duo of Erin and Michaela Curran went on to repeat their 1-2 finish. Erin finished with a time of 15:26, while Michaela crossed the line in 16:17. Erin Walker also had a great meet and finished 11th in 17:27. Ali Norris ran another personal best time placing 19th, and Anmerie Schirmer and Anna Hornung helped the team to a runner-up title.

"I was extremely proud of the way both teams competed. The girls only finished six points behind last year's Class C State Champions. That is quite an accomplishment! The boys also ran well, and hope to close the gap on Bennington at next week's district meet," commented Head Coach Karla Curran.

The Warriors will compete at Bennington for districts on October 16. Good luck teams!!

The Wahoo cross country teams continued their dominance this week by taking home both the boys and girls team titles.

The girls' team was paced by a 1-2 finish from the Curran sisters. Erin crossed the finish line in 15:22, while Michaela came in at 16:17. Anmerie Schirmer and Ali Norris also turned in personal bests for the 2.5 mile race, and Erin Walker gave a gutsy finish after struggling over the last 600 meters. 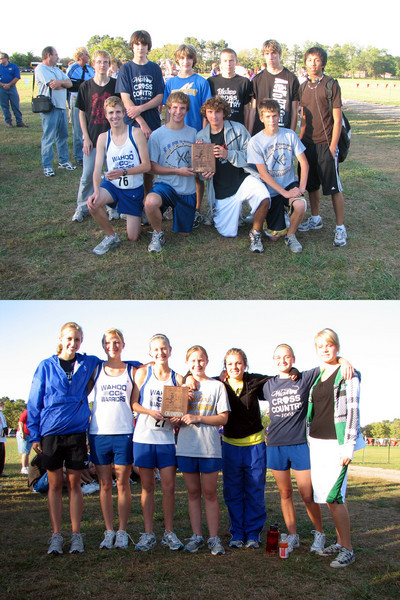 Launch the media gallery 3 player
The WHS boys and girls cross country teams both took first place at the October 2 Lincoln Lutheran meet.
"The girls are really starting to race well. We should be primed and ready for the championship part of our season," commented Coach Karla Curran.

The boys' team also turned in two top-five performances. Eric Curran led the way with a third place finish in 18:22. Matt Hornung ran 18:38 for the 3.1 mile course, which was good enough for fifth place. Kreig Lacey, Sam Cook, and Nick Dobesh took 12th, 14th, and 15th places, respectively. The sixth varsity runner was Tony Prochaska, who narrowly edged out Max Cook by .79 of a second.

"It was wonderful to have both teams come away with a first place finish. This will give us good momentum heading into Conference at Fort Calhoun," Coach Curran added.

The Wahoo Harriers' next competition will be the Nebraska Capital Conference meet at Fort Calhoun on Thursday, October 9 at 4:30 p.m.

The 80+ degree heat didn't seem to phase the Wahoo cross country teams on Thursday, September 25 North Bend Invite. Instead, the Wahoo Harriers turned in some blazing times and left the meet with plenty of hardware.

The girls team was paced by Erin Curran, who won the meet with a time of 15:23. Also burning up the course while running in the top ten were Michaela Curran (6) and Erin Walker (10). Ali Norris, Anmerie Schirmer, and Anna Hornung also ran extremely well and finished in the top 30, placing 22nd, 26th, and 27th, respectively. The girls team finished in second place.

"I could not be more proud of this girls team," commented Coach Karla Curran. "They really competed well against some large Class B teams."

The Warrior boys squad earned a third place finish against some stiff competition. Matt Hornung ran the top performance of the day for the boys team. He placed ninth with a time of 18:07. Eric Curran crossed the line soon after in 12th place in 18:14. Wahoo's next four varsity runners of Nick Dobesh, Kreig Lacey, Sam Cook, and Max Cook all placed in the top 25.

"These young men are working very hard, and it is paying off in our meets," said Coach Curran. "They all continue to significantly improve."

On September 11, in spite of the rainy weather, the Wahoo Cross Country teams had a great day.

The girls' team placed second, and was led by yet another record-setting performance by Erin Curran. Erin crossed the finish line first, in a winning time of 16:02 for the 4000 meter course. Freshman Michaela Curran also ran very well, finishing fourth with a time of 16:47. Erin Walker also cracked the top 10 finishing ninth in 17:32.

"We had three girls place in the top 10 in this meet. That has never happened before," commented Coach Karla Curran.

The boys' squad was led by Eric Curran, who placed fourteenth in 18:12 for 5000 meters. Matt Hornung finished in twenty-first place with a time of 18:33, while Kreig Lacey finished twenty-sixth in 18:52. Sam Cook, Nick Dobesh, and Anthony Prochaska completed the varsity squad, placing thirty-sixth, thirty-eighth, and forty-fifth.

"Nearly everyone improved their times in comparison to last year, in spite of the weather. I really have some hard-working athletes," Curran added.

The boys' squad finished in fifth place, being beaten by three Class B teams and Conference foe, Bennington.

The Warrior Harriers return to action next Friday at Columbus Scotus. The first race is set to begin at 4:30 p.m. 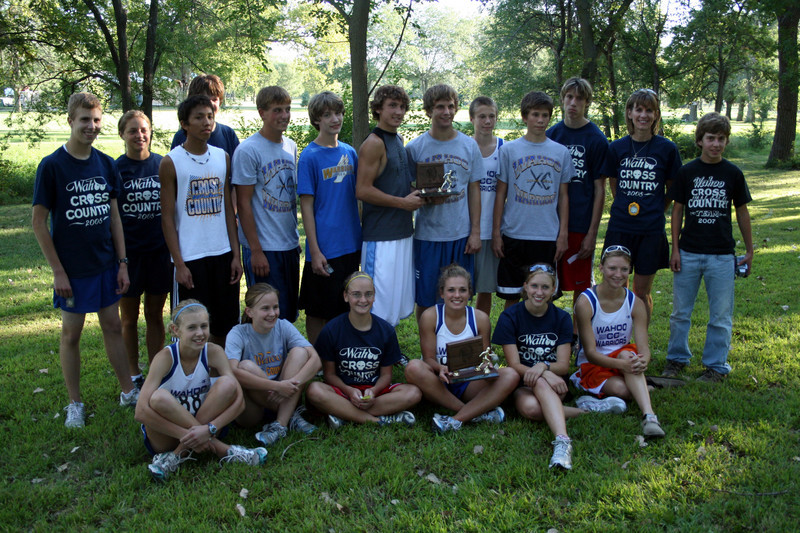 The Wahoo cross country teams began the competitive part of their season on Thursday, September 4, at the Schuyler Cross Country Invitational. Both teams came away with first place team titles.

Erin Curran led the way for the girls' squad, winning the race in a record-setting time of 15:19 for the 4000 meter course. Freshman Michaela Curran and sophomore Erin Walker followed with a second and third place finish, respectively. Ali Norris rounded out the top four with a tenth place finish.

"All the girls ran extremely well given the fact that this was their first race of the season," said Coach Karla Curran.

"We had five gentlemen finish in the top eight. That was a tremendous effort, and said a great deal about the strength of our team," commented Curran.

The harrier's next competition is set for Thursday, September 11 at home in their own W-Club Invitational. The first race is set to begin at 4:30 p.m.