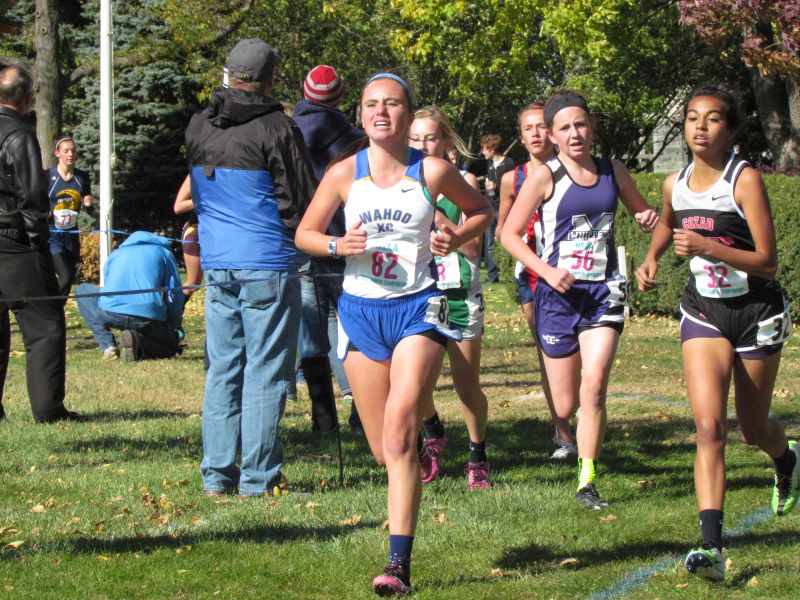 Another cold and blustery day greeted the Wahoo Harriers as they took to the Kearney Country Club Course for the 2013 State Cross Country Championships.

The girls started the day off positively when WHS senior Ronnie Brust led the team to an 8th place finish. Brust ran 21:01 for the 5k course, propelling her to the 11th spot, and a third consecutive state meet medal. 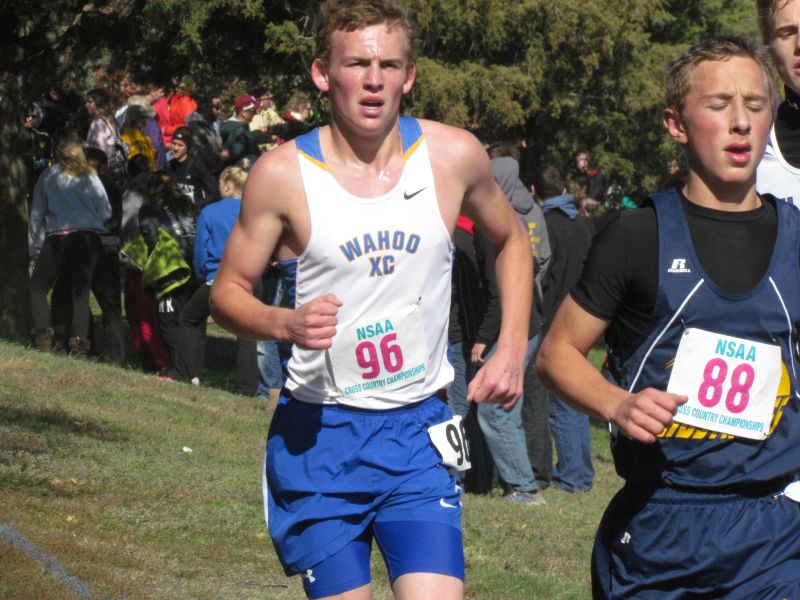 "I couldn't be happier for our girls," commented Head Coach Karla Curran. "we set a goal of finishing in the top ten, and they exceeded that. Also, Ronnie placing for the third time is quite a feat. Only three other girls at Wahoo have accomplished this, so she is among the elite."

Junior Thomas McAtee was the lone Wahoo competitor on the boys side, and he represented Wahoo well. McAtee ran 18:20 for 40th place.

"Thomas had a fine season," replied Curran. "He steadily kept improving, and now he knows what needs to be done to get to the level of medal contention next year."

A cold and blustery day greeted the Wahoo Harriers as they competed in the C-2 Cross Country District Championships on Thursday, October 21, at the David City Golf Course.

The girls' team had a splendid day, when 3 girls placed in the top 12. Ronnie Brust proved she is a state meet contender, with her 2nd place finish in 21:01. Hannah Brust was next for the Warriors placing 11th, and Joelle Anderson ran a new personal best in 22:11 for the 12th spot.

Maddie Talbert (32) and Rachel Hrdlicka (36) both ran personal bests. The girls finished third as a team, so they will have the opportunity to extend their season for one more week, with a final race at the state meet in Kearney.

After a personal best performance at Districts, WHS freshman Maddie Talbert will run with the state-qualifying girls team at State on Oct. 25.
WHS junior Thomas McAtee has been the leader for the Warrior boys in cross country this year. McAtee placed 6th at the Schuyler Invite, and most recently placed 5th at the Sept. 26 North Bend Central Invite.
WHS senior Torben Glaser finished 18th place in the Sept. 26 North Bend Central Cross Country Invite. 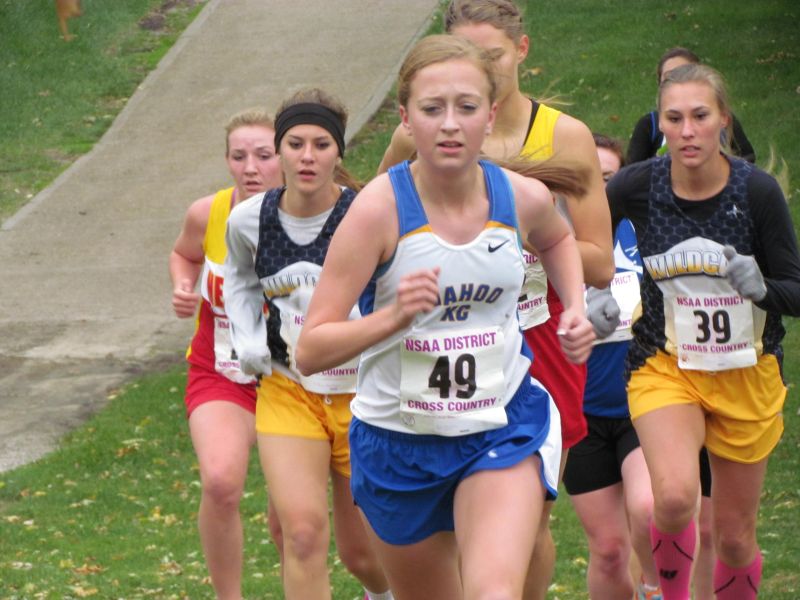 After a personal best performance at Districts, WHS freshman Maddie Talbert will run with the state-qualifying girls team at State on Oct. 25.

"The girls ran extremely well today. Nearly every one of them ran a new PR, and that's what we want this time of year," commented Coach Karla Curran.

The boys competed next for the Warriors in what turned out to be a sensational day for top runner Thomas McAtee. McAtee ran a fine race, while earning an individual state meet berth with his 9th place finish in 18:23.

Dalton Lamprecht and Travis Burkey finished next for the Wahoo Harriers, running in the 30th and 32nd spots, respectively. Next up was Torben Glaeser finishing in 20:24, for 34th place.  The final two Warrior runners were freshmen Matt Dobesh (42) and Sam Brabec (50). The boys finished 6th in the team standings.

"I was very proud of the way our gentlemen finished today," stated Curran. "We are a fairly young and inexperienced team, but they still ran quite well."

A magnificent day to match a beautiful course was the topic of conversation when both Wahoo cross country teams traveled to Two Rivers State Park on Thursday, October 10, 2013, to compete in the Nebraska Capitol Conference Cross Country Meet.

Senior Ronnie Brust helped propel the girls to a 3rd place team finish with her individual title. Brust ran the 5k course in a time of 21:06. Hannah Brust did her part by placing 6th, running 21:45. Joelle Anderson cracked the top 15 with a time of 22:51. The last varsity scorer was Rosie Welsh. Rosie ran a personal best in 26:04. The final two varsity runners for the Warriors were Maddie Talbert (26) and Rachel Hrdlicka (30).

The boys took center stage next, in what turned out to be a record-setting day for Thomas McAtee. McAtee broke 18 minutes for the first time in his career with a time of 17:58. This earned him an 8th place finish and All-Conference honors.

Next for the Wahoo Harriers was Travis Burkey, who ran a season best time of 19:25, which gave him a 23rd place finish. Dalton Lamprecht was next in 19:50, and right on his heels was Torben Glaeser in 19:57. Rounding out the varsity squad was Matt Dobesh (34) and Sam Brabec (36). The gentlemen finished in 6th place in the team race.

"Overall, I was extremely pleased with how well everyone performed," replied Coach Karla Curran. "I couldn't be happier for Ronnie to finish her senior season with the individual conference title. It is well-deserved."

Another warm and humid day greeted the Wahoo Cross Country teams as they converged upon Pioneers Park in Lincoln for the Lincoln Lutheran XC Invitational held on Thursday, October 3, 2013.

The girls' team got off to a strong start with their 2nd place finish. Ronnie Brust once again led the way, when she placed 2nd in a time of 21:28. Next for the Warriors was Hannah Brust in 5th, followed by Joelle Anderson in 10th. Maddie Talbert was next to cross the finish line in 26th place. Rosie Welsh (29), and Rachel Hrdlicka (31), completed the Warriors' varsity squad.

The gentlemen took to the course next, and Thomas McAtee directed the boys' squad flawlessly, running a personal best time of 18:28, securing him a 5th place finish. Dalton Lamprecht was next for the Wahoo Harriers, as he ran a season best time of 20:10 for 24th place. Travis Burkey followed close behind, and finished in 29th. Senior Torben Glaeser was the final scorer for the Warriors, running 21:03 for 36th place. Sam Brabec (42) and Shane Nixon (55) completed the Wahoo varsity line-up. Wahoo senior McKenna Hansson ran in his first high school race, and finished in 82nd place.

"Overall, I was pleased with our performances. The girls did a splendid job, placing three in the top ten," commented Coach Karla Curran. "Thomas and Dalton ran season bests, and that is what we need this time of the year."

The girls' team got off to a fabulous start when Ronnie Brust took home the individual title with a time of 21:47! Sister Hannah Brust placed 4th in 23:30, while Joelle Anderson finished 10th, and Maddie Talbert 14th. Rosie Welsh and Rachel Hrdlicka completed the Warriors' varsity squad, running 17th and 23rd, respectively.

"To have 4 girls medal was a fantastic feat!" commented Coach Karla Curran. "It is a testament to the girls' hard work."

The boys' team also ran well, and was led by Thomas McAtee's 5th place finish in 18:31. The final Warrior to medal was Travis Burkey, who completed the course in 20:01. This garnered him a 15th place medal. Dalton Lamprecht ran a fine race, placing 17th with a time of 20:40. Next for the Wahoo harriers were Torben Glaeser (18th), Matt Dobesh (19th), and Shane Nixon (20th).

A damp and blustery afternoon welcomed the Wahoo Cross Country teams as they traveled north to the Columbus Scotus Invite on Thursday, September 19.

The girls' team was once again directed by senior Ronnie Brust, with her 8th place finish in a time of 20:51. Next for the Wahoo harriers was Hannah Brust, completing the difficult course in 22:16, which was good enough for 20th place. Junior Joelle Anderson placed 22nd, while Maddie Talbert was Wahoo's final scorer, running 25:53 for 63rd place. Rosie Welsh (77) and Rachel Hrdlicka (88) also ran well for the Warriors.

The boys' team placed 8th overall, and junior Thomas McAtee led the way, placing 10th with a time of 18:15. Travis Burkey crossed next for the Warriors, running 19:41 for the 5k course. This finish helped him to 38th place, overall. Matt Dobesh (48) and Torben Glaeser (49) completed the Wahoo scorers. Freshman Sam Brabec also ran well, mastering the hilly course in 21:09. Both Dalton Lamprecht (85) and Shane Nixon (97) experienced stomach issues during the race, but were able to finish.

"This meet is one of the toughest on our schedule," commented Coach Karla Curran. "I am proud of the way many of the kids responded, but we definitely still have some work to do."

The Wahoo cross country teams got off to a strong start on Thursday, September 5, when they traveled to Schuyler for their first meet of the season. The girls' team led the way with a first place team finish. Senior Ronnie Brust was the individual champion, breaking the tape in 21:42 for the 5000 meter course. Ronnie's younger sister, Hannah, was the next Warrior to finish, running 22:43 for 2nd place. Junior Joelle Anderson placed 4th overall, while Maddie Talbert completed the Wahoo scorers, placing 14th. Rosie Welsh cracked the top 20 with her 18th place finish, and Rachel Hrdlicka rounded out the varsity squad, running in the 31st position.

The boys' team was led by junior Thomas McAtee. McAtee placed 6th overall with a time of 19:10, and teammates Travis Burkey and Dalton Lamprecht squeezed into the top 20, snagging the last two spots at 19th and 20th, respectively. Next for the Warriors were Cole Talbert (26) and Torben Glaseser (27). Completing the varsity squad was Matt Dobesh, finishing with a time of 21:45 for 42nd place. Sam Brabec (46) and Shane Nixon (51), also ran for the Warriors.

"Overall, it was a very good day," commented Coach Karla Curran. "Nearly everyone met or exceeded their goal times, so it was definitely a positive experience for everyone."

Next up for the Wahoo harriers is their own home invitational on Thursday, September 12. The first race begins at 4:15 p.m. 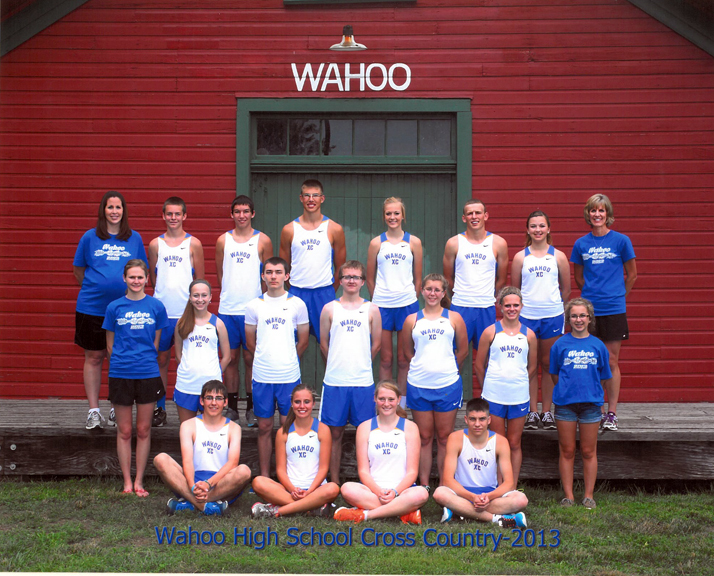 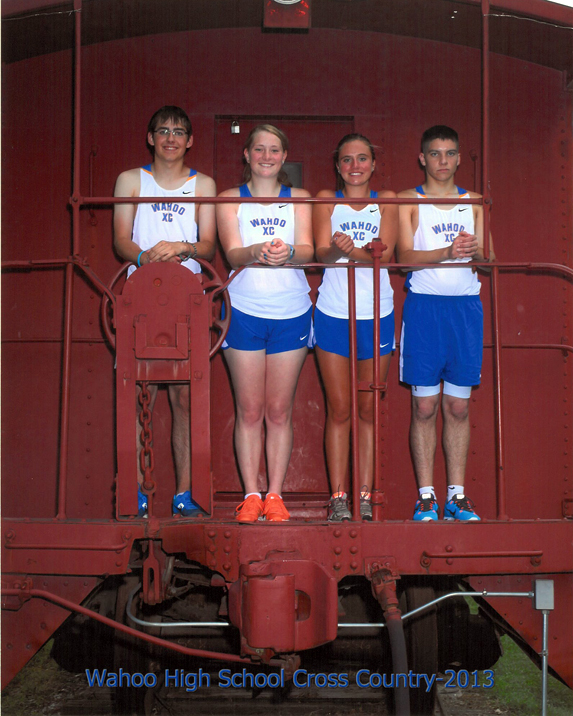