The Wahoo cross country teams ventured west to Kearney last Friday, October 24, to compete against the best in the state at the Nebraska State Cross Country Championships held at the Kearney Country Club.

The girls’ team was first to take the stage at the biggest meet of the season. Freshman Sydney Nicholls ran well despite the weather, and finished in 22:49 for 38th place. Hannah Brust was affected by the hot conditions, however, and placed 54th with a time of 23:37. Joelle Anderson was next for the Lady Warriors, running 25:51 for 74th place. Korena Edmonds and Payton Styskal completed the varsity squad, running 79 and 86, respectively.

“It was quite an accomplishment just to get to the state meet for these girls,” commented Coach Karla Curran. “They overcame such adversity by season’s end. I’m excited for the future of our program.”

Thomas McAtee was the lone boy competing for Wahoo, but his performance did not go unnoticed. McAtee ran his best tactical race of the season, and earned a 31st place finish, running 18:41 for the 5k course. McAtee earned great praise from his coach.

“Thomas and I discussed changing up his race plan due to the heat,” Coach Curran said. “He stuck to the plan we suggested, and ended up feeling strong during the last 1000 meters of the race. He looked great! I’m super proud of him and his senior campaign!” 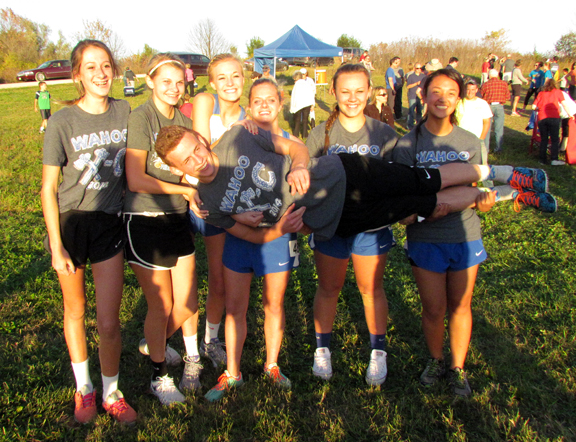 The Warrior Cross Country teams recently trekked to Willowland Lake just south of Valparaiso, to compete in the district C-1 cross country meet, held on October 16. The girls’ team began the day on a positive note, when they placed third in the team standings, earning them a state meet berth.

Leading the way for the lady harriers was freshman Sydney Nicholls. Nicholls placed 4th with a time of 22:42, for the challenging 5k course.

Next for the Warriors was Hannah Brust, who ran 23:06, earning her a 7th place finish, and All-District honors. Squeaking into the top 20 was senior Joelle Anderson, running 24:53, for 19th place. Completing the varsity squad were Korena Edmonds and Payton Styskal, who ran in the 36th and 42nd spots, respectively.

“I’m extremely proud of these girls today,” commented Coach Karla Curran. “They have been through so much these last two weeks, and to overcome such adversity and rise to the challenge says a great deal about these girls’ tenacity.”

The boys’ team didn’t fare quite as well, due to their top runner, Dillon Rademaker, going down during the race with a broken tibia; yet, in spite of such calamity, the remaining boys responded with some of their best performances of the season.

Next for the Warriors was Kahleb Elliott, running 19:08 for 18th place. Caleb Groff cracked the top 30 with a time of 19:50, and Alex Abbott was right on his heels in 31st place. Completing the varsity squad was Dalton Lamprecht, who finished in 41st with a time of 20:49.

“I know the boys were disappointed when Dillon went down, but they responded so well with some very good performances, on an extremely difficult course,” replied Curran. “They have a lot to be proud of today.”

Senior Thomas McAtee led the way with his 9th place finish in a time of 18:14, earning him All-Conference honors.

Next for the Warriors were freshmen Kahleb Elliott and Caleb Groff, who placed 15th and 22nd, respectively. Alex Abbott was the next harrier to cross the finish line, running for the 25th spot in 19:45. The final varsity runner for the Warriors was Dalton Lamprecht, who turned in his best time of the season at 20:07, for a 31st place finish.

“I was extremely proud of the way the gentlemen competed today,” commented Coach Karla Curran. “Every one of them ran a season best, so they are really started to run well at the right time.”

As for the girls, Hannah Brust once again led the way with her 11th place finish. Joelle Anderson was next for the lady Warriors, finishing 19th in 24:49. The last runner for the Wahoo harriers was Korena Edmonds, who ran a personal best for the 23rd position. The girls were without their other three varsity runners this week due to a car accident, so they weren’t able to compete for team awards.

“The girls ran quite well, considering what took place within the last 24 hours,” stated Curran. “They focused on running their very best, and I believe all three accomplished that goal.”

The Warriors head into district competition this week when they travel to Wildwood Lake to compete in the C-1 district meet on Thurs., Oct. 16. The girls’ race is set to begin at 4:30 p.m., with the boys to follow at 5:15 p.m.

The girls’ team began the day on a positive note, when three Wahoo harriers turned in their best times of the season! Hannah Brust was the first to cross the finish line for the Warriors, finishing in 9th place. She ran 23:00 for the flat and fast course.

Next up for the Warriors was Sydney Nicholls, while teammate Kylee Jones was right on her heels. They finished 10th and 12th, respectively. Completing the varsity squad were Korena Edmonds (30), and Payton Styskal (31).

“I was extremely proud of the way our girls competed today,” stated Coach Karla Curran. “To place 3rd without our number two runner, Joelle Anderson, was a testament to how hard these girls worked.”

The boys’ team stepped up to the challenge as well, and like the girls, turned in some excellent performances. Dillon Rademaker clocked the best time of the day for the Wahoo harriers, running 17:47, for 3rd place.

Close behind was Thomas McAtee, breaking the 18-minute barrier, running 17:59, for 6th place. Freshman firecracker, Kahleb Elliott, cracked the top 25 with his 19:11 performance for the 5000-meter course. Another freshman, Caleb Groff, also ran extremely well, finishing in the 28th spot with a time of 20:03.

“Overall, these gentlemen ran extremely well,” commented Coach Curran, “Many set personal bests, so as a coach, I couldn’t ask for anything more.”

A warm and sunny afternoon greeted the Wahoo Cross Country teams as they trekked northward to the Columbus Scotus Invite on September 18, 2014.

The girls' team was once again led by sophomore Hannah Brust with her 23rd place finish in 23:38. Next up for the Wahoo harriers was Sydney Nicholls, who ran to a 28th place finish in 24:09. Freshman Kylee Jones was not far behind in 24:13, which was good enough for 29th place. Closing out the scorers for Wahoo was senior Joelle Anderson, who ran 25:04 for the 36th spot. Also running for the Warriors were Paige Fritz (61), Korena Edmonds (67), and Payton Styskal (73).

The boys' team continued their strong 1-2 punch, with Dillon Rademaker finishing in 7th place with a time of 18:17. Following close behind was senior Thomas McAtee, who finished the demanding course in 18:26 for the 12th position. Freshman Kahleb Elliott was the next to cross the finish line, running 19:31 for the 5k course. Completing the Warrior scorers was Caleb Groff, who finished in 19:58, which was good enough for 40th place. Alex Abbott (58) and Matt Dobesh (63) rounded out the Warrior varsity squad. Dalton Lamprecht (64), Tayler Cuda (66), Shawn Knowlton (72), Shane Nixon (78), Bryson Keller (80), Sam Brabec (85), Tyler Timm (95), Josh Johnson (119), Josh Nuckolls (126) and Tyler Ruzicka (131) also ran well for the Warrior harriers.

"I am especially proud of the 4th place finish by the boys' team," commented Head Coach Karla Curran. "They beat some very good teams today. In terms of the girls, we were hindered by sickness, but some of the underclassmen stepped up to fill the void. Overall, I'm generally pleased with the results."

Coach's article will be posted soon...

The Wahoo Cross Country teams got off to a valiant start this season as they traveled to Schuyler on Thurs., Sept. 4.

The girls' team led the way with a strong first place finish. Sophomore Hannah Brust took home top honors in the girls race, running 22:39. Following Brust was Joelle Anderson, running 23:25 for a 4th place finish. Sydney Nicholls and Kylee Jones were the next Warrior harriers to cross the finish line, cracking the top 10 in 9th and 10th place, respectively. Rounding out the girls' squad were Paige Fritz (25), Korena Edmonds (27) , and Payton Styskal (28).

The boys' team was led by senior captain Thomas McAtee. McAtee placed 4th overall with an impressive time of 18:21 for the 5k course. Dillon Rademaker finished in 18:41, just one spot behind McAtee in 5th place. Dalton Lamprecht was next, finishing in the 20th spot with a time of 20:45. Freshman Caleb Groff, and senior Alex Abbott squeezed into the top 25, snagging the 23rd and 25th spots, respectively. Completing the varsity squad was Sam Brabec finishing with a time of 21:23 for 30th place. Shawn Knowlton (31), Matt Dobesh (36), Tayler Cuda (44), Bryson Keller (45), Shane Nixon (46), Josh Johnson (69), Josh Nuckolls (74), and Tyler Ruzicka (76), also ran for the Warriors.

"It was a great first meet," commented Head Coach Karla Curran. "Many kids met or exceeded their goal times, and walked away with some hardware. I am pleased with the results!"

Next up for the Wahoo harriers is their own home invitational on Thursday, September 11. The first race is set to take off at 4:00 p.m. 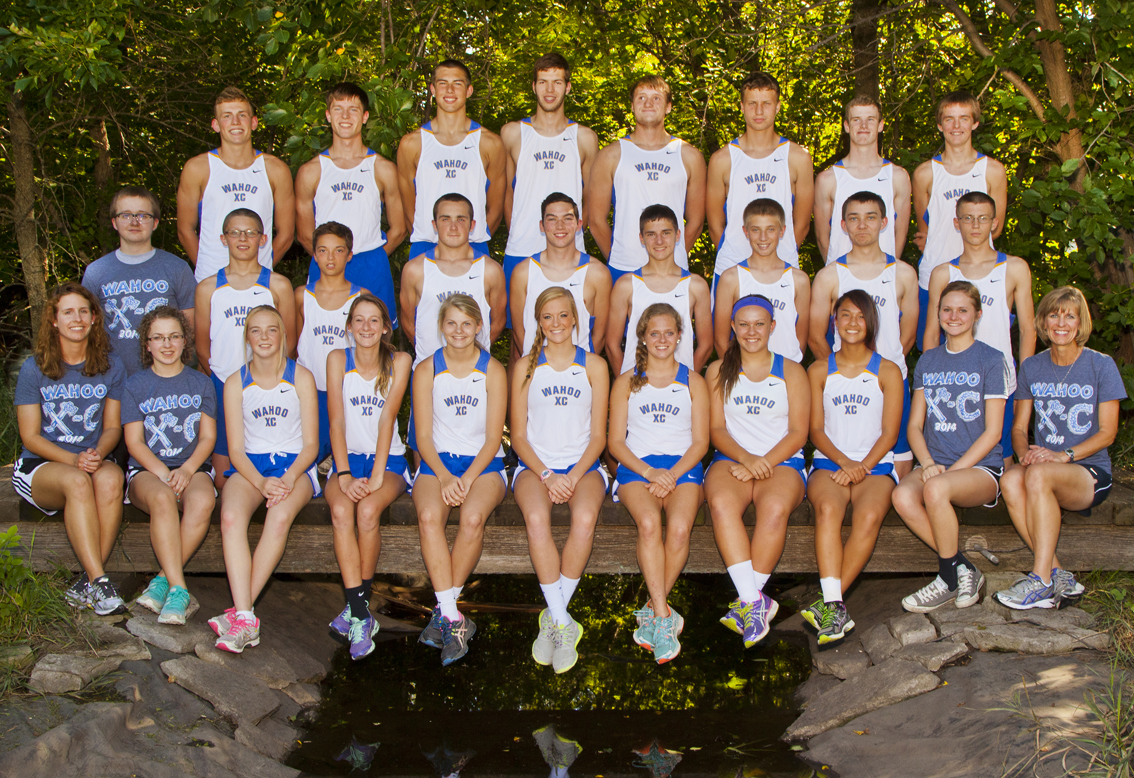 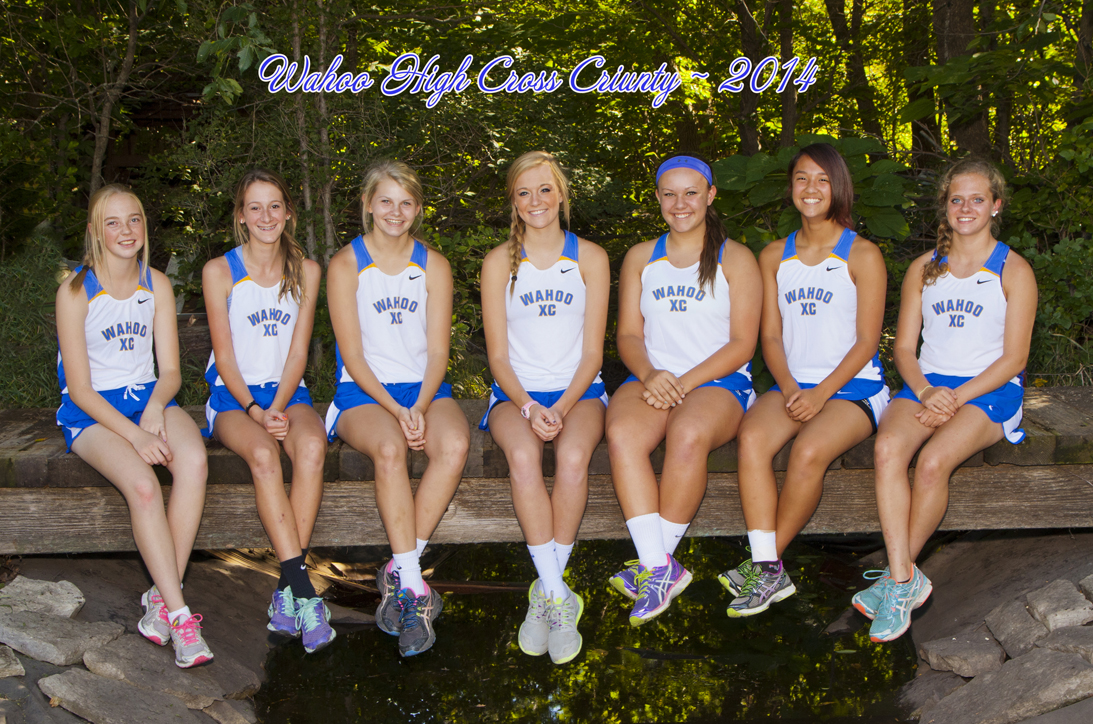 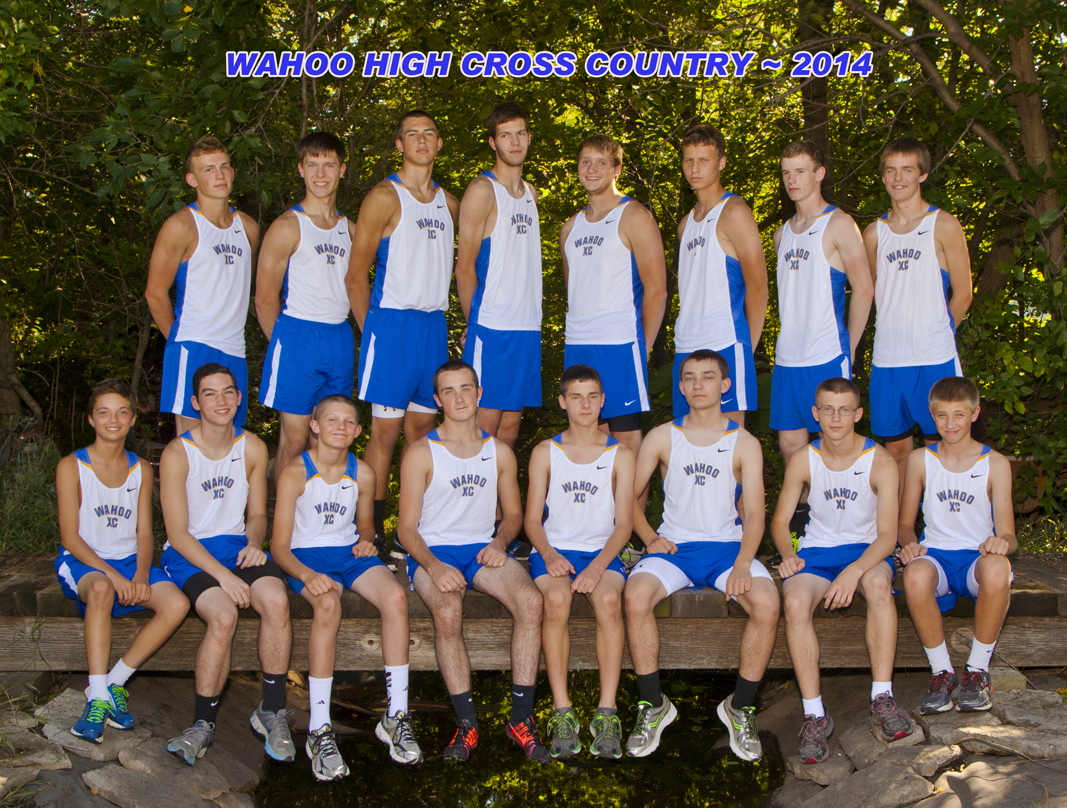