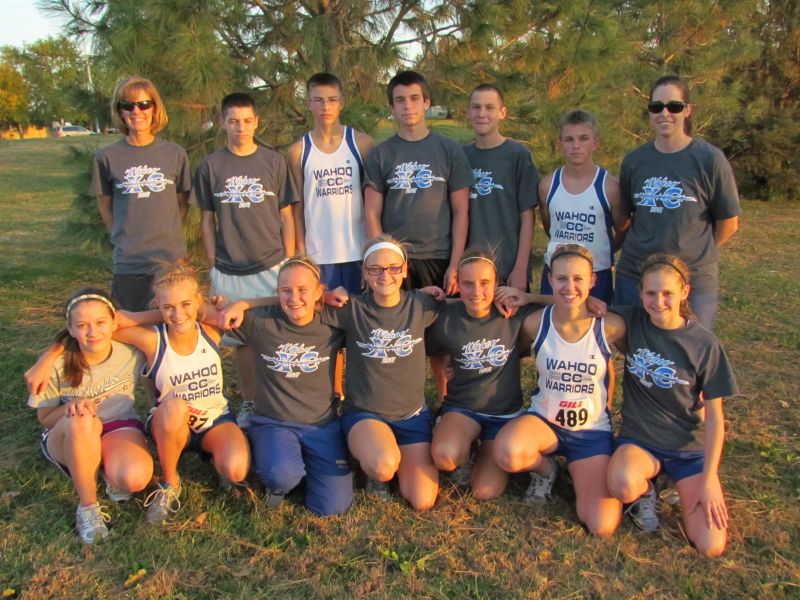 That beautiful day was soon clouded when Wahoo's top runner, Michaela Curran, took a wrong turn with about 250 meters remaining in the race. Curran, leading by 20 seconds, became disoriented and turned at the wrong spot. As a result, she had to turn around and retrace her steps.

Already tired from running the extra 75 meters, she struggled to the finish line placing sixth. Curran was later taken to the hospital and treated for dehydration.

Despite Curran's distress, sophomore Ronnie Brust had an outstanding race, placing second in a time of 16:28. Freshmen Joelle Anderson and Rachael Meyer also ran tough, both placing in the top 20, running 18:07 and 18:16, respectively. Rounding out the Warrior varsity were seniors Anmerie Schirmer (42) and Anna Hornung (45). The girls team placed 3rd, qualifying for the 2011 State Cross Country Meet!

"It was a disappointing end to the race with Michaela struggling to finish," commented Head Coach Karla Curran, "but I am thankful she and her teammates are headed to state in spite of this misfortune."

The Wahoo boys team finished seventh at the meet and were led by Derek Hamar's fifteenth place finish.

"Derek had an outstanding day! He has worked very hard to earn a trip to state,"  remarked Curran.

Zack Gropp was next to cross the finish line in 19:54, good enough for 24th place. Sophomore Travis Burkey finished in 28th, while freshman Dalton Lamprecht closed out his season running a personal best of 22:41 for the 5000 meter race. Alex Talbott completed the Wahoo scorers placing 56th in 23:46.

The 2011 NSAA State Cross Country Meet will be Friday, October 21 at the Kearney Country Club. The Class C girls race will begin at 12:00 noon, and the Class C boys will begin their race at 1:00 p.m. 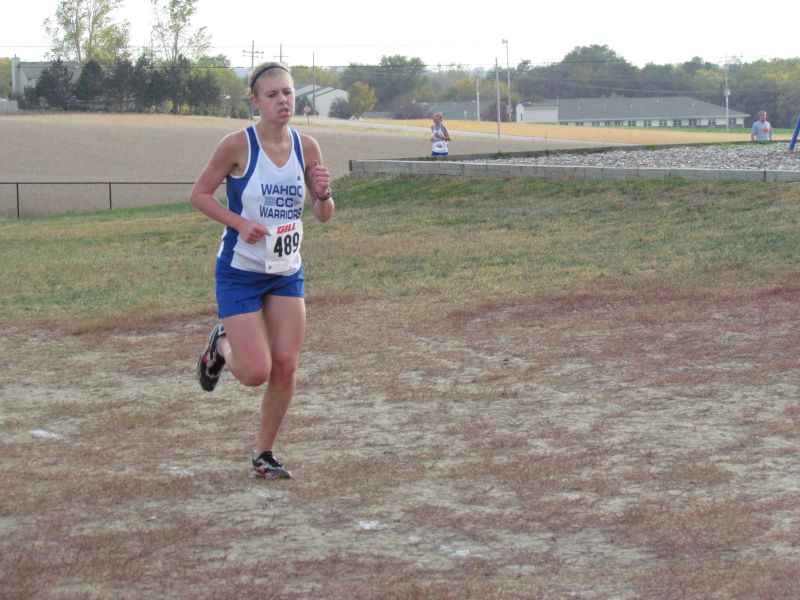 The girls' top performance came from Michaela Curran, who finished the day as the Capitol Conference Champion, running 15:58. 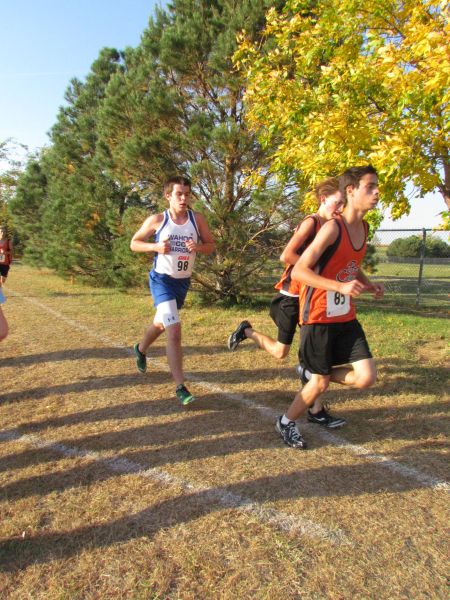 
Ronnie Brust placed third, with a time of 16:34, while Rachael Meyer and Joelle Anderson placed 14th and 17th, respectively. Anmerie Schirmer ran 20:09 for 22nd place, while Anna Hornung completed the course in 20:49 for 26th.

"The girls competed well today," commented Coach Karla Curran. "They held their own against a fine Fort Calhoun squad. I am really proud of them!"

In the boys' race, Derek Hamar was the first Wahoo Harrier to cross the finish line in 19:26 for 17th place. Travis Burkey was next in 19:46 at 20th. Next came Zack Gropp in 24th, while Alex Talbott and Dalton Lamprecht paced each other for 37th and 38th place. Collin Nadrchal was unable to finish the race due to dehydration. The boys' team finished in sixth place.

"Some of our gentlemen didn't respond well to the heat, but Alex Talbott and Dalton Lamprecht did improve their times significantly from our first home meet in September," replied Curran.

Despite recent illness which has plagued both Wahoo cross country teams this past week, the Wahoo Harriers put on some good performances at the Lincoln Lutheran Invite held at Pioneers Park on September 29.

The girls' team was led by Michaela Curran's second place finish in 16:11. Ronnie Brust was third in 16:59, and Joelle Anderson and Rachael Meyer placed 14th and 16th, respectively.

Completing the varsity squad was Anmerie Schirmer running 20:50 for the 4000 meter race, and Hannah Storm at 22:31.

"We competed fairly well, in spite of the fact that many were suffering from bronchitis or some form of respiratory illness," commented Head Coach Karla Curran. "We just need to get everybody 100% healthy for Conference next week."

The boys finished fourth out of ten teams.

"The gentlemen did a fine job, today," replied Coach Curran. "I wanted them to finish in the top half of the team standings, and they accomplished that."

Up next for the Wahoo Harriers is the Capitol Conference meet next Thursday, October 6, at Wahoo. The first race is set to begin at 5:00 p.m.

The Wahoo Harriers recently traveled to Columbus to compete in the Scotus Invitational on Thursday, September 15.

The cloudy and cool conditions helped the Warriors turn in some magnificent performances on a very difficult course.

The girls' team was once again led by Michaela Curran, who ran 15:39 for a fifth place finish.

Ronnie Brust was the only other medalist, who raced to a seventh place finish in 16:33.

Joelle Anderson, Rachael Meyer, Anmerie Schirmer, and Anna Hornung completed the remainder of the varsity squad. They placed 28, 45, 56, and 62, respectively. The team finished fourth out of fourteen teams.

In the boys' race, the top Wahoo Harrier was Derek Hamar. Hamar ran an outstanding race and finished in 18:48 for a 24th place finish.

Next for the Warriors was Zack Gropp running 18:56 for 31st place.

Travis Burkey had another fine day and completed the course in 19:01, good enough for 34th. Rounding out the Warrior varsity squad was Alex Talbott (88), Collin Nadrchal (96), and Dalton Lamprecht (107). The Warrior boys finished seventh in the team standings.

"Overall, I thought we had a terrific day," commented Coach Karla Curran. "The competition was fierce, but we held our own."

The weather was deemed nearly perfect as the girls' team set the pace with many fine performances on the 4000-meter course.

WHS senior Michaela Curran led the way with a record-setting performance. She ran 15:40, and broke the old course record by 19 seconds.

"I could not be more proud of Michaela's performance. She ran a terrific race against some tough competition!" commented Wahoo Head Coach Karla Curran.

Ronnie Brust had an outstanding day as well, placing eighth in 17:09. She beat her personal best on the home course by over one minute.

"Every one of these girls improved from last week's meet in Schuyler. They are working hard and it is paying off!" Curran added.

The boys' team also continued to improve from last week.

The gentlemen were led by junior Zack Gropp, who placed 33rd with a time of 19:03. Not far behind was Derek Hamar in 19:05, which was good enough for 34th place.

"The boys continue to improve," commented Curran. "That's exactly what you want to see as a coach."

The Wahoo Harriers travel to Columbus this week to compete in the Scotus Invitational. The first race is set to begin at 4:30 p.m.