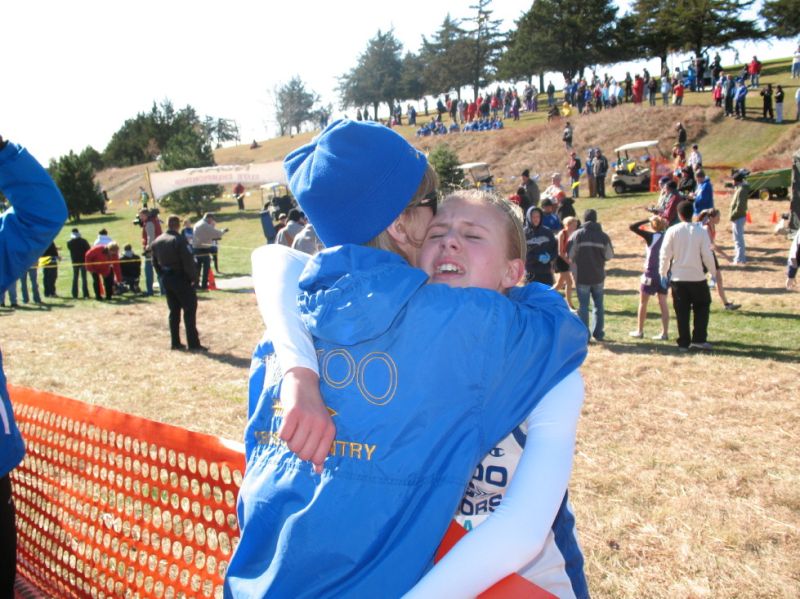 The Kearney Country Club was the place to be on Friday, October 23, as hundreds of athletes competed in the Nebraska State Cross Country Meet.

Three Wahoo Harriers earned a chance at running against the best in the state. Michaela Curran was the lone girl competing for Wahoo. After placing second last year to her older sister, Erin, Michaela came out the victor in this year's Girls' Class C race. Taking the lead with about 1000 meters remaining, Curran cruised to the victory, running 15:46.7 for the 4000-meter course. Her nearest competitor finished 18 seconds behind. Curran's time was 13 seconds better than last year. 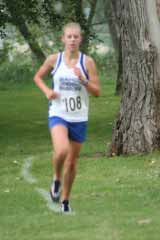 WHS Sophomore Michaela Curran
When asked about her race, Curran exclaimed, "I ran my best, and the Lord did the rest!"

On the boys' side, Jake Barry and Matt Hornung ran for the Warriors. Running for the first time at state, Barry had an impressive showing placing 40th in a time of 18:21.8.

"Jake's goal going into the meet was to place in the top 40, so he accomplished what he set out to do," commented Head Coach Karla Curran. 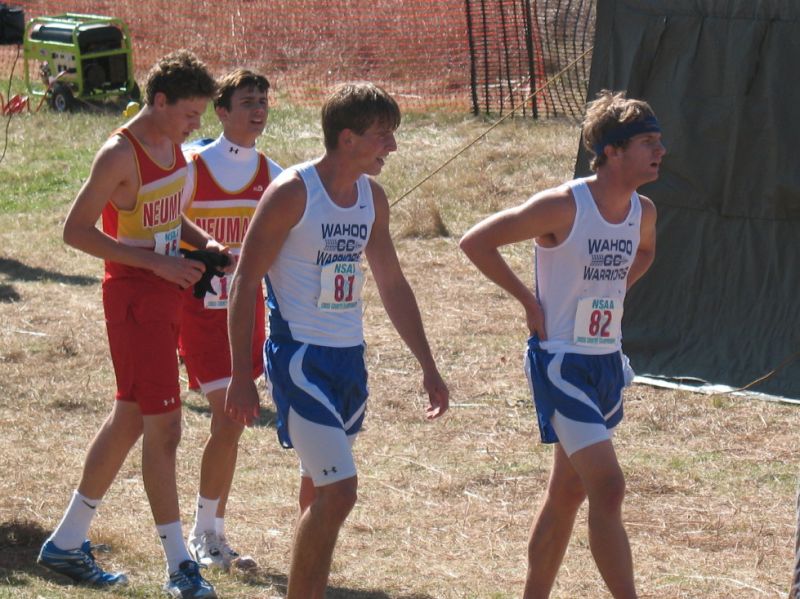 Matt Hornung was the second Warrior Harrier competing for Wahoo. Hornung finished the course in 18:48.4, good enough to earn a 62nd place finish.

Both teams placed sixth out of the eleven schools that competed. The girls' team was again led by Michaela Curran, who placed first in a time 16:03. Her closest competitor trailed by 26 seconds.

"All of the girls ran personal bests on this course," commented Coach Karla Curran. "I was so proud of their efforts!"  Erin Walker, Wahoo's second runner, was unable to finish the race due to the flu.

For the boys' squad, two individuals qualified for the state meet in Kearney. Jake Barry placed seventh and Matt Hornung placed fifteenth, both running season best times on their home course. Sam Cook placed twenty-first, improving his time by nearly twenty seconds. The last scorer for the Warriors was Max Cook, who ran the best race of his career, placing thirtieth in a time of 18:06. Nick Dobesh (39th) and Zach Jansa (46th) also ran for the Warriors.

"I was sad that the season had to come to an end for some of these kids," said Coach Curran, "but it was satisfying to see how hard and well they competed, today!"

The Wahoo Harriers traveled to Raymond Central on Thursday, October 8, to compete at the Capitol Conference Cross Country meet on a cold and windy day.

Both teams came home with third place finishes. On the girls' side, sophomore Michaela Curran led the way with the first cross country conference title of her career. She ran 16:21 for the 4000 meter course, outdistancing her nearest competitor by 46 seconds.

Teammate Erin Walker turned in a fantastic performance, by placing fifth with a time of 17:50. Anmerie Schirmer and Alexandra Norris also ran very well, with both placing in the top 20. Katie Sloup and Anna Hornung completed the Wahoo scorers by placing 21st and 22nd, respectively.

The boys' team was once again led by Jake Barry, who placed sixth in a time of 18:40. Matt Hornung also turned in a solid performance with his tenth place finish, running 19:04 for the 5000 meter course. Sam Cook was close behind Hornung, coming in at 19:08. The effort was good enough for 12th place. Juniors Nick Dobesh, 16th, and Zach Jansa, 21st, also competed hard, placing in the top 25.  Zack Groppe completed the Wahoo Harrier scorers with his 27th place finish.

"I was happy to see so many of the kids run well,"  commented Head Coach Karla Curran. "We are just starting to roll, now that we have many feeling better after some sickness and injuries hit both teams the past couple of weeks.  I am anxious to see how we compete next week at Districts."

The Class C-1 District Cross Country meet will be hosted by Wahoo this year. The October 15 meet is set to begin at 4:30 p.m.

The Wahoo Harriers competed well on Thursday, October 1, at the Lincoln Lutheran Invite in spite of some injuries and illness plagued by each team.

The girls' team was once again led by Michaela Curran's outstanding performance of 15:40 for the 4000-meter race. This gave her a second place finish. Wahoo's number two runner, Erin Walker, was unable to compete due to a sore arch, but Anmerie Schirmer picked up the slack in Walker's absence, and placed 18th in a time of 18:53. Ali Norris ran 19:13, good enough for 25th place. Anna Hornung was Wahoo's last scorer running 19:28 for 30th, while Katie Sloup ran in 32nd place. The girls' team placed fifth overall.

On the boys' side, Jake Barry led the way with a fourth place finish running 18:15, while Sam Cook placed 10th with a time of 18:55 for the 5000-meter course. Matt Hornung placed 13th, and Nick Dobesh, 19th, to round out the Wahoo scorers. Max Cook and Alex Talbott completed the Warriors' team, placing 20th and 47th, respectively. The boys' team finished in 3rd place behind Louisville and Lincoln Lutheran.

"We just need to get some key people healthy again," replied Coach Karla Curran. "I am extremely pleased with how many athletes ran today, despite these obstacles. Michaela, Jake, and Sam, in particular, performed well. Also, many on the girls' team ran personal bests."

The Wahoo Cross Country teams competed on Friday, September 18, at the Columbus Scotus Invitational. The weather was warm, and the course difficult, but the Wahoo Harriers ran well despite these obstacles.

The girls' team placed fourth out of fourteen schools, and was once again led by Michaela Curran's sixth place finish in a time of 16:27. Erin Walker continued to improve and placed eighth, running the course in 16:55. Anmerie Schirmer and Anna Hornung rounded out the varsity scorers placing 35th and 37th, respectively. Ali Norris, 58th, Katie Sloup, 66th, and Tylar Vanryckeghem, 69th, also ran for the Warriors.

The boys' team placed sixth out of sixteen schools, and senior Matt Hornung led the way with a time of 17:36, which garnered him a 13th place finish. Jake Barry once again brought home some hardware placing 20th in a time of 17:57. Sam Cook and brother Max completed the scorers for the Harriers placing 34th and 35th. Nick Dobesh, 47th, Zack Groppe, 55th, Zack Jansa, 63rd, and Alex Talbott, 131st, concluded the Harrier squad.

When asked about the performances by her teams, Coach Karla Curran replied, "As a whole we competed fairly well today, but we still have much room for improvement. I am confident that we will continue to get better."

The Wahoo Harriers started off the 2009 season right on Thursday, September 3, when both squads took home team titles at the Schuyler Invite.

The girls' team was led by Michaela Curran's 1st place finish. Curran ran a personal best time of 15:56 for the 4000m course.

Rounding out the top 10 was Jake Barry, who finished 9th in 19:07. Max Cook and Joel Gensler competed at the varsity level, placing 14th and 18th respectively. Completing the team scoring were Zach Jansa, Zack Gropp, and Alex Talbott, who all ran personal best times.

"I am very pleased with how both teams competed today," commented Coach Karla Curran. "It was a perfect way to begin the season."

The Wahoo Harriers will compete at home next week, Thursday, September 10, with a 4:30 p.m. start for the girls' race. The teams encourage all faculty and student body to come out to support them!