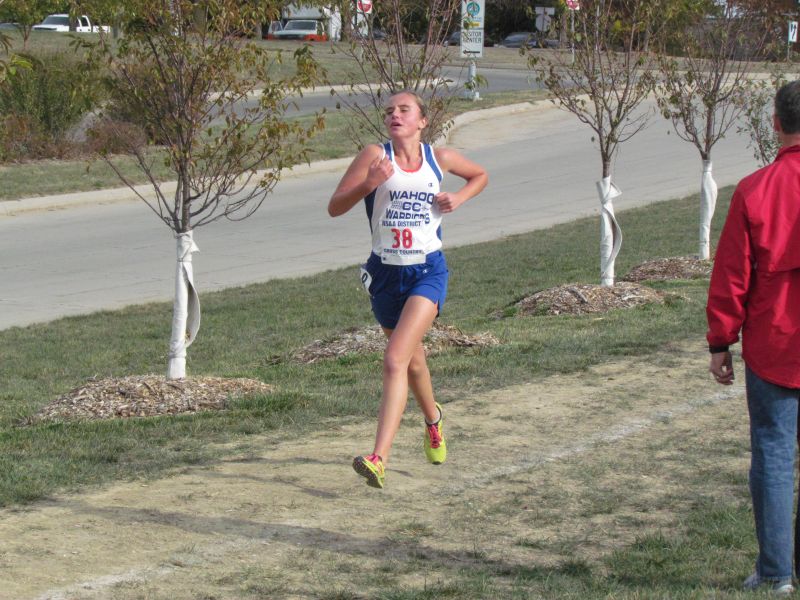 The girls' team started the day off right, when junior Ronnie Brust ran 16:09 for the 4000-meter course, earning a 12th place finish. It was the second year that Brust received a medal.

"Ronnie ran a great race. The field was full of talented runners, so to earn a medal was a tremendous feat," commented Coach Karla Curran.

Tschida Johnson was the second Warrior to cross the finish line, placing 37th with a time of 17:10. Joelle Anderson ran 18:13 for 71st place, while Rachel Hrdlicka ran 22:09 for the 87th spot. The girls' team finished 11th in the team standings.

"I was very proud of all these kids, as they worked so hard to earn a trip to state," Curran said. "Running at this meet provided valuable experience for next season."

A cold and blustery day welcomed the Wahoo Harriers to Boys Town for the Class C-1 District Cross Country meet on Thursday, October 11, 2012. 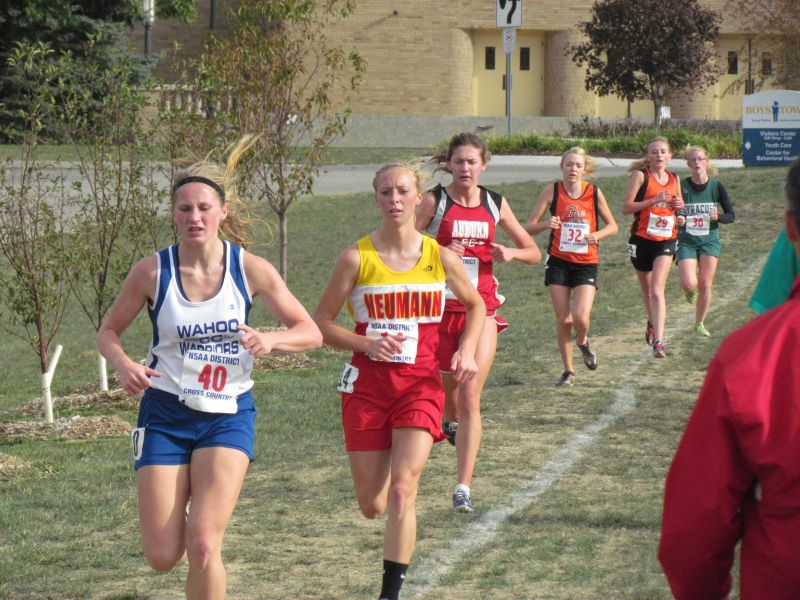 "We had a race plan going into the meet, and each one of the girls carried it out flawlessly. I could not be more proud," commented Head Coach Karla Curran. 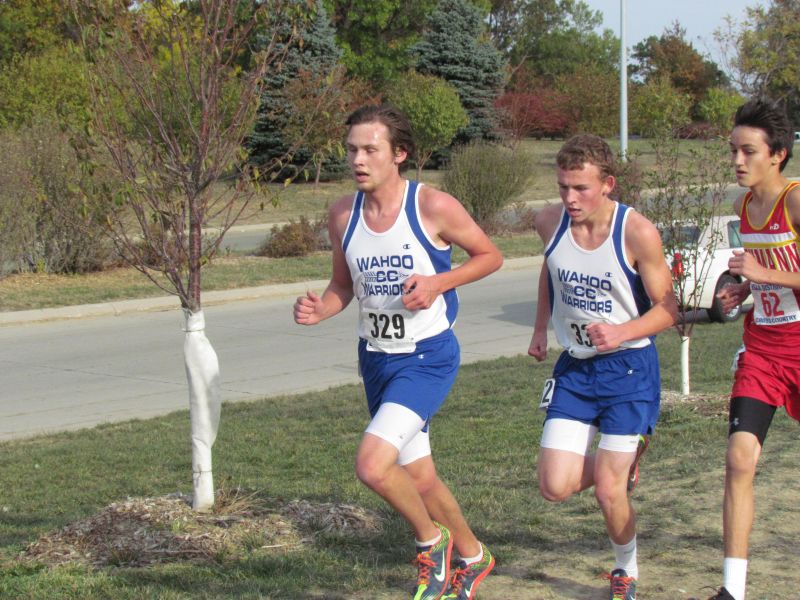 The boys' team placed 5th overall, and was led by individual state qualifier Zack Gropp with his 13th place finish. Thomas McAtee also will be making the trip out to Kearney by running for the 15th spot. Travis Burkey crossed the finish line next in 19:13 for 20th place, and Derek Hamar followed just behind, finishing 21st in 19:15. Dalton Lamprecht completed his season by running a personal best of 20:00 for 31st place, and Alex Talbott completed the Warrior scorers, running 21:28 for 46th place.

"These boys ran well today. It just wasn't quite enough to make it as a team. Overall, they had a good season," replied Curran.

The course proved to be quite demanding, but the Harriers were up to the challenge. The girls' team finished 3rd in the team race, and were led by junior Ronnie Brust. Brust finished 3rd, overall, with a time of 16:17 for the 4000-meter course.

The boys' team finished 6th, overall, and was led by senior Derek Hamar, who finished 20th with a time of 19:16. Less than a second behind Hamar was Thomas McAtee who ran 19:17, for a 21st place finish. Travis Burkey was next in 19:35 for the 24th spot. Dalton Lamprecht was the 4th harrier to cross the line, running 20:25 for 32nd place. Cole Talbert (38) and Alex Talbott (39) completed the Warrior varsity squad.

"This course was a difficult one, but I believe this meet was a wake-up call to the tough competition we will face at next week's district meet," commented Coach Karla Curran.

The Warriors head to Boys Town for the C-1 district cross country meet on Thursday, October 11. The first race begins at 4:00.

Another beautiful day greeted the Wahoo Harriers on Thursday, September 27, when they traveled to Pioneers Park in Lincoln for the Lincoln Lutheran Invitational.

The ladies began the day off right with their 2nd place team finish. Three Warriors finished in the top 15, and Ronnie Brust took home the first place medal, winning the meet in 16:32!

Tschida Johnson continued her medal-winning performances by placing 5th with a time of 17:29. Joelle Anderson was the next harrier to finish, running in the 15th spot in 18:53. Rachel Hrdlicka completed the scorers for the Warriors, running 22:43 for 37th place.

The boys placed 3rd in the team standings and were led by sophomore Lucas McAtee, who finished 8th with a personal best time of 18:42. Next for the Warriors was Zack Gropp, running 19:27 for a 16th place finish. Derek Hamar and Travis Burkey completed the varsity scorers, running in 21st and 25th place, respectively. Dalton Lamprecht was the fifth Harrier to cross the finish line, setting a new personal best of 20:28 for the 5000-meter course, while Alex Talbott rounded out the varsity squad with his 37th place finish.

"We still have a ways to go to meet our season's goals," commented Coach Karla Curran, "but I am confident these kids will get the job done."

A beautiful day greeted the Wahoo Harriers this past week when they traveled to the North Bend Central Cross Country Invitational on September 20, 2012.

Both teams fared well at the large meet. The girls' team started the day off right with their second place finish in the large school division. Three Warriors received medals. Ronnie Brust once again led the way with her second place performance of 15:57. Next for the Warriors was Tschida Johnson, who placed seventh in 17:09, and Joelle Anderson completed the 4000-meter course in 18:07, earning her 12th place. Rachel Hrdlicka was the last Wahoo Harrier to run, and she set a new personal best, running 22:11 for 18th place.

The boys' team continued to improve with their third place finish, and was led by senior Zack Gropp, who ran 18:35 for ninth place. Travis Burkey was next for the Warriors, setting a new personal best of 18:39, for 11th place. Right on his heels was Thomas McAtee running 18:44 for 12th place, and just inches behind was Derek Hamar in 18:45 for 13th place. Alex Talbott completed the varsity squad, running a personal best in 20:27, good enough for 20th place. Cole Talbert, Collin Nadrchal, and Patrick Hancock also competed well for the Warriors, all with their best times of the season.

"I was so thankful to have such a nice day and great course to run on," commented Coach Karla Curran. "I knew the kids were ready to run some fast times, given the right circumstances, and that happened, today!"

The Wahoo Harriers traveled north this past week when they competed in the Scotus Invitational on September 13, held at the Lutjelusche course just northeast of Columbus.

The course proved to be challenging, but both teams came away with some well-deserved hardware.

The girls' squad was once again led by junior Ronnie Brust, who placed seventh in 16:55. Tschida Johnson was the next scorer for the Warriors. Johnson ran her best time of the season in 18:00, which earned her 23rd place.

The girls' final scorers were Joelle Anderson who placed 46th and Rachel Hrdlicka who ran in the 90th position. The girls' team ran without their number three girl, Lindsey Hartshorn, who was absent from the meet.

"Not having Lindsey really hurt our team score, but I am proud of the four girls who pushed through the adversity to do their best," reported Coach Karla Curran.

Next for the Warriors was Travis Burkey in 26th place, followed closely by Thomas McAtee, who ran 19:31 for 32nd place. Completing the varsity squad was Dalton Lamprecht and Alex Talbott, who both ran personal bests of 20:39 and 21:09, respectively. Shane Nixon (110), Collin Nadrchal (117), Cole Talbert (119), and Patrick Hancock (145) rounded out the final Wahoo runners.

The boys' team finished in a respectable 4th place out of 13 teams.

"I was very pleased with our team score. The boys are working hard in practice, and it really shows in these bigger meets," commented Coach Karla Curran.

Next up for the Warriors is the North Bend Invitational on Thursday, September 20. The first race is set to begin at 4:30 p.m

The Wahoo Harriers were back in action this past week when they competed in their own W-Club Invitational on Thursday, September 6.

Over 400 runners converged onto the course to take part in the events. The Wahoo girls' team earned a third place finish, and were once again led by junior Ronnie Brust. Brust placed fourth against an extremely difficult field.

Tschida Johnson came away with some well-deserved hardware, running 18:24 for a 12th place finish. Next was Lindsey Hartshorn with the 27th spot, and completing the scorers was Joelle Anderson placing 36th. Rachel Hrdlicka also ran for the Warriors, running 24:01 for the 4000 meter course.

The gentlemen placed 7th out of 13 teams, having only one Class C team finish in front of them.

Next for the Warriors was Thomas McAtee running 20:02 for 32nd place. The fourth and final scorer was Travis Burkey running 20:18 for 41st place. Dalton Lamprecht and Alex Talbott completed the varsity squad, running 57th and 62nd, respectively.

"Overall, I was pleased with our effort," commented Coach Karla Curran. "We fared well against some very good Class B teams."

The Warriors' next contest is Thursday, September 13, 2012, when they travel to Columbus for the Scotus Invitational. The first race is set to begin at 4:30 p.m.

The Wahoo Cross Country teams traveled to Schuyler on Thursday, August 30, to compete in their first meet of the 2012 season.

It proved to be a challenge on the extremely hot and windy day, but both teams competed very well.

The girls' team was led by junior Ronnie Brust, who came away from the meet with a first place finish! Brust ran the 4000 meter course in a time of 17:32.

The gentlemen had a great day as well, finishing 2nd in the team standings. Derek Hamar led the way for the boys' squad, finishing the 5000 meter course in 19:51, with a 6th place finish.

Next was Thomas McAtee running in 8th place with a time of 20:11, and not far behind was Zack Gropp who ran 20:20 for 9th place. Travis Burkey rounded out the team score with a 19th place finish in 21:33. Senior Alex Talbott and sophomore Dalton Lamprecht completed the varsity squad running in 30th and 31st place, respectively. Also running for the Warriors were Shane Nixon placing 52nd and Patrick Hancock placing 60th.

"Overall, it was a very good day," commented Coach Karla Curran. "The kids came away with some hardware, which is a testament to their hard work. I couldn't be more proud!" 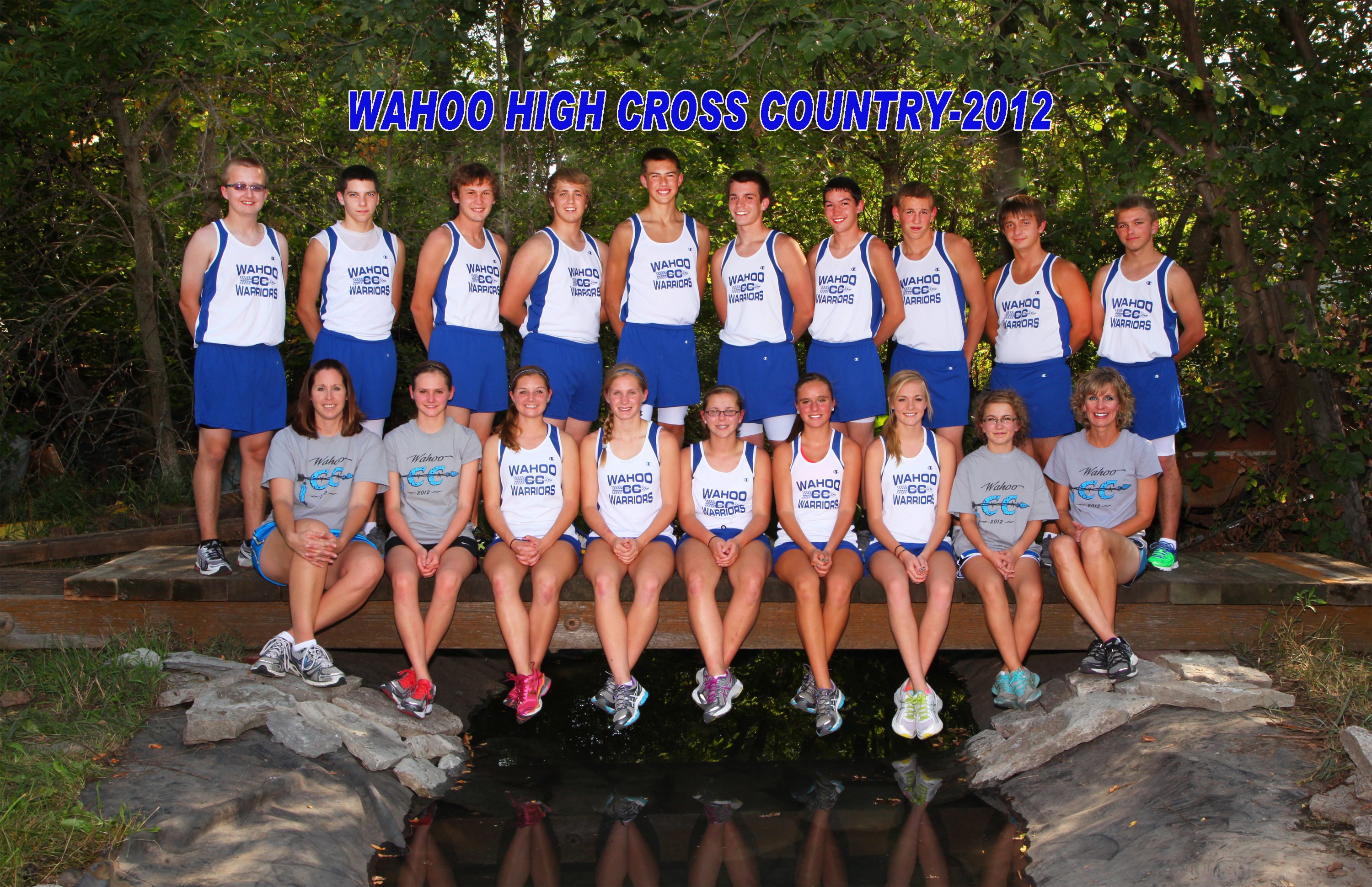 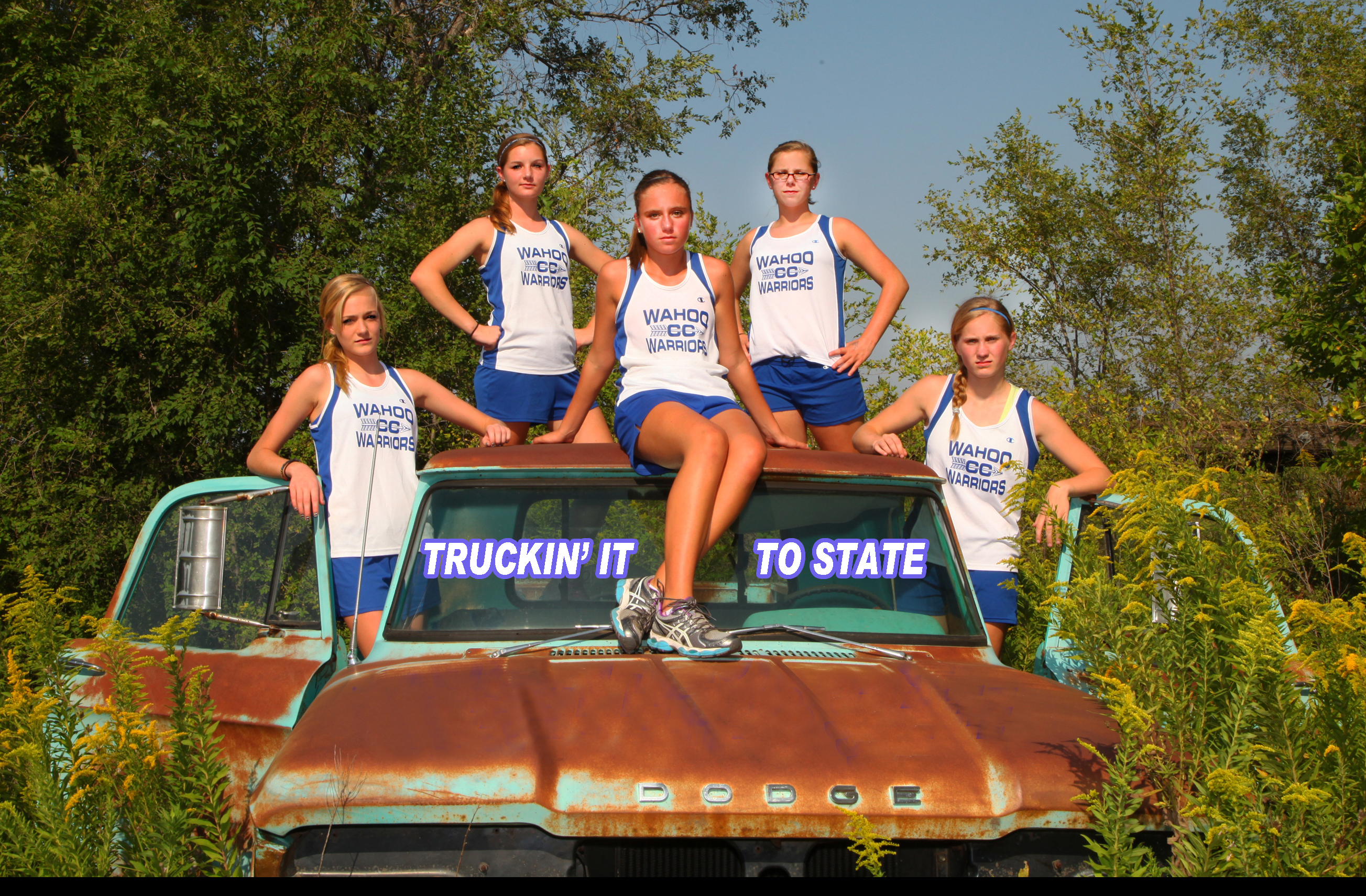 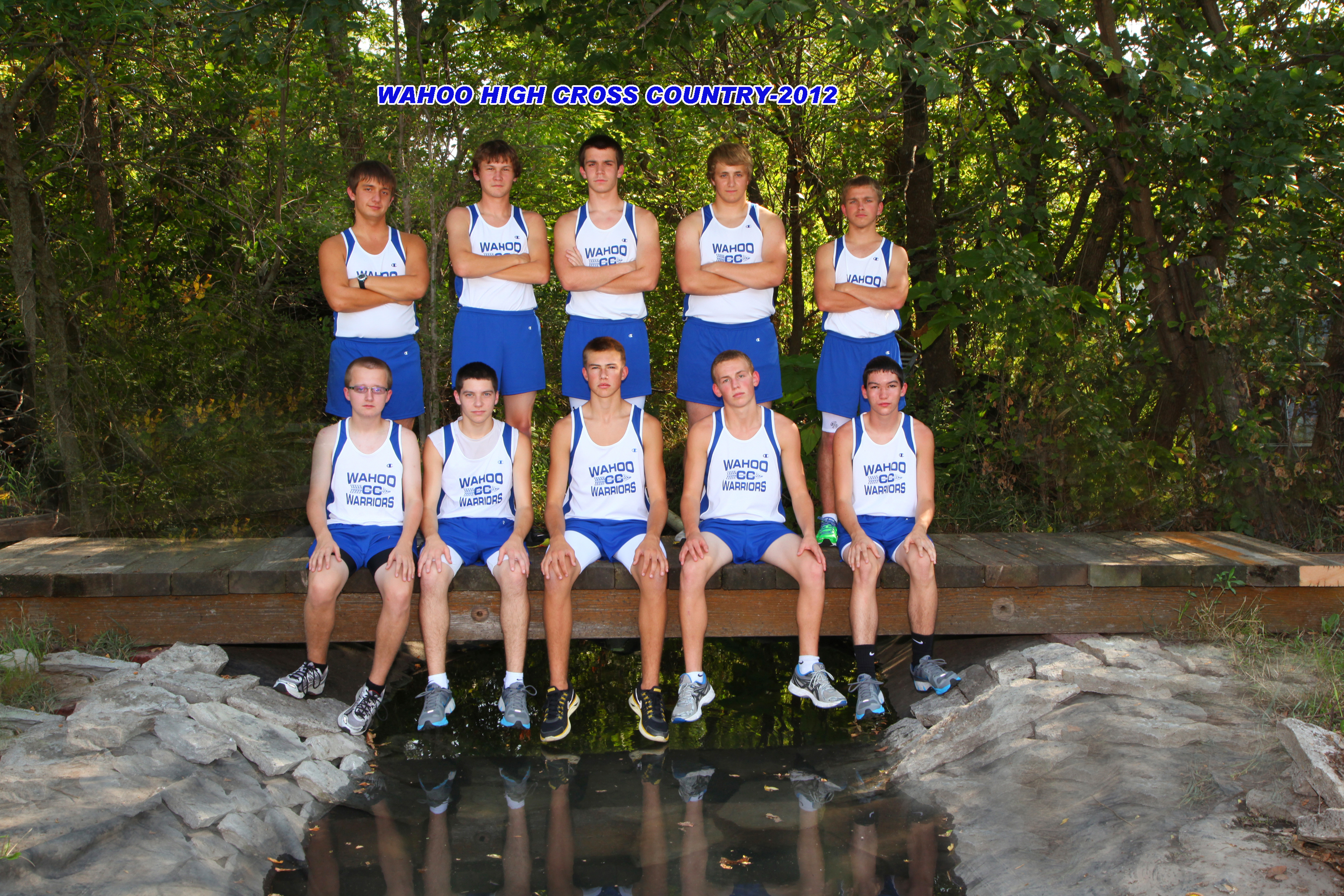