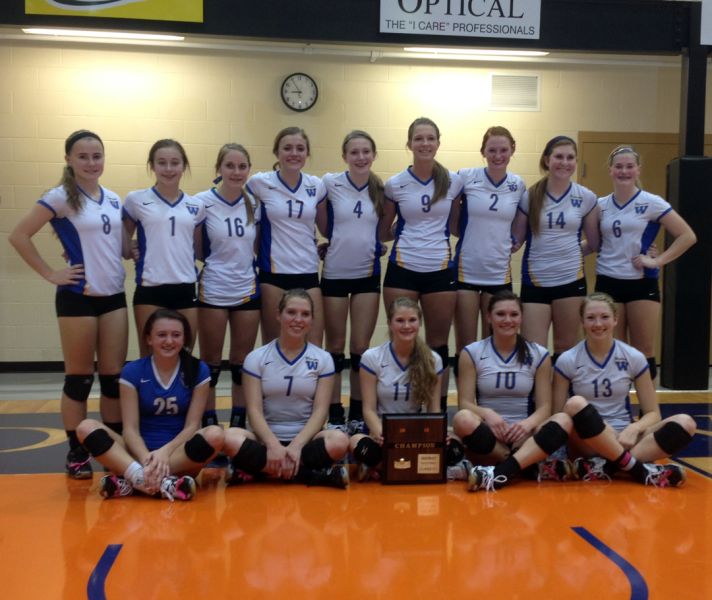 For the first time in school history, Warrior Volleyball has won its district championship, and will debut in the 2013 State Volleyball Tournament in Grand Island!

The Wahoo Lady Warriors ended their 2013 volleyball season with a first-ever trip to state and a 28-4 record.

“We are very proud of how well the girls competed at State,” said Head Volleyball Coach Trish Larson. “They didn’t back down to the competition and the game really could have gone either way. “

“We were blessed with a very balanced attack with five hitters over 100 kills,” Larson added.

The Warriors were led by junior middle blocker Katie Reeves with 277 kills. Junior Gabby Shannon had an impressive 251 and senior Jessica Krecklow added 242. Sophomores Taylor Homes and Lauren Crockett were also a threat at the net with 168 and 131 kills, respectively.

Setter Laura Barry led the team with 905 assists for the year, a new school record.

“Laura is one of the best setters in C-1 and did an outstanding job this year distributing the ball to our attackers,“ commented Larson.

“The seniors have provided outstanding leadership and we couldn’t have gotten to State without their hard work and dedication they have put into the program,” said Larson. “We have big shoes to fill next year.”

STATE TOURNAMENT: For the first time in school history, the Warrior Volleyball Team qualified for the 2013 State Tournament, played Nov. 14-16 in Grand Island!

Wahoo Warriors finished its 2013 with a record-breaking 28-4 season.

CONGRATULATIONS WARRIORS ON AN AWESOME SEASON!!!

(11/13/13) Things have been looking up for the athletics programs at Wahoo High and Howells-Dodge.

Both schools have powerhouse football teams, had undefeated state championship boys basketball teams and possess other state-qualifying squads. On Thursday, both schools will be a part of state volleyball in Grand Island and both coaches are optimistic about their chances.

“It’s been pretty amazing this year,” Larson said. “It’s taken a few years and some really hard work to get to this point. This tournament is going to be tough … all of our girls have had a big part in our success. We’re so balanced that we have people capable of stepping up if anyone has an off night and that’s a strength of ours.”

Wahoo’s only hiccups this year came against other strong programs Omaha Concordia, Douglas County West and Syracuse (C-1’s No. 8 seed) and the Lady Warriors have wins over all three. Middle blocker Katie Reeves and outside hitter Gabby Shannon have led a consistently strong attack that fared well in the rigorous Capitol Conference.

With the season on the line against Concordia in their district final last week, Wahoo rallied to take the fifth set to reach Grand Island. Larson hopes her team will be able to fire at all cylinders throughout each match and hopefully avoid such stressful scenarios.

“We need to be able to pass and serve consistently to run our offense well,” Larson said. “We’ve had some close matches along the way and what our team has done well is in showing heart. When we’ve been down, we’ve come back multiple times to win. They’re fighters.”

Drawn in on their side of the bracket is top-ranked Columbus Scotus, who has just one loss against Class C competition all year. Wahoo would face either the Shamrocks or a rematch with Syracuse – who ended its run in the Capitol Conference Tournament – in the semifinal, with No. 2 seed Ogallala the favorite on the other side of the bracket.

Things are just as wide open in Class D-1 where, despite losing all but one starter from last season, Howells-Dodge (23-8) will be heading to Grand Island Central Catholic at 8:30 p.m. to face Axtell (22-9) as the No. 3 seed.

“We did have some losses but the girls we have worked hard every day to get better and better,” VanLengen said. “Our setter, Amanda Evert, provided great leadership in getting our girls to play at a high level. We have some freshmen playing and some other girls who didn’t have a lot of previous varsity experience that were ready to step up this year.”

A pair of rough opponents in Bruning-Davenport/Shickley (28-3) and O’Neill St. Mary’s (30-1) could await the Jaguars if they advance past Axtell. VanLengen isn’t concerned with the fact his team has yet to face any of the teams in state. To him, facing bigger schools pretty much every night has been preparation enough.

“Our conference is mostly C schools and that really helped prepare us for whatever we’re going to see,” VanLengen said. “Whatever teams throw at us I don’t think it will be anything more than we’ve already seen this year.”

(11/6/13) PAPILLION – With her team’s season on the line, Wahoo High School junior middle blocker Katie Reeves took up the call.

After battling to a two-set lead over a talented Douglas County West squad, the Lady Warriors needed one last set win to claim the C1-4 subdistrict championship at Papillion-La Vista South. Reeves took over the match notching three kills and an ace in the middle of the set and going on a four-point service run to give her team an 18-10 lead.

DC West didn’t give up, with star Rachel Wald and company scoring eight of the next nine points to get back into the match. Reeves continued her run with two more kills (including the final one) and Wahoo celebrated a 25-22, 25-18, 25-20 sweep of the Falcons.

“She definitely loves to compete and works really hard to get the kill,” Wahoo coach Trisha Larson said. “Katie was definitely our go-to player tonight. Getting this win has really given us a lot of confidence going into a tough (district final).”

Despite a 26-3 record entering the match, Wahoo almost certainly had to beat the Falcons to have a shot at reaching state. Set one was tightly contested throughout, with a late Wahoo run overcoming a 20-19 DC West advantage.

The Falcons were no pushovers, having split a pair of matches with Wahoo over the regular season. But a stifling Warrior defense and a below-average passing night prevented DCW from getting Wald her usual number of touches and the team in general from getting easy looks.

Wahoo’s serving was effective as well, with libero Bailey Brigham (three of her team's 10, 11 points) leading a team effort that kept the Falcons from easily getting in system. Set two began just as hard-fought as the previous one had with the two teams splitting the first 26 points.

Afterward, something seemed to change with the Falcons, as Wahoo went on service run after service run to close out the set and take a commanding lead in the next. The Warriors swept Ashland-Greenwood in the semifinals Monday night while DC West needed five sets to down Wahoo Neumann.  Falcons coach Bob Wald said fatigue from Monday played its part. Reeves agreed and gave a rare thank you to the rival Cavaliers.

“DC West is a great team but we just served them aggressively and picked up their blocks and I think that frustrated them,” Reeves said. “Neumann taking them to five helped us a lot.”

DC West’s season ended with the defeat. Coach Wald took pride in his team’s 25-9 record this year and noted that the senior class that included his daughter Rachel won 80 games over four years after a two-win Falcon campaign when the class was in eighth grade.

“All the credit to Wahoo but we struggled passing the ball tonight,” Bob Wald said. “I thought playing five sets last night fatigued us a bit and (Wahoo is) a phenomenal team. This group of seniors had a great run over the past four years and this program owes a lot to them.”

Wahoo advances to district final C1-2 and will face 21-10 Omaha Concordia Friday night. While the Warriors have a shot at a wild-card if every other favorite wins Friday, Reeves said the team has no intention of letting its shot at a state championship be decided by power points.

“We’re going to have to work really hard to limit their tall outside,” Reeves said. “I’m just praying to win them all, we don’t want to base our season on luck or power points.”

Warriors post another straight-set victory at Ashland-Greenwood
Away (September 24, 2013)

Finish: CHAMPIONS (out of 6 teams)

Wahoo sweeps Arlington on the road
Away (September 17, 2013)

Wahoo takes down Raymond Central in straight sets in season opener
Away (September 5, 2013)

by Laura Barry
The Lady Warriors kicked off their season playing Raymond Central. The Warriors showed no fear by smashing the first ball to the ground! Wahoo took the first set, 25-13. Racing to another 25, the Warriors took their serves to them. Jessica Krecklow and Katie Reeves led the team with two aces apiece, helping the Warriors take the second set 25-16. In the third, Lauren Crockett came up with a crowd-roaring hit to get the team pumped up and help them finish the third set 25-17.

The Junior varsity and the C team also won, capping off a great night of Warrior Volleyball! 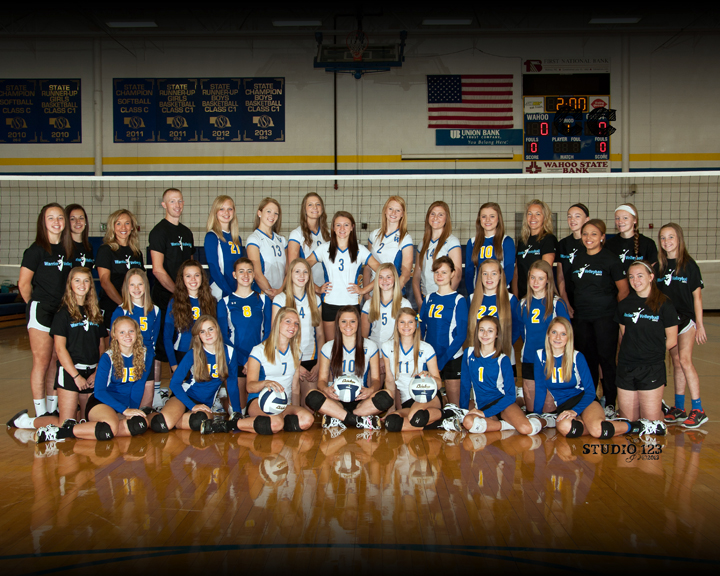 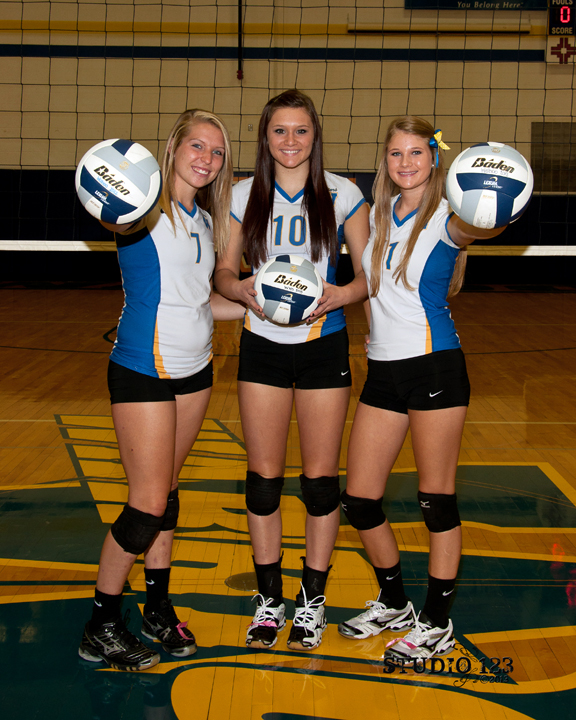