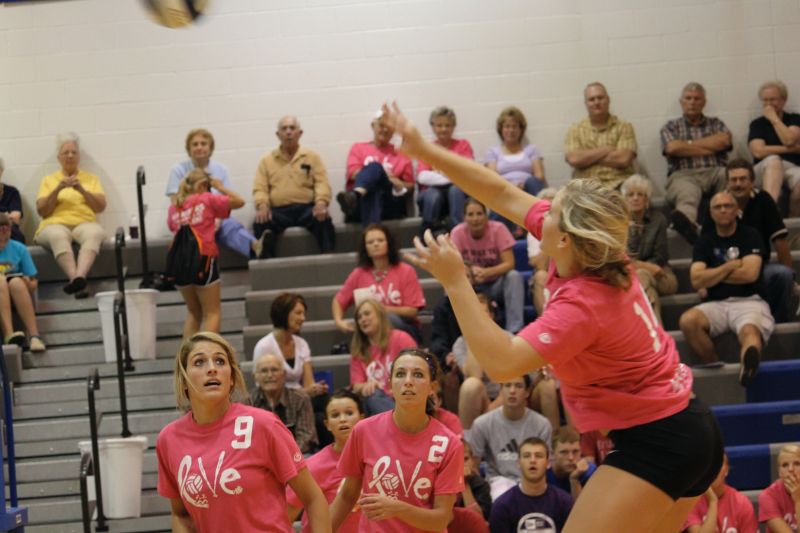 The Wahoo Lady Warriors ended their 2011 volleyball season with a respectable 21-11 record.

Photos from this competition are available by clicking HERE.

“We are very proud of the girls,” stated Wahoo Volleyball Co-Coach Trish Larson. “They never gave up and competed to the very end.”

A balanced hitting attack from the entire starting lineup was a key factor to the success of this team.

“We were fortunate to have six outstanding hitters,” Larson added. “Each player contributed to the team’s success.”

Setters Jordan Coffey and Laura Barry led the team in assists with 448 and 351 for the year.

“Our goal this season was to create a quick-tempo offense,” commented Larson. “The setters did an excellent job delivering the ball and giving our hitters one-on-one opportunities against the blockers.”

Junior Darcy Barry led the team in Service Aces with 56 while also totaling 368 digs and 188 kills for the year. Earlier in the season, Barry became the first Warrior to reach over 1000 career digs!

Junior outside hitter Samantha Grandgenett added another 229 digs and 110 kills for the year. Seniors Lois White and Jenna Johnson each had 151 and 110 digs throughout the season.

“The seniors provided outstanding leadership this year,” said Co-Head Coach Ann Egr. “There will be big shoes to fill next year.”

Wahoo defeated D.C. West Thursday night in 4 to advance to the semi finals of conference play.

Wahoo is part of Capitol Conference. Teams in this conference include ranked class B Bennington, 5th ranked Syracuse, 6th ranked Wahoo, C-1 Contenders Arlington and Ashland-Greenwood, along with Raymond Central and Ft. Calhoun.

"We have a great conference right now. To place 3rd in our conference isn't bad. Our goal was to be in the championship game on Saturday against Bennington. Unfortunately, Thursday's match was just too much both physically and mentally for the Warriors," stated Co-Head Coach Ann Egr.

"The tournament is set up that the netters had to play back-to-back Thursday evening, playing 8 sets of volleyball with a mere 16-minute break. That is exhausting. The girls gave it everything they had, and that is all a coach can ask for," added Co-Head Coach Trish Larson.

Wahoo went to D.C. West Saturday to take on the BlueJays. Wahoo went 4 sets with Ashland to capture third place.

The Warriors have this week off as they prepare for their final regular season game against Bennington on October 25. This is a home match starting at 5:00 p.m. Wahoo will host parents night that evening.

"We are very pleased and proud of the way the girls are performing. Things are beginning to click," commented Co-Head Coach Ann Egr.

Warriors start Capitol Conference play on Thursday, Oct. 13 in Syracuse. Wahoo will face D.C. West at 6:15 p.m. The winner of that match plays the winner of the Syracuse/Raymond Central match.

Warriors made a clean sweep last night, producing 3 W's for the C, JV, and Varsity teams at Centennial.

Wahoo advances to 18-8 on the season. Varsity held Centennial to under 13 points in all 3 sets.

The netters are gearing up to take on the Rockets of Syracuse on Tuesday, October 11 at Syracuse.

Conference play begins next Thursday, October 13, at 6:15 p.m. against D.C. West in Syracuse.

Please click HERE to view photos from this competition.

The Warriors, in their 2nd annual Pink-Out For Cancer, lost the first set 21-25.

"The netters came into the match with confidence. They really wanted to keep their momentum going our way," stated Co-Head Coach Ann Egr.

We had a clean sweep tonight: C team, JV and Varsity all beat the  Lincoln Lutheran Warriors!

Warriors came back to defeat Filmore Central (25-18, 25-23) in the Oct. 1 Ashland-Greenwood Tournament to earn the 3rd place finish.

"We are proud of the way the girls finished," stated Co-Head Coach Ann Egr. "We know how tired they were. It showed determination to come back strong against Filmore Central."

Wahoo will take on 7th-ranked Lincoln Lutheran Tuesday evening in a home match. This match will be a "Pink Out" as the Warriors raise money for cancer research.

Please click HERE to view photos from this tournament.

Warriors bounced back from Tuesday's disappointing loss against Arlington and Ashland, and took the championship at Saturday's David City Tournament!

Katelyn O'Brien and Jordan Coffey were named to the All-Tourney Team. 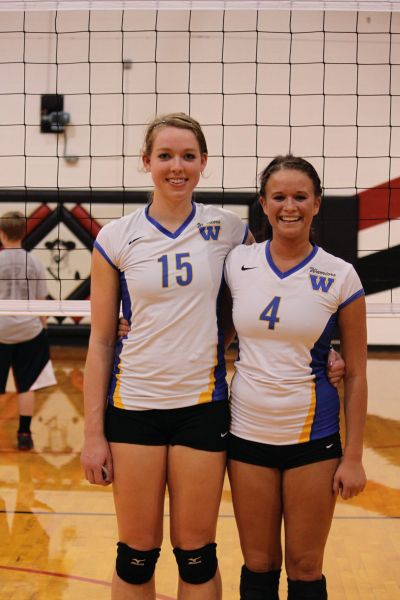 Launch the media gallery 2 player
Katelyn O'Brien and Jordan Coffey were named to the All-Tourney Team.
"Our goal was to re-energize and re-start. We knew we couldn't keep doing the same thing and expecting different results. We made some minor tweaks and the girls embraced them. They worked hard!" commented Co-Head Coach Ann Egr.

"Capturing the title in our last appearance at the tournament was important to the team, Egr added. "They were excited to face Yutan in the championship game. We lost to Yutan earlier in the season in a hard fought battle. Yutan is a solid team. This was a big victory for us."

The Warrior Volleyball team is getting ready for the September 24 David City Tournament.

After struggling against Arlington and Ashland on Tuesday evening, the netters are refocused and ready to roll. Over the weekend, the team finished 4th in a tough Seward tourney.

"The team looked great over the week; however, we just couldn't get a rhythm going Tuesday evening. Volleyball is a funny game. One minute you're up, and
then the momentum changes almost instantly. We just needed to keep it on our side," stated co-head coach Ann Egr.

"We know we need to have a tough mental out look. It's hard coming off a couple close matches. Those kind of games are both physically and mentally draining. We just couldn't put those last two W's in the book."  Coach Trish Larson added. "The girls are keyed up for this weekend".

The Warriors won this tournament for the past 2 years. The team wants to bring the hardware back home on Saturday. The Warriors face David City in the first round, 12:00 p.m. at David City High School.

Wahoo fell to Norfolk Catholic in a hard fought battle on home turf on Thursday, September 8.

Down 2-0, the Warriors battled back to win the 3rd set. The 4th set was a fight to the end. 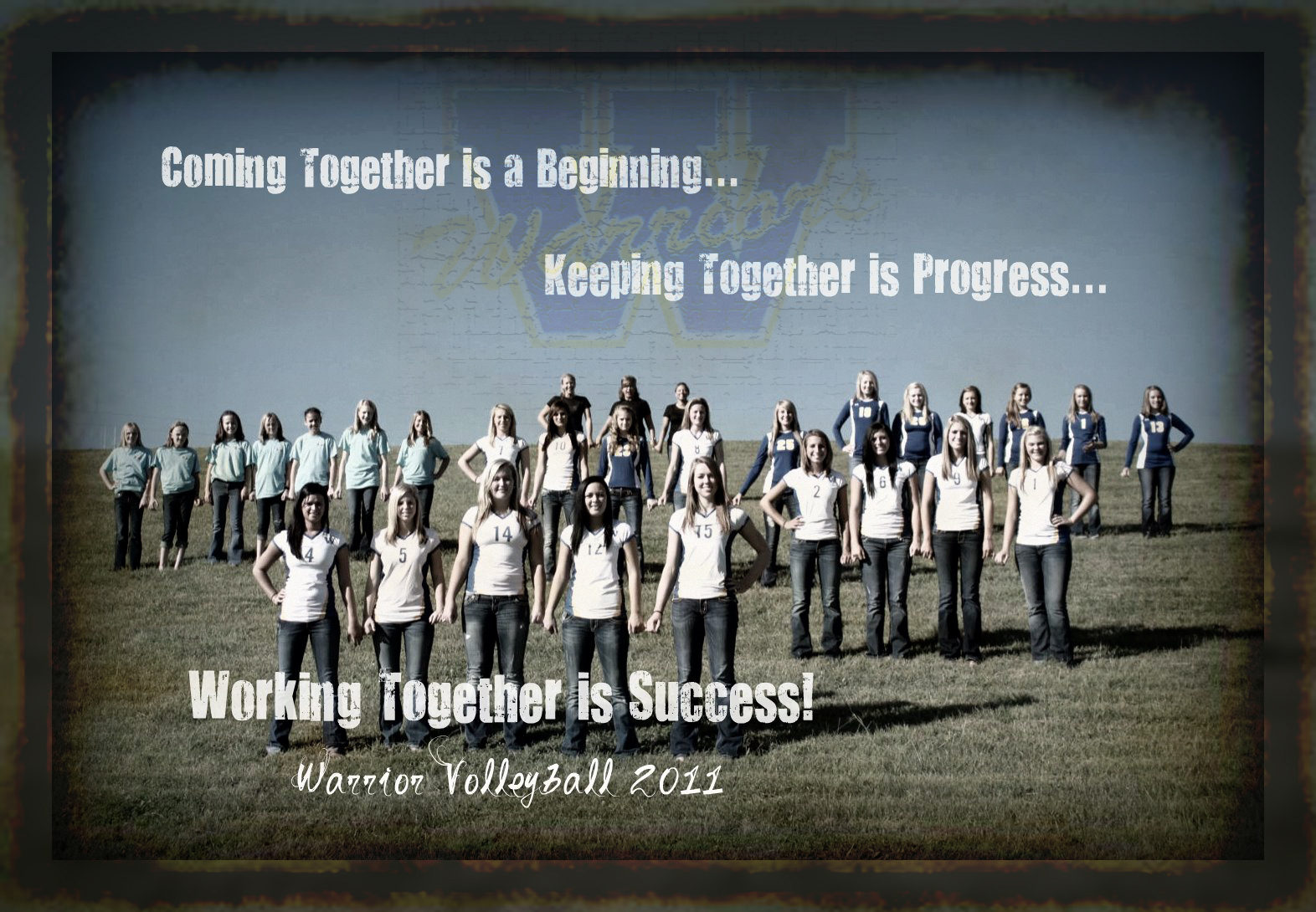