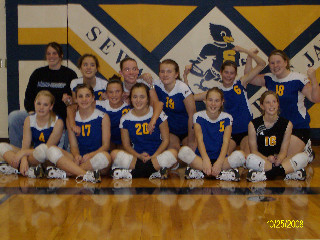 The girls faced tough competition from both the Class B Seward and York teams.

According to Coach Monica Smith, “The girls really stepped it up. All season we’ve come so close to capturing a title. It was great to see them doing so well against this caliber of teams. It was a great tournament.”

Stat leaders for the day were setter Jordan Coffey with 29 assists, middle blocker Katelyn O’Brien with 10 ace blocks and 15 kills, middle blocker Alison Brodahl with 13 kills, and outside hitter Hailey Sloup with 14 kills.

Wahoo volleyballers take to the road for their last regular season game on Tuesday, October 28. All three teams will face Bennington at Bennington. C-team begins the night at 5:00. Come cheer the Warriors to a victory!