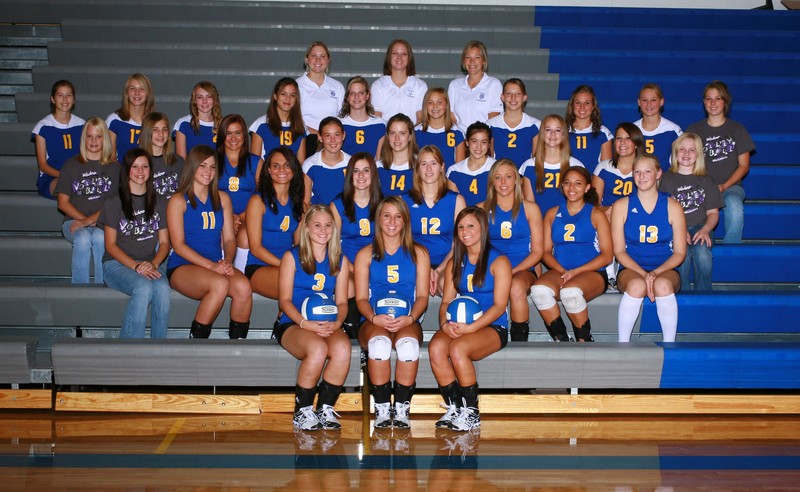 Wahoo vs. Omaha Bryan
To end the Logan View Tournament, Wahoo was up against the Class A school of Omaha Bryan and had another successful win. As a team the Warriors played well with a lot of focus and energy. Katie Sloup was the leader in kills during this game. Jenifer Proctor and Abbey Grandgenett combined had 20 digs during this match. Middle hitters Katie Miller and Ashley Sloup were very efficient in the front row during this tournament.

As a team the Wahoo Warriors had 95 digs during this tournament.

“This was a really good tournament for us. The girls were able to put together three solid matches for the day,” commented Head Coach Michelle Mahler.

The Warriors now stand at 7-2 on the season.

Wahoo vs. Yutan
The next game was against the Yutan Chieftans. The Warriors once again swept the Chieftains in two quick sets. The first set was 25-11 and the second was 25-17.

“I was impressed at how well they maintained their focus and how the whole team stepped up and made plays,” said Head Coach Michelle Mahler.

Wahoo vs. Logan View
The Warriors really stepped up their level of play on Saturday, September 15, following their rough match against the Chieftains that Thursday. For the first match of the day, Wahoo played Logan View and had a good win with both sets ending 25-14.

Leading the Warriors in ace serves were Taylor Kavan and Amber Henkel. Libero, Abbey Grandgenett had a great day with 15 digs against Logan View.

Wahoo vs. Yutan
On September 13, the Wahoo Warrior Volleyball Team competed against the Yutan Chieftains. It was a long lasting game with five whole sets of volleys.

“We came out and had an easier win the first set, then Yutan came back in the second and picked up their defense,” said Head Coach Michelle Mahler.

Amber Henkel had three ace serves and 28 assists during the game. Leading the Warriors in kills was Katie Sloup, followed by Ashley Sloup and Taylor Kavan. All three hitters combined for 28 kills.

Wahoo vs. Neligh-Oakdale
The Warriors finished out the tournament beating Neligh-Oakdale in two straight sets. Katie Sloup and Katie Miller led the team with four kills each. Taylor Kavan served 14/15 in that game and also had three aces.

“I thought we played our best match of the year so far against Bergan. We just couldn’t pull out the second set, and then came out flat to start the third,” said Head Coach Michelle Mahler.

Abbey Grandgenett had her best game of the season with 14 digs.

Wahoo vs. Neumann
The first match of the morning was against town rival Bishop Neumann, who served up the Warriors’ first loss of the season.

Amber Henkel handed out 13 assists to her hitters that game.

Katie Miller and Jenifer Proctor led the team with four kills each.

Wahoo vs. Raymond Central
The Warriors then finished off the night beating Raymond Central in two straight sets as well. They finished 25-16 in the first and 25-10 in the second.

“Jenifer Proctor served extremely well for us both games, serving 27/27 combined and scoring 22 points,” commented Head Coach Michelle Mahler. “Amber Henkel did a nice job of running the offense as we had all five hitters get at least one kill each game.”

After the first games of the season, the Warriors were idle for more than a week before their next games. Then they were headed to the St. Wenceslaus tournament on September 8.

Wahoo vs. Conestoga (Season Opener)
The Warriors started off their season strong winning the triangular at Raymond Central on September 30. In the first game vs. Conestoga, the Warriors came out strong beating them 25-13 in the first set and 25-17 in the second to start off the season with a 1-0 record.