Congratulations Warriors on taking the title at the Ashland-Greenwood Blue Jay Invite for the second straight year! 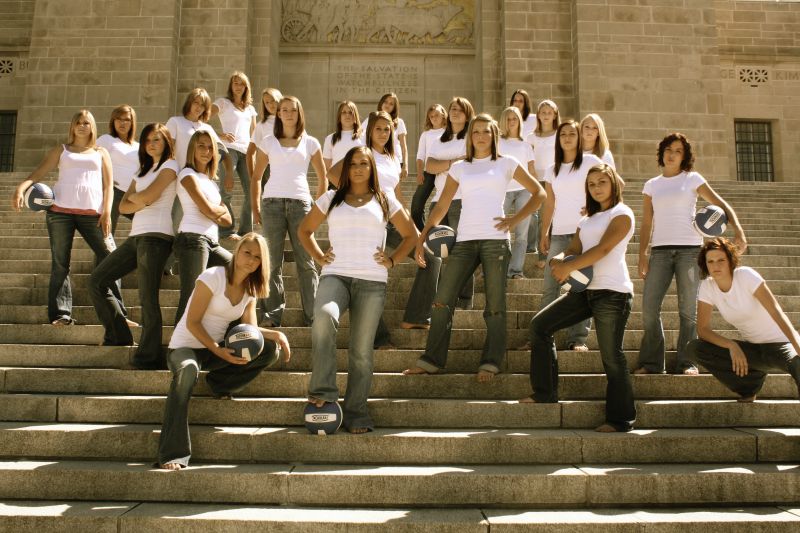 THE WARRIOR VOLLEYBALL TEAM PLAYED IN THE 2009 C1-5 VOLLEYBALL SUBDISTRICTS HELD AT MALCOLM ON MONDAY & TUESDAY, NOV. 2-3. THE #2-SEEDED WARRIORS BEAT #3 NORTH BEND CENTRAL ON MONDAY NIGHT. THE WARRIORS FACED #1 SEEDED NEUMANN ON TUESDAY NIGHT. WAHOO WON THE FIRST TWO SETS, BUT LOST THE NEXT THREE, PUTTING AN END TO THEIR 22-10 SEASON.

The Warriors finished third in the Conference tournament on October 17. The netters were 2-1 in the tournament improving their record to 21-8 for the year.

The first match of the night was against Ft. Calhoun. The Warriors were victorious 25-10, 25-12, 25-7. Emily Brodahl led in kills with 10 for the match; 5 came in the third set without errors hitting .470. Both Kylie Krecklow and Katelyn O’Brien hit at .333 for the match. Jr. outside hitter Kayla Bennett put down 6 of her own hitting at .278.

“Bennington is a strong, well balanced team. They did a great job of keeping the tempo of the game. We needed to execute our offense and that has to start with passing. We struggled with this aspect of our game,” stated Coach Trish Larson.

The netters have the week to regroup and refocus. “Our schedule has been long with few breaks,” stated Egr.

The girls look forward to a week of practice to get ready to face Bennington on Tuesday, September 27. “The team is ready to avenge the loss,” Larson added.

The Varsity Warriors will compete in the 2009 Capitol Conference Volleyball Tournament. The Warriors will play in Bennington on Thursday, October 15, and hopefully advance to the Finals in Ashland-Greenwood on Saturday, October 17. Please click HERE to view the tournament bracket.

Warriors on a roll with 5th Straight Win!
Improve to 19-6

“We were a little concerned with the physical aspect of the game. The girls were tired and their bodies need a break. Several were seeing some minor muscle strains and flu like symptoms but they battled through it,” commented Co-Head Coaches Ann Egr and Trish Larson.

They saw 13 aces from the service line. Liane White put her mark in the book with 4 and Annie Divis held her own with 3.

The team had 27 kills for the night. Both junior outside hitters Kayla Bennett and Kylie Krecklow put their name of 8 each. Katelyn O’Brien pounded out 5, Emily Brodahl with 4, and Alison Brodahl had 2. Junior setter Mahala Egr earned 27 assists.

“Blocking has been a focus and it showed tonight,” added Larson.

The girls put up 11 team blocks. Middle blocker O’Brien was key in those numbers. She blocked 4 with teammates Brodahl and Bennett getting their hands on 3 apiece.

Defensively, we continue to improve. The Warriors had 58 digs with setter Egr and libero Darcy Barry both scooping up 15 hits, followed closely by with Bennett earning 14, and Krecklow and defensive specialist Annie Divis both earning 7.

“When the numbers are spread out like this it tells us that we are balanced defensively. Balance and consistency are huge in the emotional rollercoaster that volleyball can produce,” stated Egr.

“Consistency and solid team effort was the game plan going into the match,” stated Larson. That is exactly what they did. They defeated the Broncos in 3 straight sets: 25-23, 25-19, 25-19.

The first set of the night went back and forth until the Warriors ended up with a 22-17 lead. That cushion started to slip.

“Centennial was just out-defending us. They were doing a nice job of digging the ball up. We had to make defense and service passing a priority in order to run out offense,” commented Egr. “The girls never gave up. That fight is what makes this group so dynamic. They play with integrity.”

After taking a much-deserved break on Friday to cheer on the Wahoo Warrior District Champion softball team, the netters take to the road to play ranked Syracuse Rockets on Tuesday with C/JV games beginning at 5:00 p.m. Conference play begins Thursday. Wahoo will play the first round against Ft. Calhoun at 6:15 in Bennington.

The Wahoo Warrior Volleyball Team improved to 17-6 for the season after earning 4 wins at the Blue Jay Invite as they capture that title for the second straight year.

The Warriors went into tournament action on Saturday with a solid victory over Roncolli 25-15, 25-15.

“The girls allowed only one service error for the entire match,” commented Coach Ann Egr. “This was a goal of ours. We committed as a team to decreasing unforced errors. This was a great start!”

The next opponent was against Class B Plattsmouth Saturday afternoon with a 25-16 and 25-14 finish. The Warriors crushed the ball with 25 kills during that match.

According to Coach Trish Larson, “We were able to execute our tempo. Our passing keeps improving. That’s the key! This allows Mahala to move the ball around allowing all of our hitters the opportunity for kills.”

The Warriors came back in the championship match to defeat Ashland in two solid sets: 25-23, 25-21. The Warriors played the Blue Jays Thursday evening and handed them a loss after three well-fought sets.

“This was an exciting win for the girls. They set the bar high. We were extremely proud of the way they played. They continue to prove they are contenders,” Larson said.
Statistical highlights from the tournament.

The Warriors advance to 11-4 after the David City Tournament runner-up trophy. Junior outside hitter Kayla Bennett, along with junior setter Mahala Egr, both earned spots on the All Tournament team. 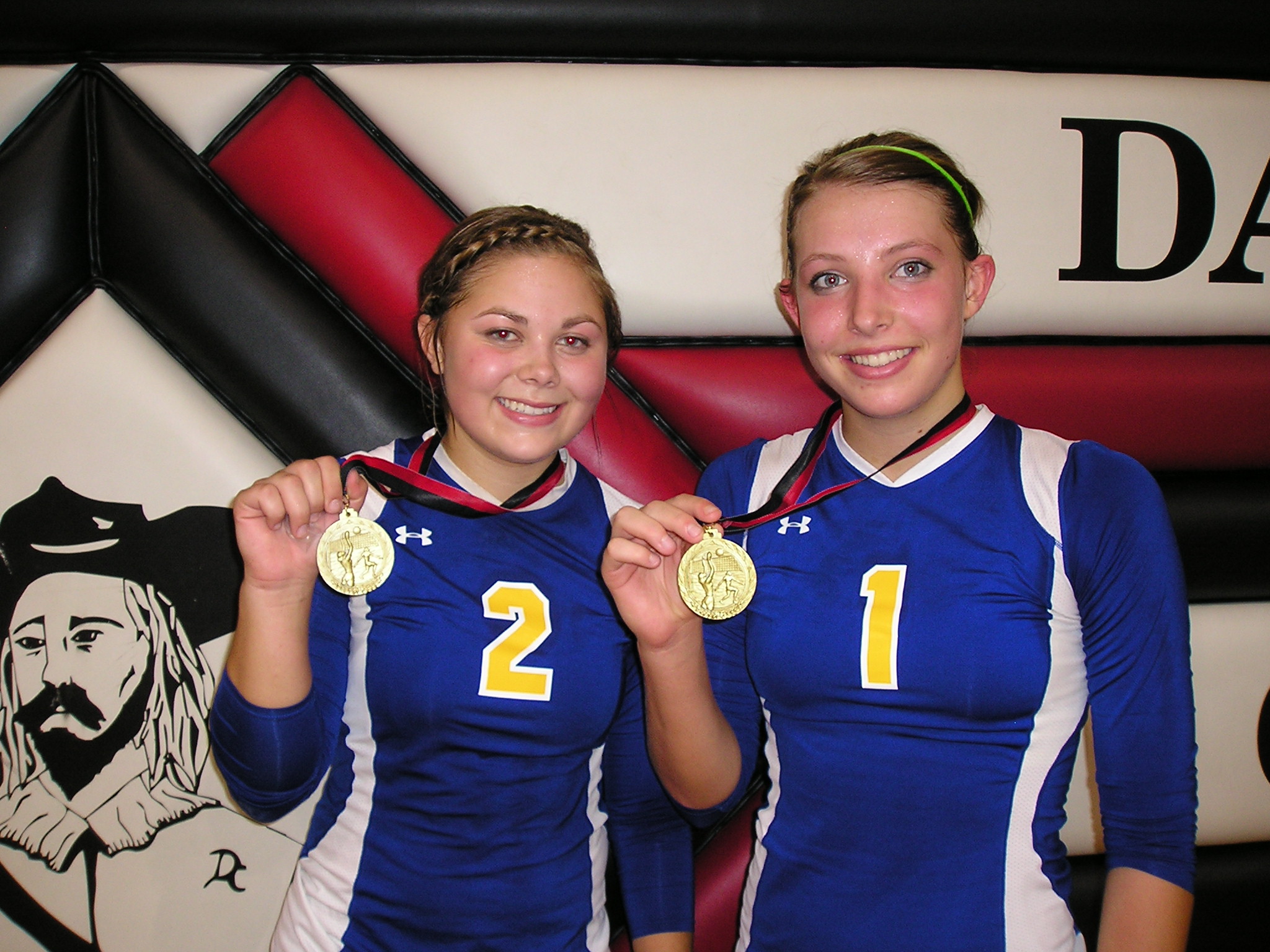 Wahoo started off the afternoon with a victory against a defensively sound David City 25-22, 25-20. The netters continued the winning streak with Twin Rivers, 25-18, 25-18.

According to Co-Head Coach Trisha Larson, “The girls started off slow but were able to pick things up and change the tempo.”

After a long wait to get back on the court, the Warriors battled back after a 9-25 loss to ranked Aquinas. The second set the Warriors beat the Monarchs 25-22.

“It was exciting to see the girls go out and play with such heart. We told them that they needed to go out and play like their volleyball,” commented co-head coach Ann Egr.

“The girls know they can play with ranked teams. Unfortunately, unforced errors limited the opportunity to play our tempo of volleyball. That can’t happen when playing high caliber teams,” added Larsen.

The Warriors hit the road this week with a triangular at DC West on Monday, September 28. The team stays at home on Tuesday to match up with Bishop Neumann. The Warriors end the week with the first round of the Blue Jay tournament on Thursday and the final round Saturday in Ashland.

Both Egr and Larson agreed that, “the Warriors are competitors. They’ve worked hard and will be ready to regroup and re-focus for the week. We’re hoping to have the fans here on Tuesday to get the girls fired up!”

Netters finished runner up at the St. Wenceslaus Tourney this past weekend. They lost early to Neumann in two sets 19-25, 18-25. Unforced errors were a key factor in the outcome of the game with the Cavaliers. 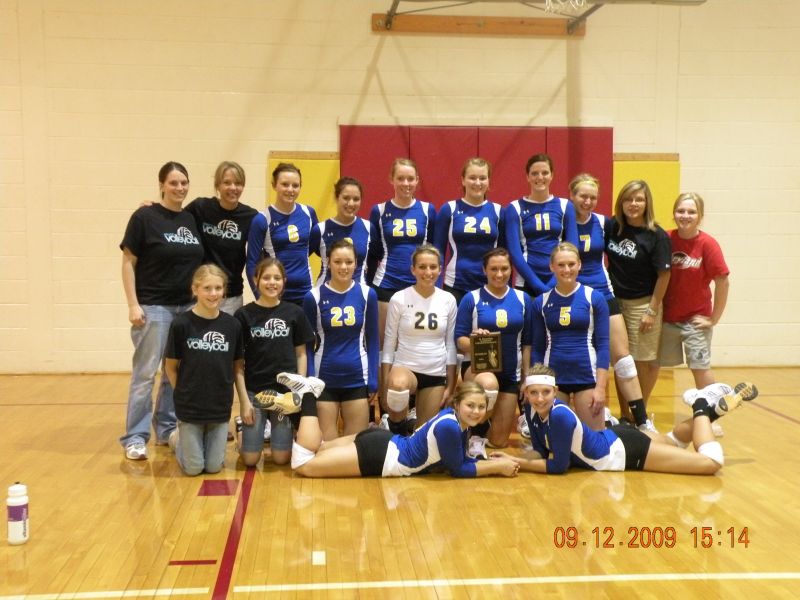 “When playing tough competition we have to keep unforced errors to a minimum. We can’t make those kinds of mistakes,” stated Coach Tricia Larson.

According to Head Coach Ann Egr, “The highlight of the tournament was in the second set of the Fremont Bergan game. We were down by 10 points. We called a time-out, and told the girls they needed to go out there and play for the love of the game. And for the love of the game they did! The girls showed how to play with heart…mentally tough. That was fun to see.”

Freshman libero Darcy Barry served for 10 points, which tightened the score 20-19. Pulling both their offense and defense together helped hammer in 9 kills to finish the set. The Warriors cashed in the third set 25-15.

The Warriors hit the road on Thursday to meet up with the Chieftains of Yutan. The “C” team game will start at 5:00.

The Warrior Volleyball team took home court advantage Thursday evening, September 3, hosting a triangular with Conestoga and Raymond Central. In the first match of the night, the Warriors defeated Conestoga 25-13, 25-20.

The Warriors added a new look to their offense as open spots were filled by juniors Kylie Krecklow, Kayla Bennett, Jessica Barry and Liane White; sophomores Alison Brodahl and Katelyn O’Brien, and filling the senior leader role was Annie Divis.

To top the night, the Warriors dominated Raymond Central in two matches, 25-10 and 25-8. The goal for the evening was to walk away playing only four matches.

Solid passing helped assure junior setter Mahala Egr was able to run the quick tempo offense. Middle Hitter Emily Brodahl led the attacks with 11 kills for the night. Both Krecklow and Bennett had 8 kills for the night with O’Brien holding down 5 of her own. Alison Brodahl and Jessica Barry shared some time on the right side, while senior Annie Divis and freshman Darcy Barry helped command the back row as defensive specialists.

The starting line-up last night was at middle blockers - Katelyn O’Brien and Emily Brodahl; right side hitter - Alison Brodahl; outside hitters - Kayla Bennett and Kylie Krecklow; setter - Mahala Egr. Assistant Coach Tricia Larson acknowledged that the team is fortunate to have a deep bench who can step onto the floor.

The Warriors’ next contest will be Thursday with a home contest against Norfolk Catholic. JV starts at 6:00 p.m. with the varsity to follow. On Saturday, September 12, the Warriors play in the St. Wenceslaus Invite in Wahoo. The netters play Neumann at 9:00 a.m., Neligh-Oakdale at 11:00 a.m., and the third match against Fremont Bergan at 2:30 p.m. The JV travels to Arlington. Go Warriors!