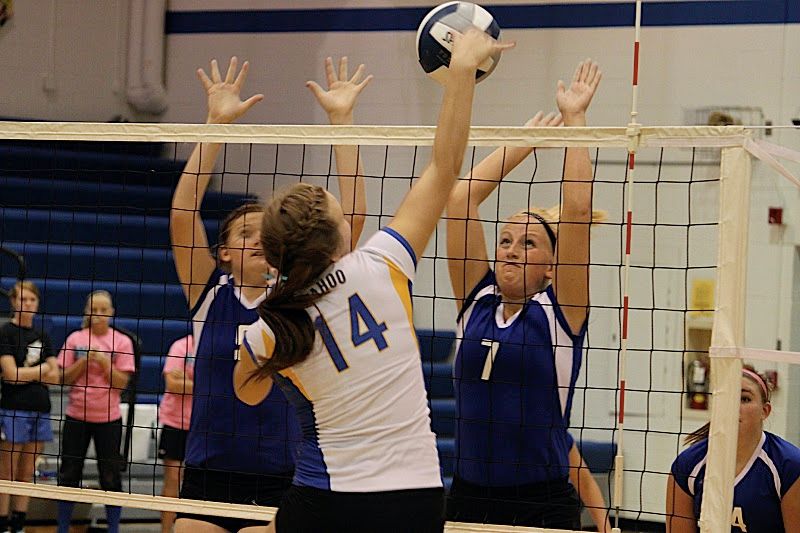 Coach's comments and statistics will be posted soon . . .

Wahoo may have fallen short of the victory this evening, but it didn't go without a gallant effort.

Wahoo took the Bennington Badgers to five sets. Wahoo lost the first two 24-26 and 16-25, but came back swinging to sweep the next two 25-19 and 25-21. The two ranked teams battled for the fifth set. Wahoo came back from a two-point deficit late in the 5th.

"We trailed the Badgers 11-13 but the girls just didn't lose their focus. They played well but came up short in the end. We are extremely proud of the effort they showed,"  Stated Co-Head Coach Ann Egr.

"We just came off of a 10 day break," commented Co-Head Coach Trish Larson. "This concerned us. We were hoping the girls wouldn't be rusty from the break. They showed how to play with heart."

Wahoo lost the match 16-18. The Warriors had 50 kills for the evening with senior setter Mahala Egr putting up 35 assists.

"We had three hitters at 14 kills a piece. That says something for our offense tonight," stated Larson.

Senior hitters Kayla Bennet and Emily Brodahl, along with junior middle Katelyn O'Brien, were the ones who put those in the book.

Wahoo heads to Sub-District play at Fremont High on Monday November 1. They will play the third game at 7:30.

"We are looking forward to districts. The goal all season has been to make the trip to Grand Island. This trip would be the first in school history! The girls are working hard to fulfill this goal," Egr stated.

Wahoo took runner up in the Capital Conference tourney Saturday in Bennington.

"Bennington is a solid team. We hung with them but just couldn't produce the win," stated Co-Head Coach Ann Egr.

The 2010 Capitol Conference Volleyball Tournament will be held on Thursday, Oct. 14 and Saturday, Oct. 16 at both Wahoo and Bennington. The #1-Seeded Warriors will debut in Match #1 against Fort Calhoun on Thursday, Oct. 14 at Wahoo High School (5:00 p.m. start). Please click HERE to view the entire tournament bracket. GO WARRIORS!

Warrior Volleyball swept the first round of Conference, defeating Ft. Calhoun and Ashland in 3 straight sets. "Fearless" was the theme for the night and that is how they played! The girls didn't allow more than 17 points scored on them the entire evening. Come cheer the Warriors on to a Conference Victory Saturday at 2:15 in Bennington. 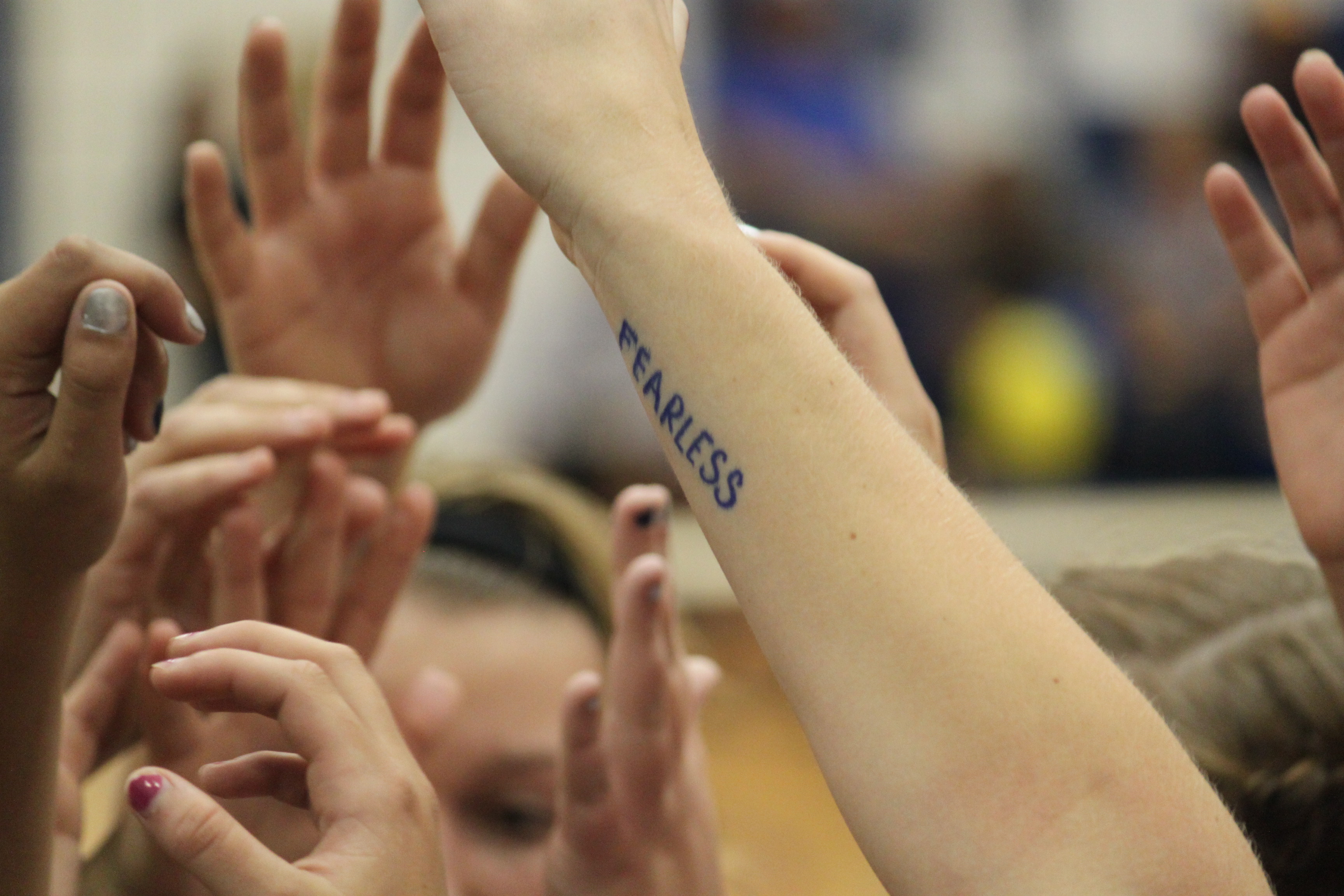 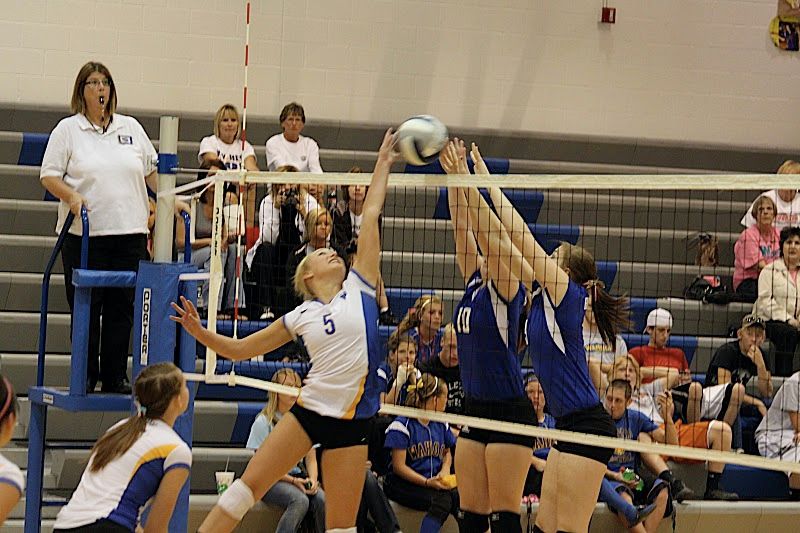 Please click HERE to view photos from this competition. 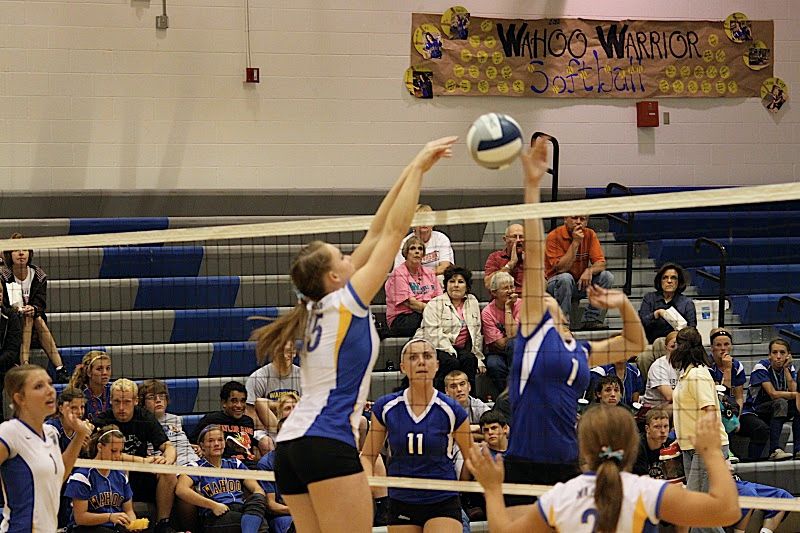 The netters dedicated this evening's game to benefit cancer research. They packed the gym in a sea of pink to honor those with cancer. Businesses in the surrounding towns donated items to be raffled off. At the end of the game, the players released remembrance balloons outside for those who have fought their battle with cancer.

After a disappointing loss to Fillmore Central at the BlueJay Invitational, Wahoo came back swinging.

"The girls were ready for this game. They knew they had to play tough to a solid Lutheran team," stated Co-Head Coach Ann Egr.

"We are proud of the overall effort. We talked yesterday at practice about playing tenacious defense and running our tempo offense. That is exactly what they did," added Co-Head Coach Trish Larson.

Warriors take to the road on Thursday for the first round of the BlueJay Invite. Wahoo will play Roncalli first round.

Warriors Advance to 16-1 after Home Triangular with Ft. Calhoun and D.C. West

Warriors advance to 14-1 after taking the title at the David City Tournament. Despite a slow start against Aquinas losing the first set 22-25, Wahoo regained composure and dominated the rest of the tournament.

"We got off to a slow start and couldn't get in a rhythm. The great thing about this group is their confidence and faith in each other. I knew they would rebound," stated Co-Head Coach Ann Egr.

To make it to the finals, Wahoo beat Twin Rivers 25-15, 25-11. The Warriors hammered out 24 kills against Twin Rivers, only giving up 4 errors at the net.

In the finals Wahoo handed North Bend two losses (25-15, 25-12) to capture the Championship Trophy. Senior setter Mahala Egr and outside hitter Kayla Bennett were chosen by the coaches to the All Tournament Team. 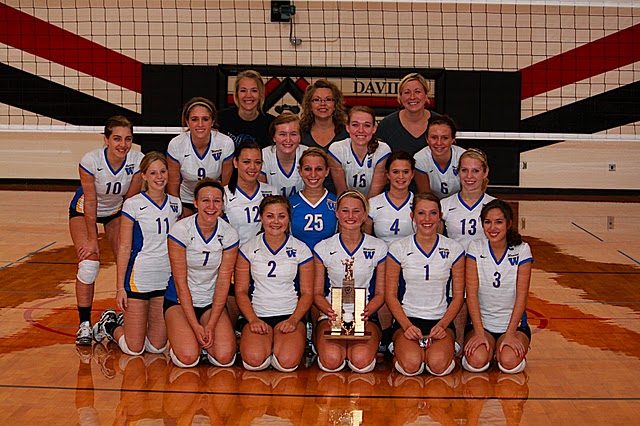 The Warriors defeated York in the first match of the day 25-16, 25-16 to advance to the semi finals where the faced the top-ranked Bennington Badgers.

“We quickly found ourselves in a 0-5 deficit. The girls battled through it and kept plugging away,” commented Co-Head Coach Ann Egr. “The girls had to fix their serve receive passing to start running the offense. Once we did this, we were able to gain some of the momentum."

Coach Trish Larson added, “It’s all about limiting our unforced errors. The girls were able to do this in the second set. They started out on top and never let them gain the lead.”

The Brodahl sisters had two huge blocks early in the 2nd set allowing the Warrior defense to take over.

The Warriors fell short in the 3rd set and were handed their first loss of the season.

“It’s always disappointing to lose, but to lose to a great team and play tough only makes us better,” added Larson and Egr. 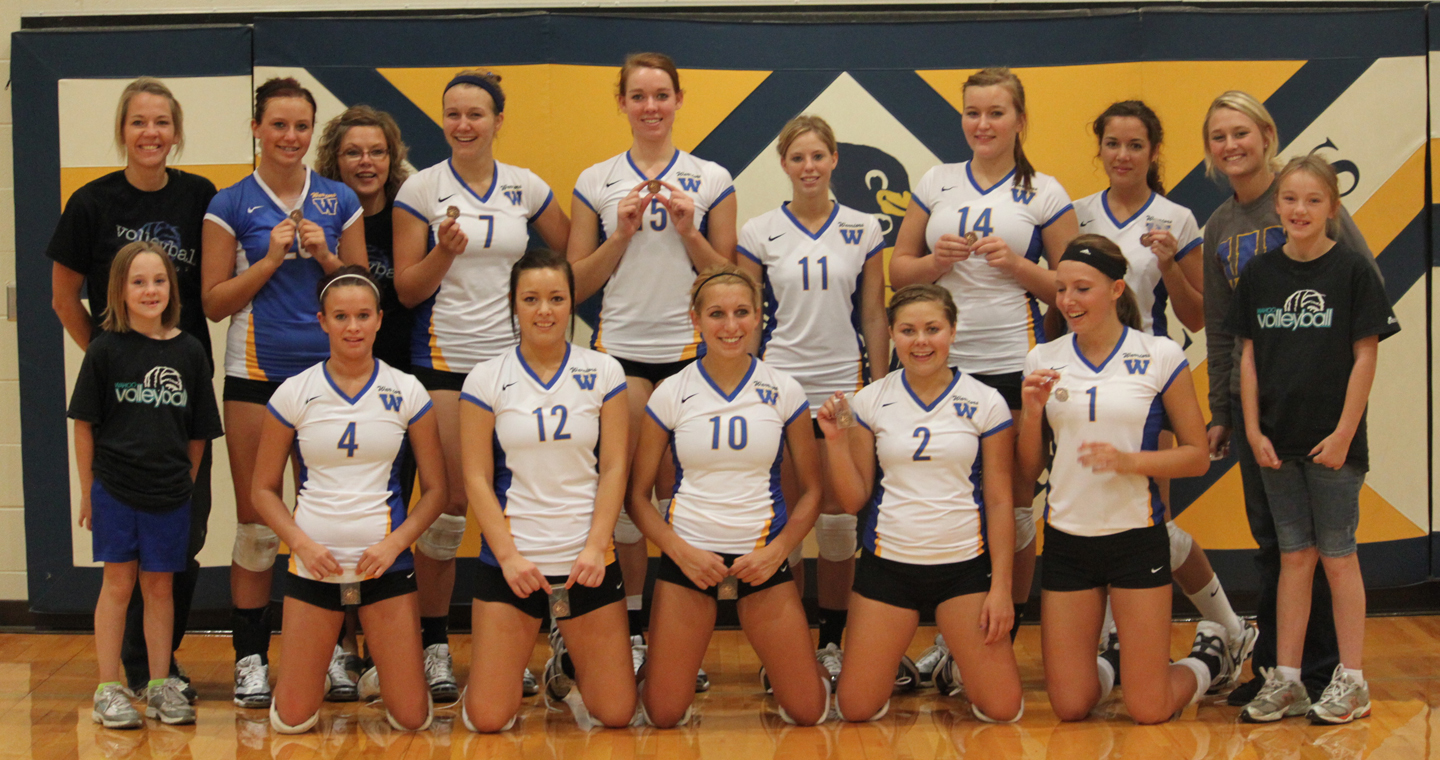 Warriors take to the road on Tuesday for a triangular with Arlington and Ashland-Greenwood at Ashland.

Please click HERE to view photos of the game.

Sam Grandgenett stepped in as libero adding 16 digs along with Barry's 13, Bennett's 13, and Egr's 11

Katelyn O'Brien and Darcy Barry both had 2 ace serves.

Warriors advance to 7-0, and hit the road Saturday for the "Wurst" Tourney in Seward. Wahoo faces York at 9:00 a.m.

The Warriors have not given up a set on this streak. A balanced offense, solid defense, and strong leaders seem to be the mix that is working for the netters.

95% serving as a team. Seniors Mahala Egr and Kayla Bennett lead in service aces with 3; followed closely by Kylie Krecklow with 2.

Blocks: The Brodahl sisters brought home 2 block assists, with Bennett and O'Brien each claiming one.

The Warriors are off this weekend. Next game the netters will face ranked C2 Yutan Chieftons in a home match on September 16. 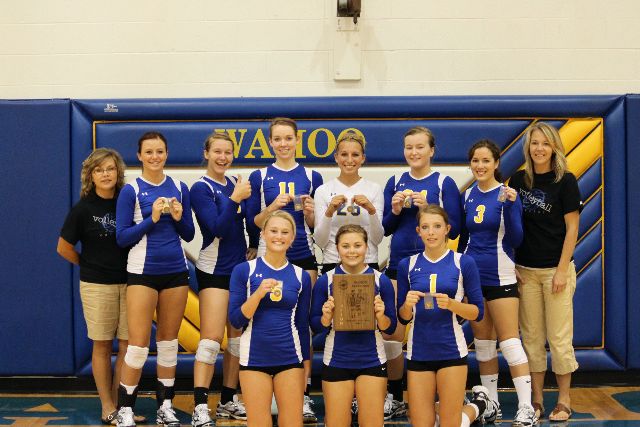 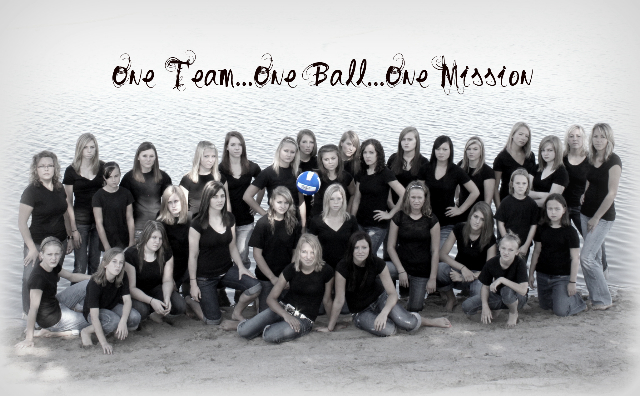 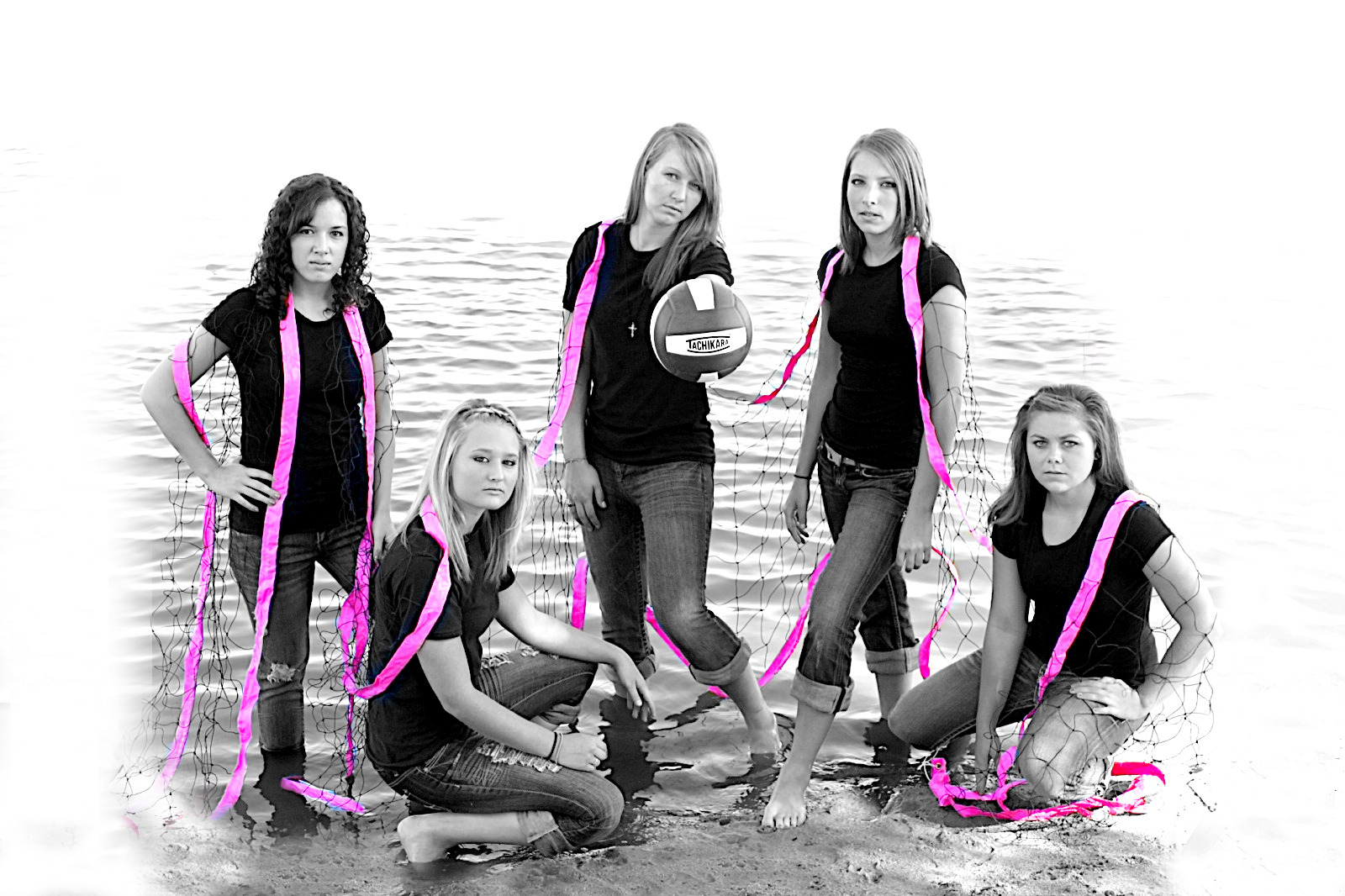