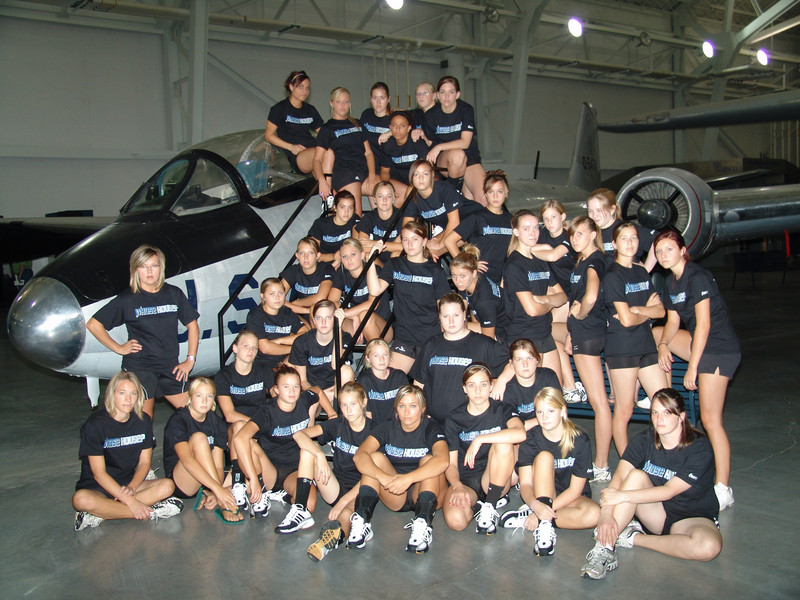 The Warriors finished fourth in the Conference tournament on October 18, 2008 in a loss to Bennington and Arlington during tournament play.

The netters have the week to regroup and refocus. The schedule has been long with few breaks. The girls look forward to a week of practice to get ready to face Bennington on Tuesday, September 28. The team is ready to avenge the loss, and is confident that they will come out on top.

After the last regular season game against Bennington, the Warriors will prepare for sub-disticts to be held on November 3 and 4. The site for this year’s subs is Omaha Roncalli Catholic High School. Schools Assigned are Ashland-Greenwood, Bishop Neumann, Raymond Central, Wahoo, and Yutan.

PAST ARTICLES FROM 2008 SEASON:

The Wahoo High School Volleyball Team will travel to Bennington for the first round of the 2008 Conference Tournament on Thursday, October 16.

The Warriors will play Fort Calhoun in a 5:30 p.m. game. If the Warriors win this contest, they will then face the winner of the Bennington/D.C. West match-up at 7:30 p.m.

The remainder of the tournament will be held at Arlington on Saturday. Game times for Saturday are set for 9:00 a.m.

The Warriors rocked the house on Thursday, October 9, as they knocked off rated Centennial in a home match.

The Warriors started off the night in a stunning 25-8 victory.

“The girls came ready to play. We really focused on executing our offense by eliminating errors. We only had eight unforced errors in that first match. That’s the key!” commented Co-Head Coach Ann Egr.

The Warriors had a kill efficiency of .433 in the first match with 15 kills.

The rest of the evening was a battle. Co-Head Coach Trish Larson knew the girls would need to continue to play strong. “I told the girls, it’s not the size of the dog in the fight but the size of the fight in the dog. The girls were going to have to out-play them both physically and mentally to win,” she said.

Stats for the night: Senior Katie Sloup led the Warriors in kills with 26 for the evening. Both seniors Jen Proctor and Ashley Sloup hammered down 11 kills each, while sophomore Mahala Egr had 48 assists. Junior DS Annie Divis lead the team in ace serves for the evening with 4. Defensively, Katie Sloup lead the team with 24 digs, followed by Taylor Kavan with 18, Jen Proctor with 17 and senior liberio Benishia Siemer with 14. Sophomore Emily Brodahl scored 3 blocks along with Egr and K. Sloup.

According to both Egr and Larson, “This was a huge win! The girls were so pumped for this game. They were focused and ready to play. It was exciting to watch!”

The Warriors see ranked Syracuse Tuesday, October 14, in the last home match of the season. Come cheer the Warriors to victory!

Wahoo Warrior Volleyball put its name in the history books this week by capturing the title at the October 2 Ashland-Greenwood Bluejay’s annual volleyball tournament. This is the first time the netters have ever won this tournament!

The Warriors went into tournament action on Saturday with the number one seat. They had a stellar record of 3-0, beating Lincoln Lutheran, Fillmore Central and Fairbury in pool play.

“The girls set the bar high. They struggled here last year and were determined not to let history repeat itself! They wanted the hardware!” commented Coach Ann Egr.

The girls started tournament action against Class B Plattsmouth Saturday afternoon with a 25-20 and 25-21 finish. The Warriors crushed the ball with 29 kills during that match.

“We were able to execute our offense. The ball was moved around allowing all of our hitters the opportunity to crush the ball. In order for this to happen our passing game was on. That’s the key!” said Coach Trisha Larson.

“This was an exciting win for the girls. They set the bar high, and They continue to prove they are contenders,” Larson added.

Statistical highlights from the tournament.

The Warriors advanced to 11-3 after taking home the September 27 David City tournament runner-up trophy. Senior outside hitter Katie Sloup and sophomore setter Mahala Egr both earned spots on the All Tournament team.

According to Co-Head Coach Trisha Larson, “The girls played solid volleyball.  They ran the offense and were able to execute key plays.”

After a long wait to get back on the court, the Warriors suffered a loss to top-ranked David City Aquinas.

“It was a disappointment to the team. The girls know they can play with top ranked teams. Unfortunately, unforced errors limited the opportunity to play our tempo of volleyball,” remarked Co-Head Coach Ann Egr.

The Warriors hit the road this week with a triangular in Ft. Calhoun on Monday, Bishop Neumann on Tuesday, and the first round of the Blue Jay tournament on Thursday.

Both Egr and Larson agreed that, “the warriors are competitors. They’ve worked hard and will be ready to regroup and re-focus for the week. We’re hoping to have the fans there on Tuesday to get the girls fired up!"

Wahoo netters advanced to 9-2 early in the season with two victories Tuesday evening (September 23) in a triangular hosted by Arlington. Wahoo defeated Ashland 25-14 and 25-17. Wahoo had 27 kills for the match. Game one’s winning kill went to senior Christina Reynolds.

Wahoo got off to a slow start against Arlington but was able to battle back from a 25-27 loss.

“Arlington held us to seven kills in the first match. They played aggressive defensively and picked up everything we threw at them,” said co-head coach Trish Larson.

The Warriors were able to re-group and hammer out 14 kills in the second match, winning 25-22.

“The key to the third match was taking control of the game from the start. We knew that if the girls went out and played with pure determination they would get the win in the scorebook. That’s exactly what they did. We were very pleased with their efforts,” commented co-head coach Ann Egr.

The Warriors downed Arlington 25-16 in the third and final match of the night.

A Sloup with 7 kills, 2 block assists

B Siemer with 3 ace serves, 3 digs

The Warrior Volleyball squad improved to 7-2 over the weekend. The netters traveled to Logan View for the annual Raiders tourney.

They captured an early victory against Logan View in two solid sets, 25-19 and 25-9. The Warriors had a total of 23 kills with senior outside hitter Katie Sloup and sophomore middle hitter Emily Brodahl each earning 6 of the kills. Senior outside hitter Jennifer Proctor, who held her own at 5 kills, followed them closely. Seniors Ashley Sloup and Taylor Kavan each nailed three kills for the match, and sophomore setter Mahala Egr was 98% for assists.

The team suffered a loss in the second game of the day to Class A rated Omaha Bryan 20-25 and 14-25. Co-head Coaches Ann Egr and Trish Larson said this game will be used as an opportunity to tighten our defensive game and improve on executing the offense from serve receive.

“That’s they key! Taking a loss and turning it into a learning experience. Bryan did a great job of setting the tempo. They kept us to only 16 kills for the match,” Egr commented.

Coach Larsen added, “Playing teams of that caliber is a good thing. The girls realized that they can play with those teams.”

“Our ball handling at 80% efficiency was the key to this game. We struggled a bit in our serving and gave up some key points. This was a frustration as serving is usually our strength,” noted Larsen.

Thursday evening was an exciting night for Warrior ‘Powerhouse’ volleyball. All three of the teams captured wins as they hosted the Yutan Cheiftan squads.

Assistant coach, Monica Smith, was encouraged by their performance.

“It’s exciting to see the drills the girls execute in practice transform to wins during a competition. We have a solid C-team and it’s fun to watch the girls improve on a daily basis,” Smith commented.

The Junior Varsity team had stellar performances to add to the volleyball fury.  The Juniors defeated the Chieftains 25-20, 25-15. Leading the Warriors in points was sophomore Kylie Krecklow with a game total of 18 points.

Congrats to the Warrior Volleyball teams for their stellar performances this weekend! The Varsity squad captured FIRST place at the St. Wenceslaus Quad! 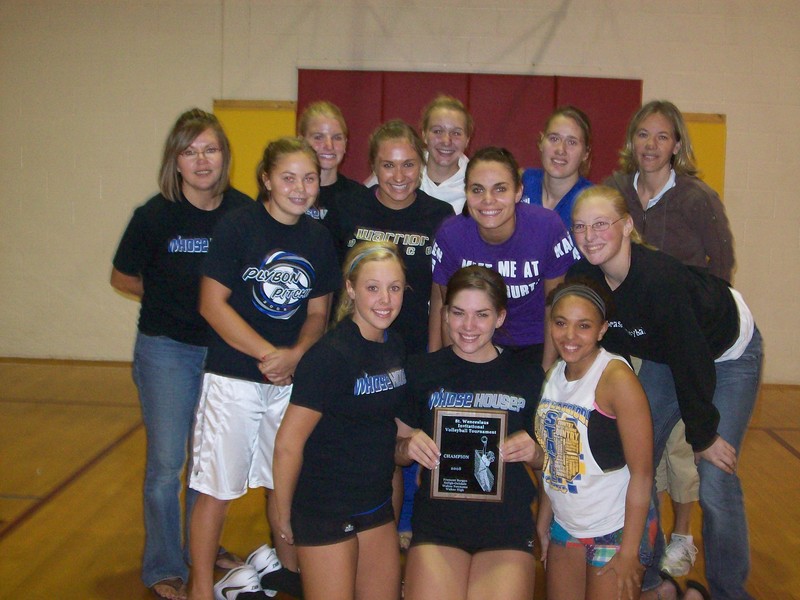 The JV team also took home first place honors at the Arlington Quad, and the C Team brought home a runner-up trophy from the Yutan Tourney.

The WHS JV volleyball girls took first place at the Arlington Quad over the weekend. 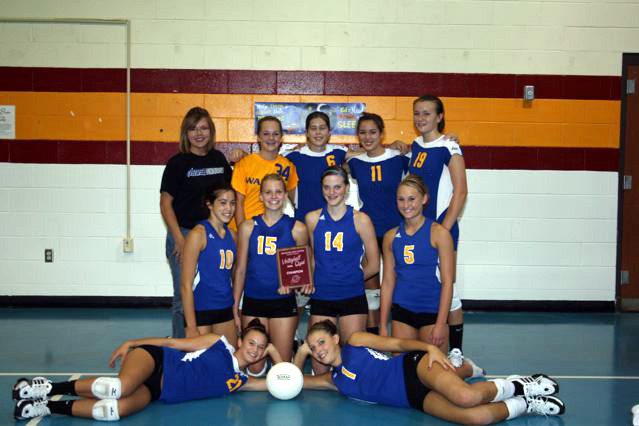 Launch the media gallery 3 player
The WHS JV volleyball girls took first place at the Arlington Quad over the weekend.

If you didn't get the opportunity to watch the teams compete over the weekend this is your lucky week! Wahoo hosts Yutan this Thursday with at 5:00 start for the C team. Come support WARRIOR VOLLEYBALL!!!

The Warrior Volleyball team took to the highway for their first contest Thursday evening, September 4 at Conestoga.

In the first match of the night, the Warriors defeated Conestoga 25-10, 25-8. The Warriors had a stellar night at the serving line. The girls were able to find the weak zones and nail their serves. The bench added a bonus spark as they were able to come in to finish the contest.

To top the night, the Warriors dominated Raymond Central in two matches 25-10 and 25-16. The goal for the evening was to walk away playing only four matches. Again, serving played a significant part in the victory.

Coaches Ann Egr and Trish Larson took the helm in their first season as co-head coaches.

“The girls are working extremely hard in practice and make strides everyday to improve. We’ve adopted the motto ‘Winners are born…Champions are made!’ They are pushing themselves to the next level, and it’s exciting to see this take place,” Egr commented.

Larson acknowledged that the team is fortunate to have a deep bench who can step onto the floor. The following girls all saw some playing time: Kylie Krecklow, Kayla Bennett, Annie Divis, Kirstin Nervig, Christina Reynolds, Kali Kramer, Jess Barry, and Sadie Murren.

The Warriors’ next contest will be Saturday, September 13 at the St. Wenceslaus Invite in Wahoo. They play Neumann at 9:00 a.m., Fremont Bergan at 12:00 p.m., and the third match against Neligh-Oakdale at 1:30. Come cheer them on!