Two elementary school students sat on the rubber floor inside of Hopkins Arena at Midland University and dropped pennies into a makeshift boat made from a small square of tinfoil.

Asher Endorf, from North Bend Central, counted methodically as James Green, from Bell Field Elementary, dropped pennies one by one into the foil while it floated in water inside of a red container.

As the 42nd penny dropped into the tin foil, water spilled over the boat’s sides.

This activity was just one of many that the 80 students from nine of the 16 schools encompassing the Educational Service Unit 2’s district participated in during the Elementary Science Olympiad held throughout the morning and afternoon Tuesday.

“This is an offshoot of Science Olympiad, which is a national organization," said Kelly Grinnell, professional developer for ESU 2. “We just use it as a fun way for kids to do activities while also learning about Nebraska’s state standards.”

Seven stations — including the boat activity — were set up around the gymnasium as the children learned about density and mass, STEM (science, technology, engineering and mathematics) fields, building structures and other principles.

Later in the afternoon, students worked with Midland students to create catapults that launched beanbags to create a fun end to the day.

While the Science Olympiad is held yearly for older students, many years elementary students haven’t had the opportunity to learn about science principles in a setting outside of the classroom, Grinnell said.

Some of students’ favorite stations included the boat and penny exercise and a straw tower building station where participants were given 30 straws, a meter of tape and wooden block.

The goal was to build as tall of a tower as possible with the elements provided.

Students were paired together and sat back to back. Inside of a box, an instructor created a model with the noodles and marshmallows and the goal was for one student to explain to the other — who couldn’t see the model — how to create it.

“You can’t believe how many of these kids could actually get pretty close to replicating the model,” the instructor said.

As event coordinator, Grinnell took the ideas and then adjusted them to best work for the groups, she said.

“Most of these ideas are ones that have been developed and used by multiple ESUs,” she said. “I adapted some of them, though, because I just wanted to do something a little bit different.”

Grinnell was happy with the Olympiad’s turnout. It’s something that she hopes will turn into an annual event for elementary school students, and she hopes to increase numbers even more in upcoming years.

An event like the elementary Science Olympiad has so many benefits, she said. One of the most important things it teaches students to do is think critically.

If a student is working on a project and it isn’t turning out the way he or she hoped, how can the student adapt to make it a success?

The Olympiad helps instill in students real-world skills, she said.

“Real life isn’t paper and pencils,” Grinnell said. “It’s about building, and refining, and experimenting once you try something and it doesn’t work. It’s about pushing past failure — how do you respond when something doesn’t work?

"It’s just like the boat building. They would try something and it would sink, and then they would take the pennies out and continually refine what they were doing. Those are the kinds of experiences kids need so that they can figure out how to solve the problem. If it sinks after 10 pennies, what are you going to do to make sure that doesn’t happen again?” 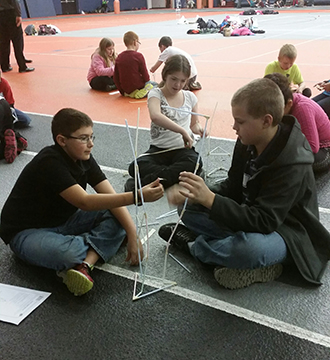 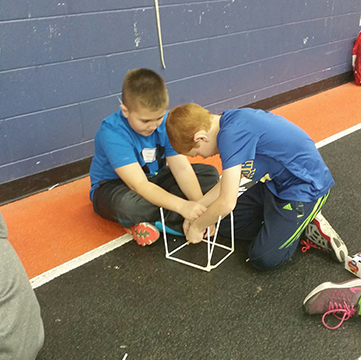