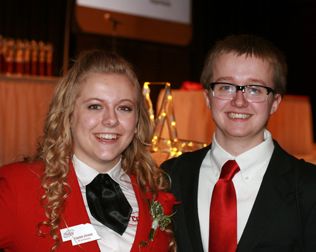 On Sunday, April 6, 22 students from Wahoo High School were part of a larger group of high school students from around the state to help kick off the 2014 Nebraska Family, Career, and Community Leaders of America (FCCLA) State Leadership Conference.

The conference is the annual showcase of the chapter’s events and recognitions of students’ efforts throughout the year.

The theme for the conference was “Ignite your Passion” and members were challenged to work hard and make positive changes throughout the conference.

This year, students fulfilled a variety of roles at the conference. Senior Evann Vrana, who has been serving as the 2013-14 State Vice President of Finance, assisted with many tasks as one of the eight state officers of the organization for the year. In addition, junior Lindsey Hartshorn and sophomore Cole Talbert represented Wahoo and Region A as State Officer Candidates.

WHS freshman Corby Brigham (center) has been chosen to serve as the District 3 FCCLA President for 2014-2015. 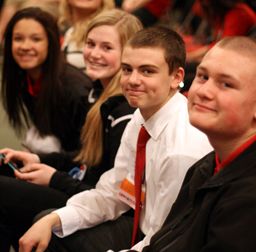 Launch the media gallery 2 player
WHS freshman Corby Brigham (center) has been chosen to serve as the District 3 FCCLA President for 2014-2015.
Finally, freshmen Cole Krecklow, Corby Brigham and Maddie Talbert competed in Nebraska STAR events, along with juniors Miranda Rademaker, Rochelle Olson, and Kristen Tomjack, and Vrana. STAR (Students Taking Action with Recognition) events are designed to challenge students’ skills as they work to solve a problem, take on a leadership role, and report on their results.

In the course of the three-day conference, students heard from dynamic speakers such as Grant Baldwin, who spoke to the students about stepping out of their comfort zone to help others. Many students attended the Opportunity Fair and spoke to college representatives and even had the chance to blend smoothies using the power of pedaling a bicycle.

Warrior FCCLA members attend a guest speaker session at the 2014 State Leadership Conference at the Cornhusker in Lincoln. 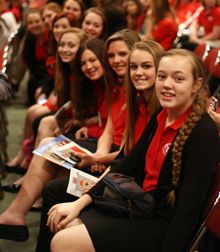 Launch the media gallery 3 player
Warrior FCCLA members attend a guest speaker session at the 2014 State Leadership Conference at the Cornhusker in Lincoln.

“My favorite part about State was hearing from great speakers. There was a presentation that focused on using your skills to make positive changes. It really motivated me to think about the changes I think are important,” stated junior Hannah Storm.

Wahoo High School FCCLA was also well represented by the honors and awards that were given. The chapter was awarded a Gold Chapter Award for the third year in a row and was also recognized as the second place winner of the “Families First” contest. In addition, Cole Talbert was elected as a 2014-15 State Officer, giving Wahoo its first ever back-to-back state officers. In addition, Corby Brigham was chosen as the 2014-15 District 3 President.

Overall, it was a great event for our students to experience.

The chapter will officially end its year at their barbeque at the end of the year on May 4.

Congratulations to WHS FCCLA on another successful year.