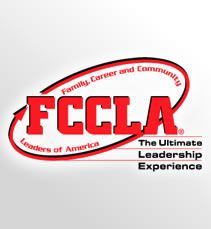 Fremont, NE-Members of the Wahoo High School Family, Career, and Community Leaders of America (FCCLA) attended the annual District Leadership Conference held at Midland University on Thursday, October 21. The chapter was represented by 19 members and was one of the largest chapters in attendance.

The conference covered a variety of FCCLA topics and members were able to network with other chapters in the area to gain new ideas for programs and service. Members attended workshops that focused on improving student health, skin cancer awareness, hospitality and tourism careers, FCCLA knowledge, and leadership development. In addition, members heard from Mr. Paul Bade, a teacher at Norris Middle School, who is also a person living with Tourette’s Syndrome. Mr. Bade spoke on the challenges he has overcome and how every teen should use their skills to lead others in a positive direction.

In addition to attending different sessions, members of the chapter also organized a raffle on behalf of Districts III and IV. Raffle tickets were sold for door prizes, which were donated from each chapter in attendance. The raffle raised $120 to be contributed to Nebraska CARES.

Finally, chapter members got to see as Wahoo High School junior Anmerie Schirmer was installed as the District III Vice President for the 2010-11 school year. Anmerie also went on to be chosen as the District III Representative as a Nebraska State Office Candidate. Anmerie will continue her efforts to become a state officer in the spring.

FCCLA is a dynamic and effective national student organization that helps young men and women become leaders and address important personal, family, work, and societal issues through family and consumer sciences education, or as determined by the state department of education. FCCLA has more than 220,000 members and nearly 7,000 chapters from 50 state associations and the District of Columbia, Puerto Rico, and the Virgin Islands. The organization has involved more than ten million youth since its founding in 1945.