Members of the WHS FCCLA attended the Oct. 30 District III Fall Leadership Conference at the Henry Doorly Zoo in Omaha. 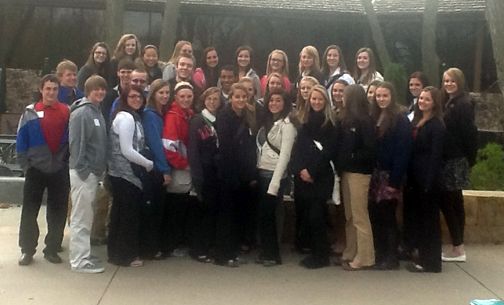 The FCCLA District III Fall Leadership Conference was held Tuesday, October 30, at Omaha’s Henry Doorly Zoo. Student members started their day exploring the animals at the zoo. They were challenged to spell the name of an FCCLA related term by taking a picture with an animal that started with each letter of the word given to them.

As part of FCCLA’s community service efforts, each chapter was challenged to raise money for their local humane societies. The Wahoo High School chapter raised a total of $85, which was donated to Saunders County Lost Pets.

State officer candidates Evann Vrana from Wahoo, and Molly Bond from Elkhorn High, each gave their speeches and answered two FCCLA-related questions to be judged by the voting delegates. Both candidates will move on in the election process and run for State Officer at the Nebraska FCCLA State Leadership Conference in April.

FCCLA: The Ultimate Leadership Experience is a dynamic and effective national student organization that helps young men and women become leaders and address important personal, family, work, and societal issues through family and consumer sciences education, or related courses as determined by the state department of education. FCCLA has more than 202,000 members and nearly 6,500 chapters from 50 state associations, Puerto Rico, and the Virgin Islands. The organization has involved more than ten million youth since its founding in 1945.