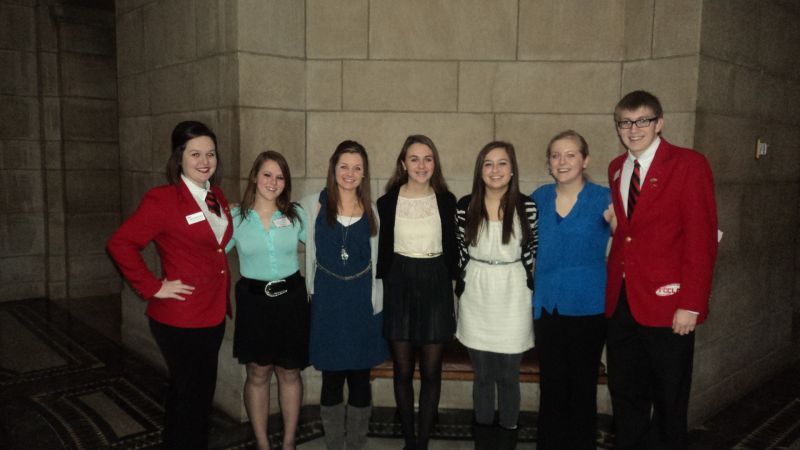 Students began the day with presentations from Senator Kate Sullivan and Senator Colby Coash. Senator Sullivan from Cedar Rapids, who is the new Chair of the Education Committee, spoke about her career path to the legislature and her continued support of career and technical education. Senator Coash from Lincoln spoke on his efforts to improve child and family living in the state of Nebraska through his sponsoring of multiple bills related to such.

Next students were given a tour of the Capitol Building, in which they saw the Supreme Court chambers, old Senate chambers, and the art and sculpture featured in the building. The tour ended with some time in the gallery of the Unicameral in which they, along with the 25 other students, were recognized as being part of Nebraska FCCLA. After seeing our government in action for a while, they went to lunch at the Governor's Mansion, were they were joined by a group of Senators, including Senator Jerry Johnson of Wahoo.

The students ended their day sitting in on the Education Committee Hearing in which they heard testimony related to the adoption of the Nebraska Career Technical Education Grant Program (LB 480) and other issues related to career and technical education.

“This day is held annually through the support of the Nebraska FCCLA and NAFCS and I truly feel it is important to attend to show our students the Capitol and to educate our senators on FCCLA and family and consumer sciences in the state of Nebraska,” said WHS FCS Instructor Allison Kreifels concerning the day.

“This is the second time I’ve been able to attend and each year I learn something new about our Unicameral and how I can help make changes that could impact our state for good,” commented WHS junior Evann Vrana. “I look forward to this event every year.”