Warrior AcaDeca attended the stage production of War Horse on Thurs., April 10 at the Orpheum Theater in downtown Omaha. The setting of this multiple Tony award-winning production corresponded with the students' year-long study of the era of World War I.
Warrior AcaDeca students visited the National WWI Museum in Kansas City on Oct. 9. 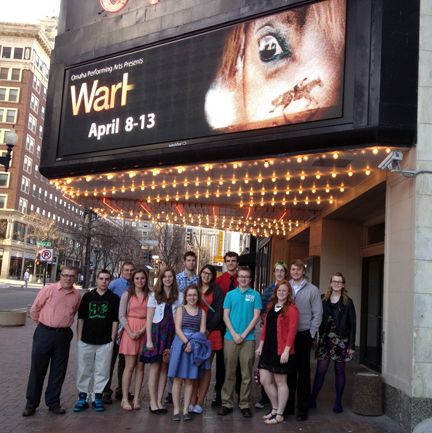 Warrior AcaDeca attended the stage production of War Horse on Thurs., April 10 at the Orpheum Theater in downtown Omaha. The setting of this multiple Tony award-winning production corresponded with the students' year-long study of the era of World War I.

Think you can't get emotionally attached to a puppet? Think again!

As a reward for a school year of hard work and accomplishment, the Wahoo High School Academic Decathlon class enjoyed a trip to downtown Omaha on Thursday, April 10.

Following dinner in the Old Market, students attended the Broadway production of War Horse, which was performed on the stage of the Orpheum Theater.

The musical is based on the best-selling historical fiction novel of the same name by Michael Morpurgo. The performance has won multiple Tony awards, and features life-size horse puppets. The setting of the musical is the era of World War I, which corresponds to the 2013-2014 AcaDeca topic of study.

Synopsis of the story (from www.broadway.com): War Horse centers on the relationship between Albert, a teenager growing up on a farm in Devon, England, just before World War I, and his beloved half-thoroughbred horse, Joey. Albert’s family is poor, and his father raises cash by selling Joey to the cavalry as the war begins in 1914. Too young to enlist, Albert craves news of his horse, which was shipped to the battlefield in France. Three years later, Albert runs away to join the army, determined to find Joey and bring him home. Meanwhile, this smart and brave horse is pulled into service on both sides of the conflict before being left on his own in no-man’s land, surrounded by trenches and barbed wire.

"I thought it was a very interesting play that was very creatively directed, and the design of the puppets was amazing," commented WHS sophomore Lydia Privett.

Students and sponsors enjoyed the incredible performance, and were impressed by the realistic movements of the horse puppets, which were created by the Handspring Puppet Company in South Africa. Many commented about how easy it was to grow attached to the horse characters, completely forgetting the fact that they were being manipulated by people on stage.

A review published in the Chicago Tribune in 2011 said it best: "As anyone who saw this theatrical piece well knows, to experience War Horse onstage is to wonder how these puppets manage to etch themselves so deeply into your soul. It's partly the sentiment of the story, for sure . . . These horses (young Joey's puppet-swapping change to maturity is simply breathtaking) seem to pulse in the very air - breathing, churning and always teaching us, or maybe just reminding us, that the world never stands still and that all you can do is find your love and not get mowed down by the big guns."

The Warrior AcaDeca team has completed its study of World War I, and now begins studying the newly-announced 2014-2015 curriculum topic: "New Alternatives in Energy: Ingenuity and Innovation."

Ten WHS students trekked to Fremont on Saturday, Jan. 18 to take tests. Is there a better way to spend a weekend?!

Warrior AcaDeca team members definitely left their mark on the competition, bringing home 21 individual medals, and a 2nd place finish in the Super Quiz competition (a quiz bowl competition covering the history of World War I)!

Congratulations to the following: 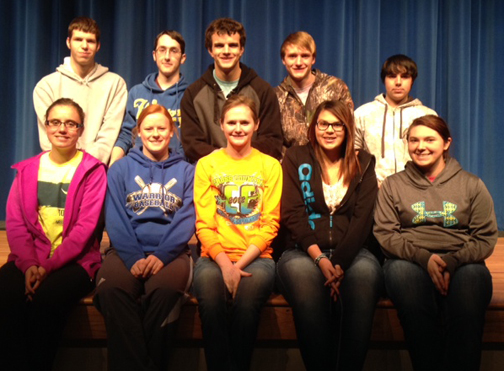 The top 33 percent of competing teams across Nebraska qualified for the State AcaDeca Meet, which will be held late-February at the University of Nebraska at Omaha. Unfortunately, Wahoo fell just short of qualifying for State. Of the 22 small schools in the district competition, Wahoo finished in 6th place, missing 5th place by a single question. The top five teams will advance to State.

"While we're obviously disappointed that we didn't qualify for State, Mr. Tomjack and I were very happy with our students' performance! They worked very hard, and sixth place out of 22 in such a rigorous competition is nothing to be ashamed of," commented co-AcaDeca sponsor David Privett. "Twenty-one medals and second place in the Super Quiz are great season highlights, and we will do everything we can to top that next year!"

Four students brought home medals from the competition. Congratulations to the following:

The Academic Decathlon is now preparing for its regional competition, which will be held on Saturday, Jan. 18, 2014. Winners of each regional site will advance to the State Competition, February 21-22 at the University of Nebraska at Omaha.

The WHS AcaDeca team has advanced to the State Meet for the past two years, and is hoping for its third straight visit. 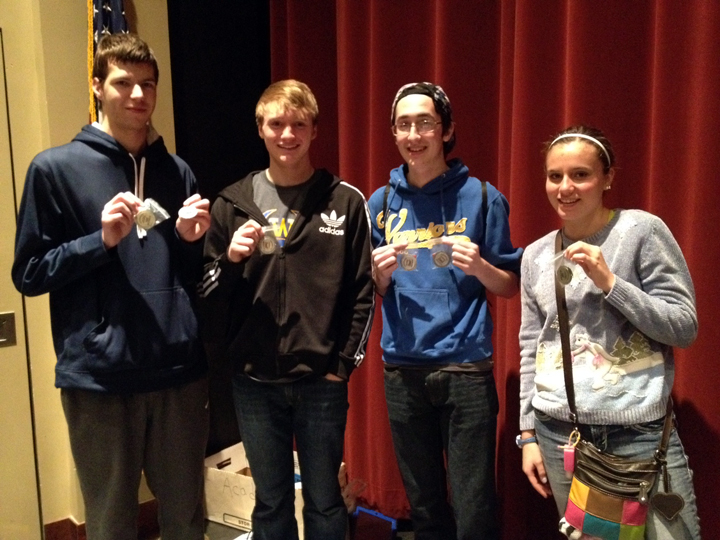 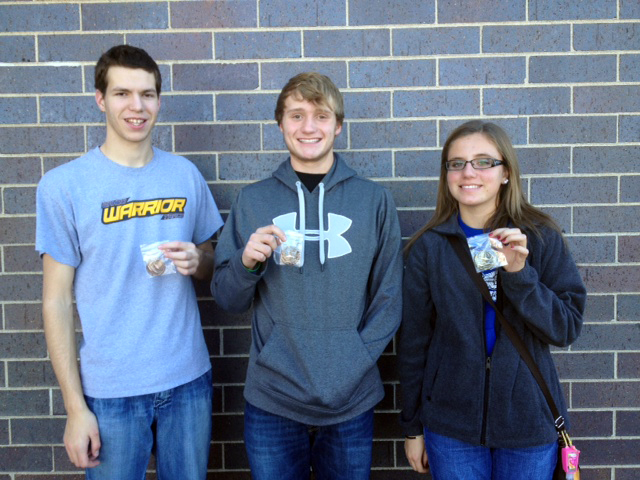 The Warrior Academic Decathlon students competed in a scrimmage on Saturday, Nov. 9, 2013 at Pius X High School in Lincoln.

Three students brought home medals from the competition. Congratulations to the following:

Wahoo prepares for its second scrimmage, which is scheduled for Saturday, Dec. 7 at Lincoln Northeast High School. Good luck Warriors! 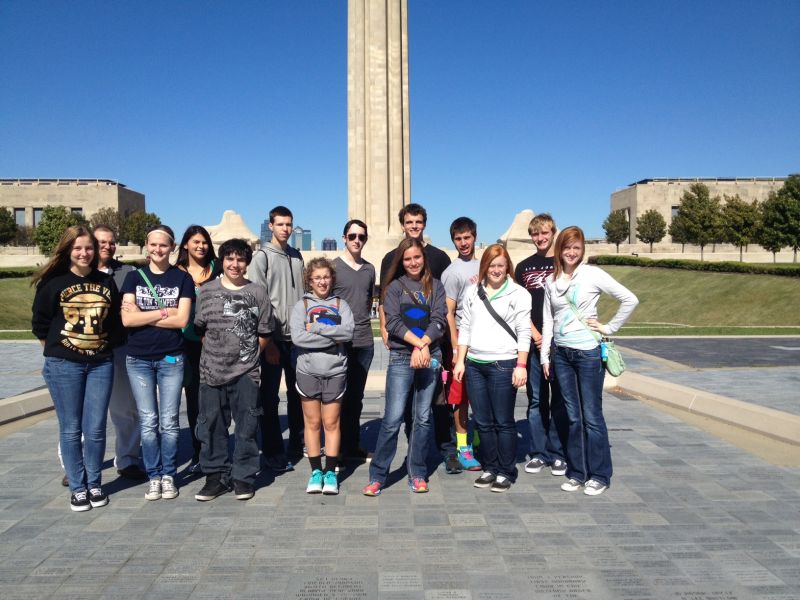 A single crack of gunfire in 1914 sparked an event that forever changed our world.

In all, 36 nations took up arms in the world's first global conflict. During the "Great War," later known as "World War I," 65 million men and women served in the military. More than nine million died.

"World War I" is the topic of study for the 2013 Academic Decathlon.

Directly inside the entrance of the National WWI Museum is a walkway that overlooks a field of 9,000 poppies, each representing 1,000 lives lost during the War. 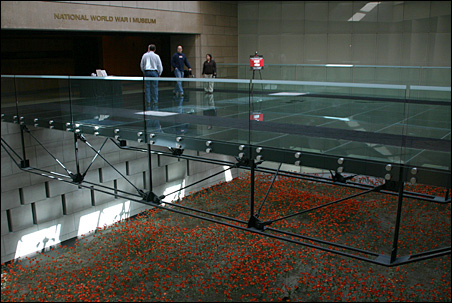 Launch the media gallery 2 player
Directly inside the entrance of the National WWI Museum is a walkway that overlooks a field of 9,000 poppies, each representing 1,000 lives lost during the War.
Upon entering the museum, students stood on an elevated glass-bottomed walkway, overlooking a field of 9,000 poppies, each representing 1,000 souls who lost their lives during the War.

"Poppies have been the symbol of those who have served and died at war since WWI, where poppies flourished in the battlefields of France, the site of trench warfare," according to the museum's website.

In a place of destruction where almost nothing grew, poppies were the only flower to thrive in the environment.

Students viewed unique artifacts, including a 1917 all-original Harley-Davidson motorcycle, General Pershing's headquarters flag, and wool socks knitted by First Lady Edith Wilson. Students were also able to connect with soldiers through numerous displays of their personal items, from flying goggles and shaving kits to pocket diaries, hand-written letters and photos of loved ones.

Students ended the day by studying the symbolism in the architecture of the Liberty Memorial Tower, which was completed and dedicated in 1926. Students were able to ascend to the top of the 217-foot memorial for a breathtaking view of the Kansas City skyline.

Students were able to view the Kansas City skyline from the top of the Liberty Memorial Tower. 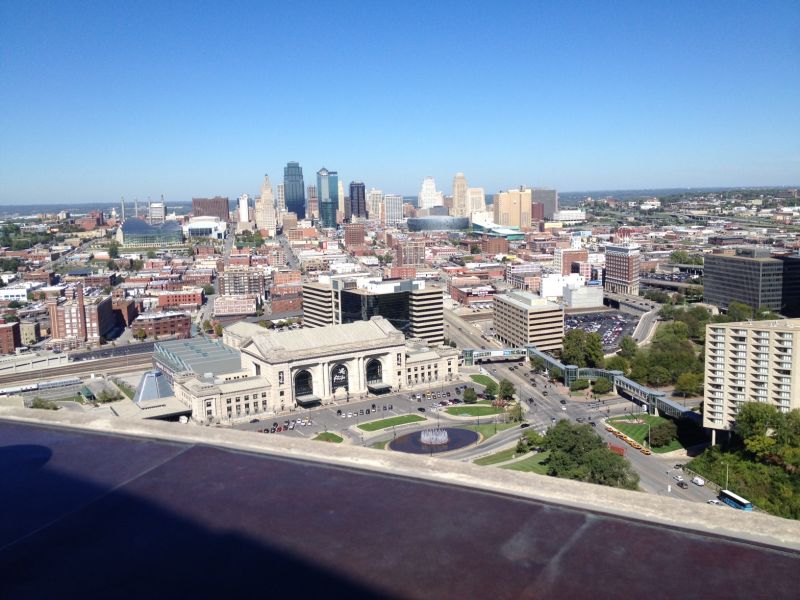 Launch the media gallery 3 player
Students were able to view the Kansas City skyline from the top of the Liberty Memorial Tower.

The United States Academic Decathlon (USAD) is a national scholastic competition dedicated to promoting and rewarding the academic achievement of students. Since the 2012-2013 academic year, Wahoo High School has offered an Academic Decathlon class as an elective. The course is advised by WHS Science Instructor Clayton Tomjack and WPS Media Director David Privett. This year there are 15 students enrolled in the class.

Each year the USAD announces a broad topic of study, which is then spread over 10 academic areas (hence the label of "decathlon"). Topics of study include Art, Economics, Language & Literature (including a novel study), Math, Music, Science and Social Studies. There are also essay, speech and interview events at the state and national competitions. Students study this curriculum throughout the year, in preparation for competition in the spring.

This year students will study all aspects of what is often referred to as "the Forgotten War." From the growing tensions produced by the imperialism of the British/German/Austro-Hungarian/Ottoman Empires in the pre-war days, to the formation of the Central Powers and Triple Entente, to the assassination of Austrian Archduke Franz Ferdinand, to the sinking of the Lusitania and propaganda produced by the government of the United States to persuade the public of the necessity to enter the conflict, World War I brought enormous changes to our world.

Other 2013-2014 curricular focuses:
Science: an introduction to genetics and includes a study of some of the significant advancements made in the field of genetics in the early twentieth century.
Language & Literature: includes critical reading, one novel, two poems, and two short stories. This year's novel study is The Sun Also Rises by Ernest Hemingway.
Art: covers art fundamentals and focuses on European and American art of the early twentieth century, including a section on WWI art.
Music: covers basic elements of music theory and focuses on early twentieth century music (both popular and classical works), and includes a section on musical responses to WWI.
Economics: covers fundamental economic concepts, microeconomics, and macroeconomics. This curriculum also includes a thematic section providing an economic history of WWI.
Mathematics: covers algebra and trigonometry.

In preparation for the regional competition on Jan. 18, 2014, students have the opportunity to compete in two practice scrimmages each fall.

The first Academic Decathlon scrimmage is scheduled is scheduled for Saturday, Nov. 9 at Pius X High School in Lincoln. This competition will focus on the Art, Language & Literature, Mathematics, and Social Studies sections of the curriculum.

The second scrimmage will be hosted by Lincoln Northeast High School on Dec. 7, covering Economics, Music and Science.