Congratulations to the following medal winners at the 2017 Academic Decathlon State Finals at Creighton University: 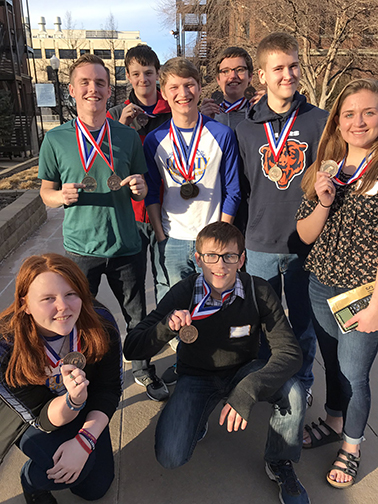 The Treaty of Versailles, and increasing German aggression because of what it outlined, combined with Italian and Japanese hostility, set the stage for a variety of "theaters" in the late 1930’s which, combined, created the most destructive event in world history: World War II.

The WHS Academic Decathlon class has been studying all aspects of World War II (the 2016-2017 assigned topic) since the beginning of the school year. From the start of the War in 1939, to all its theaters, to the German atrocities committed in concentration camps, to the United States' entrance into the war following Pearl Harbor, to the controversial decision to drop atomic bombs on Japan, putting a swift end to the war in 1945, students have studied all of these topics in preparation for the yearly regional competition, where the WHS team competes with other AcaDeca teams from around the state.

The 2017 Nebraska Academic Decathlon Regional Competition was held on Saturday, January 21 on the campus of Midland University in Fremont, NE. Individually, the Warriors brought home 10 individual medals, and took 2nd place in the annual Super Quiz (team oral competition over the history of WWII)!

As a team, Wahoo finished in 2nd place in the regional competition, and placed 4th amongst all 25 competing “Small” and “Very Small” schools across the state.

Wahoo’s performance has qualified them for the 2017 Nebraska Academic State Finals, which will be held February 17-18 on the campus of Creighton University in Omaha. This will be the Warriors’ 5th appearance at State, out of the 7 years it has competed!

For those not familiar with the Academic Decathlon, it is a national, ten-event scholastic competition for teams of high school students. Each high school team consists of six students: two Honors students (“A” GPA), two Scholastic students (“B” GPA), and two Varsity students (“C” or below GPA). (At State, teams are increased to three students per category.)

The 2016-2017 Academic Decathlon topic of study is World War II. Students have spent the school year studying the following:

• SCIENCE: The science topic is an introduction to atomic and nuclear physics, and includes a section on the Manhattan Project and the development of the atomic bomb.

• ART: The art curriculum includes a section on art fundamentals and largely focuses on the art of the World War II era.

• MUSIC: The music curriculum includes basic elements of music theory and focuses on the music of the World War II era.

The Warrior AcaDeca students received their state-qualifying announcement on Monday morning (Jan. 23), and will now work hard preparing for the State Competition at Creighton. At State, in addition to their usual competition in seven academic areas, these students also compete in three additional competitions: essay, speech (prepared and impromptu), and professional interview.

"I was so proud of how our team performed at regionals," commented WHS Academic Decathlon Co-Sponsor Nicole Burg. "The amount of work that our team put into preparing for this competition is reflected in the amount of medals they brought home. So excited to see how this team does at State!" 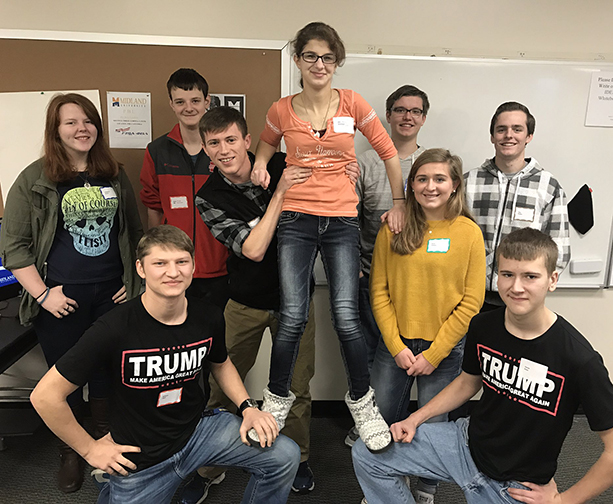