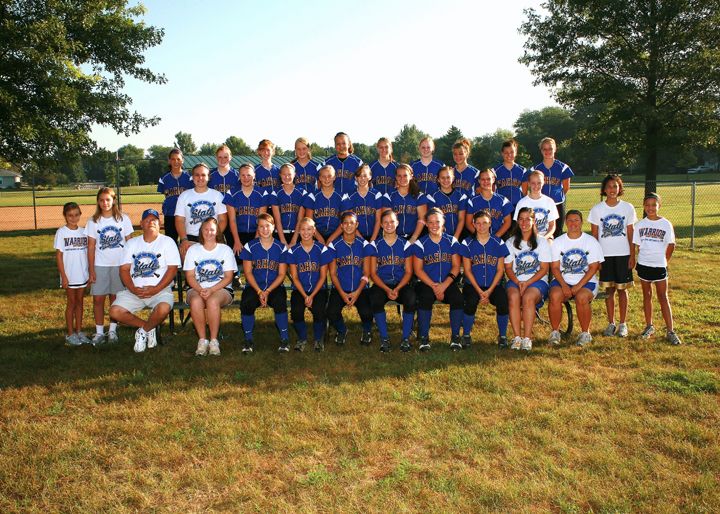 Warrior Softball Takes It All the Way; Finishes 2010 Season 26-2

Congratulations to Coach Katrina Christen, who was selected All Area Softball Coach (second year!) and selected to coach the Nebraska Coaches Association All-Star Game during the summer of 2011! 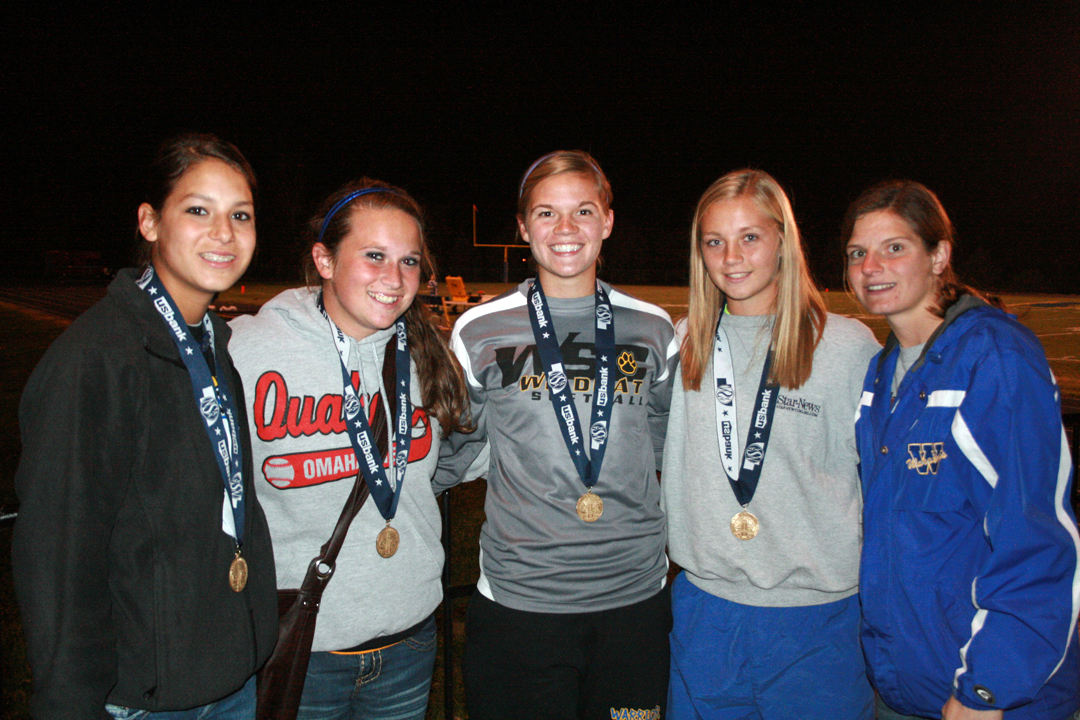 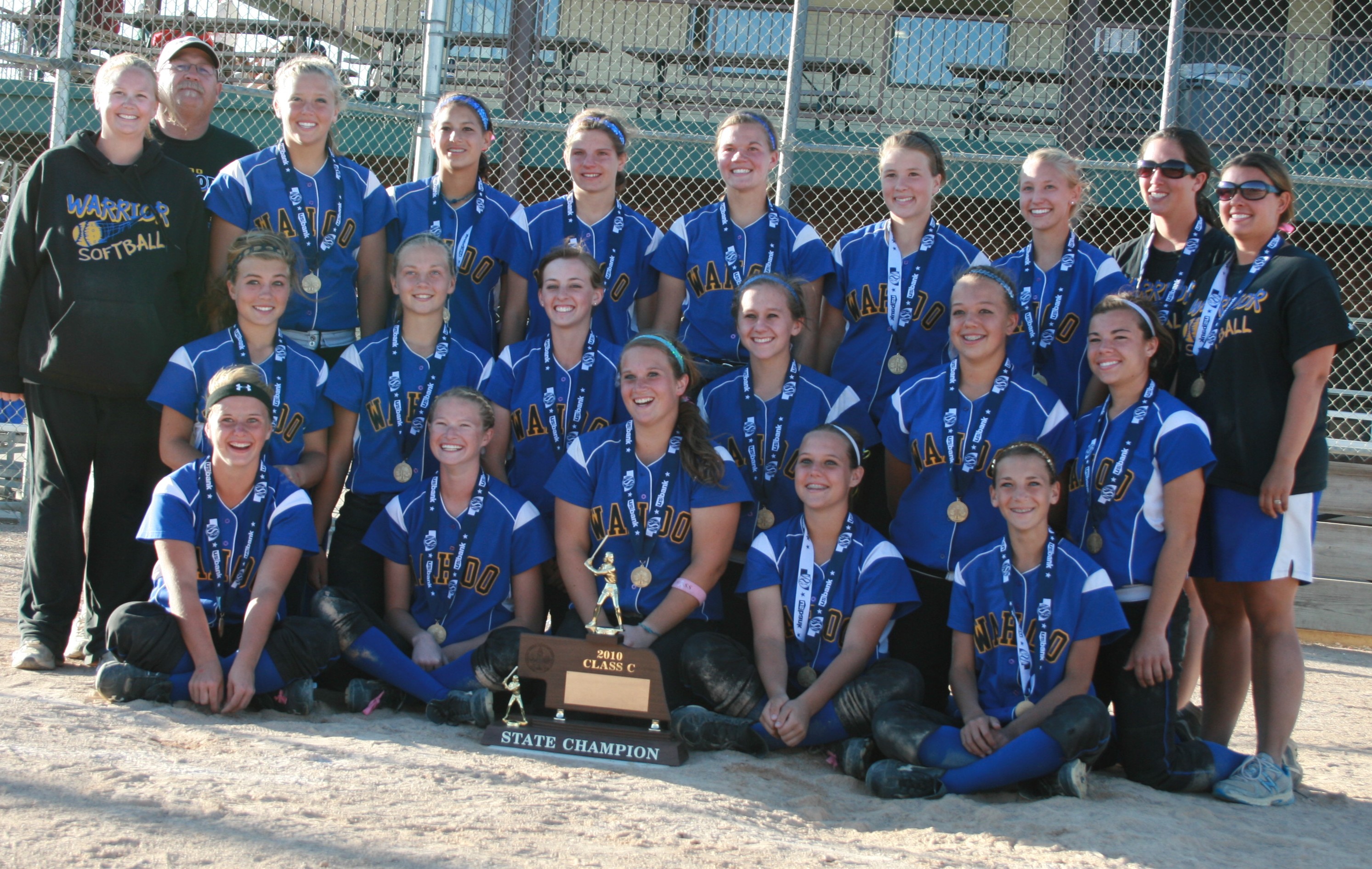 The Warrior softball team ended the season with the biggest tournament win in girls history at Wahoo High School!

On Friday, October 15 the softball team brought home the gold medals from the state softball tournament!

In the first game of the state tournament the Warriors faced their conference foes, the Ashland-Greenwood Bluejays, for the 3rd time this season. They dominated the game from the start and never looked back, winning with a score of 10-2. The bats were hot from the get go in game one. The team finished with a total of 13 hits. Morgan Hancock, who finished 3-4 with 4 RBI’s, led the hot bats. Aubrey Voboril, Taylor Otte, and Tierney Gensler were also sticking the ball well and went 2-3 a piece. Senior Mattie Murren finished 1-2 at the plate. Aubrey Voboril got the win on the mound, only giving up 4 hits. The entire defense played an awesome game behind Voboril.

Next to the plate was sophomore Morgan Talbert. Morgan had a great at bat and ended up getting a walk! With a base runner on, senior Tierney Gensler made her way to the plate. She stepped up and drilled a line drive to the third baseman, who dropped ball, but threw out Morgan at 2nd base. There sat the Warriors with 2 outs and the top of their line up. Warrior lead off hitter, Paige Otte, made her way to the plate while every Warrior fan prayed for a base hit. With a count of 2-1 Paige hit a base shot to the 5-6 hole, and advanced Tierney to 2nd base.

Next to the plate came senior Mattie Murren, who played the whole state tournament with a broken hand. With runners on 1st and 2nd Mattie drilled a base shot and scored Tierney from 2nd base to tie the game. Warrior hot hitter, Morgan Hancock, stepped to the plate to try to finish the game, and just that she did. She hit a screamer up the middle and drove in Paige and Mattie for the winning runs of the game. Aubrey Voboril once again took the win on the mound pitching an outstanding game.

The next opponent for the Warrior softball team was the defending state champs, the Friend Bulldogs. This game was a battle of pitching and defense that ended in favor of the Warriors. The game remained scoreless until the top of the 3rd inning when the Warrior bats came alive. In that inning the top of the Wahoo batting line up came alive. With two outs, Paige Otte doubled, Mattie Murren hit a single, Morgan Hancock hit a double, and Aubrey Voboril hit a double. These hits put 3 runs on the scoreboard. These three runs proved to be enough for the Warrior win. Once again, Voboril took the win on the mound, striking out nine and giving up only 3 hits. Taylor Otte and Morgan Talbert also had base hits in the game. In the field Mattie Murren and Sydney Hancock made many outstanding plays.

This win put the Warriors in the championship game undefeated.

In the championship game Wahoo once again faced the Ashland-Greenwood Bluejays. The Bluejays jumped out to an early lead with a Nagle homerun. The very next inning, with one runner on, Morgan Hancock ripped a homerun to give the Warriors their first lead of the game. After this lead the Warriors never looked back.

The bats came alive and they took the championship game 12-4. In this final game the Warriors were lead at the plate by Michaela Lanik, going 2-2 with 2 runs and an RBI. Paige Otte was 3-5, Mattie Murren was 2-5, Sydney Hancock was 1-4, Morgan Talbert was 1-2, and Tierney Gensler was 1-4. Voboril took the final win on the mound for the state championship.

The championship team ended with an outstanding record of 26-2. This was a magical season that could not have ended any better. These girls played with more heart, determination, and focus than one could ask for. The six talented seniors will truly be missed next year. One can only hope the younger players have learned a little about dedication and work ethic from these young ladies.

The Girls State Softball Tournament is scheduled for Wednesday-Friday, October 13-15 in Hastings, NE. Full tournament bracket will be posted soon.

#1-Seeded Wahoo (16-2) will play in the District Softball Tournament on October 7-8 at Hackberry Park in Wahoo. The Warriors will debut in Game 3, October 7 at 1:00 p.m. Please click HERE to view the entire tournament bracket. Good luck Warriors!

The Wahoo Warrior Softball team has rolled to a 12-1 start and a Class C #1 ranking!

The Warriors are sitting with a 5-1 record against conference foes. The one loss came at the hands of the class B, #4-rated Bennington Badgers. Although this was a loss, it was a great game. The final score ended 4-3 in favor of Bennington. The Badgers rolled to a 4-0 lead in the first inning. The Warriors never gave up and chipped away to cut the lead to 4-3.

The Warriors will be in action this weekend in Valparaiso for the conference tournament.

The Wahoo Warrior Softball team is off to an outstanding start!

WAHOO    7
MILFORD    1
Our first opponent was the Milford Eagles. The Warriors won this contest 7-1. Morgan and Sydney Hancock led the Warrior offense. Morgan went 3-4 with a single, double and a triple and Sydney went 2-3 with a single and a double. Aubrey Voboril got the win on the mound, giving up only 3 hits.

WAHOO    5
FT CALHOUN    2
The Warriors next took on the Ft. Calhoun Pioneers and defeated them 5-2. Mattie Murren led the Warriors at the plate with a double and a home run. Aubrey Voboril had a hot bat also going 2-3. She also took the win on the mound. The Warrior defense played solid throughout this contest.

WAHOO    13
NEUMANN    7
Wahoo's third victim on the diamond was the Neumann Cavaliers. They won this contest 13-7. Morgan Hancock led the Warrior bats. She went 3-4 at the plate with a single, double, and a home run. Her sister Sydney also had a hot bat going 2-3. Paige and Taylor Otte went 2-4 at the plate, and Alicia Iversen came off the bench and went 1-1. Voboril was once again successful on the mound taking home the win. The girls are playing well and hungry for more victorious games! 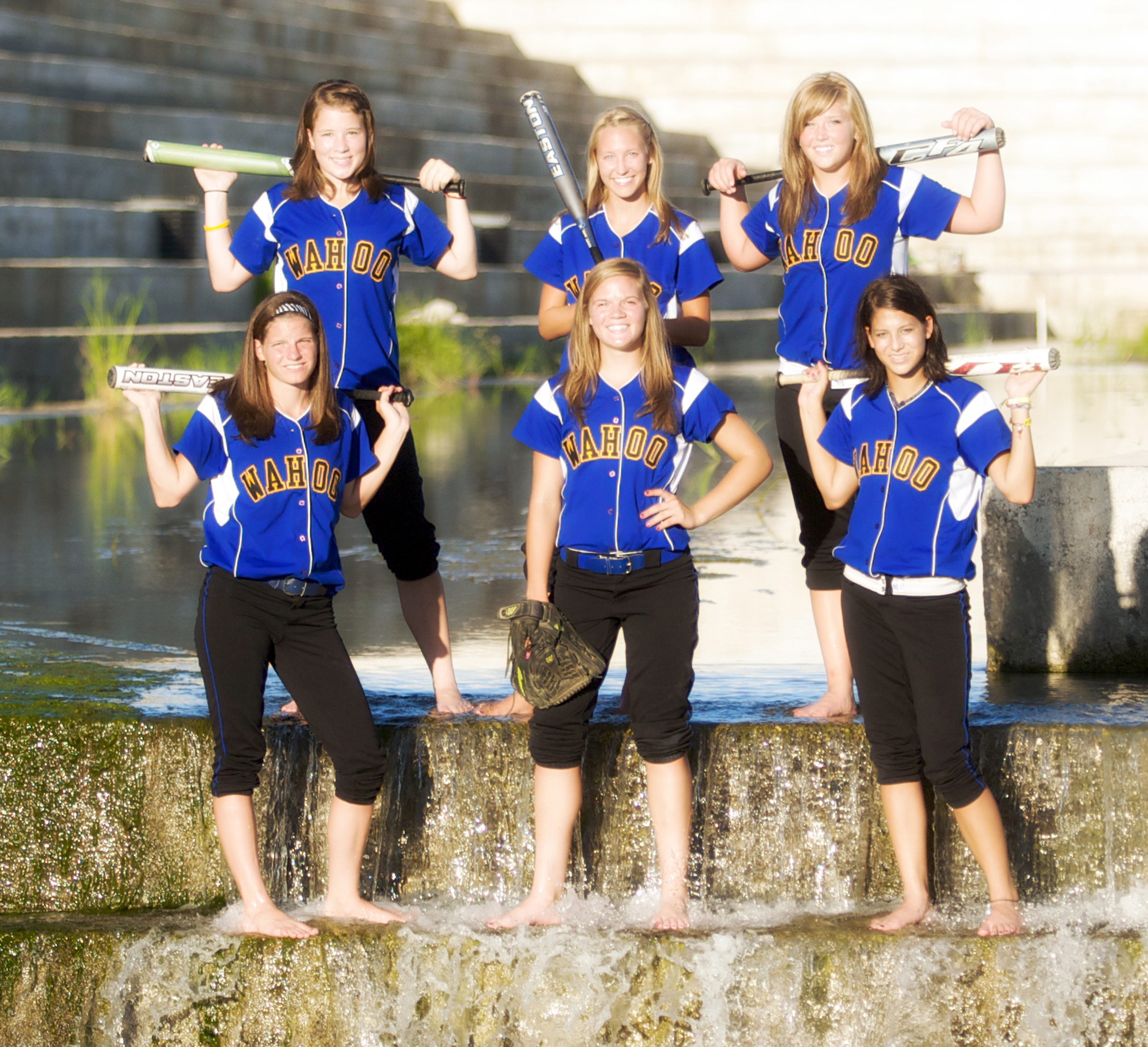