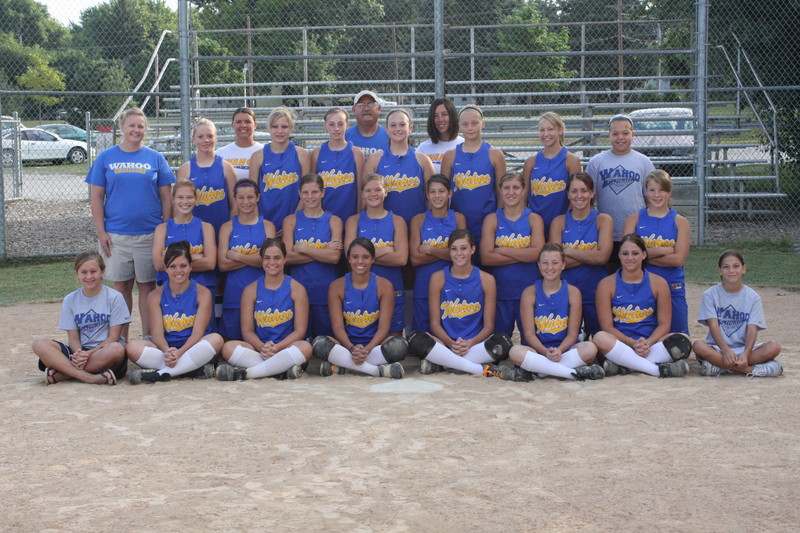 The Wahoo Warrior softball team had an exciting finish to the season. They ended with a 22-9 record and a third place finish at the State Tournament.

With an early exit from districts, the State Tournament seemed out of the question; however, all of the stars aligned right and they got a wild card. Going into the tournament, they were to play the number two seeded Twin River Titans. The Titans' pitcher came in with an ERA of 0.56. The first two innings were scoreless, and then in the third inning Sydney Hancock hit a home run. This opened up the flood gates for many hits and runs tom follow.

Morgan Hancock hit an inside-the-park home run and Sydney Hancock hit another over-the-fence home run in that game. The Warriors went on to win that game 12-3. Aubrey Voboril got the win
on the mound and Jordan Hinrichs and Taylor Flessner had great defensive plays.

In game two the Warriors faced the number three seeded Gothenburg team. The girls one this one 6-3. Morgan Hancock had another good showing at the plate, going 2-4, and Aubrey Voboril went 3-4 at the plate with 2 RBI. Aubrey also got the win on the mound striking out 3. Mattie Murren had a great game catching behind the plate. This win put the Warriors undefeated in the semi-final game against the Yurtan/Mead Patriots, who were the top seed of the tournament.

The game was an exciting one throughout. The Patriots got the win 2-1. Through five innings it was a scoreless game, and then in the 5th Yutan/Mead scored 1. In the top of the 6th, Mattie Murren got a base hit and then Morgan Hancock hit a triple to drive in the tying run. However, in the bottom of the 6th inning, Yutan/Mead scored the go ahead run. The girls tried to tie it up with two base runners on in the seventh, but could not produce the run. It was a great game all the way around.

In game 4, an elimination game, the Warriors faced Bennington. The Warriors dropped this one with a score of 6-1. In this game the Warriors left 12 base runners on. Taylor Flessner went 3-3 and Jordan Hinrichs went 1-3.

The girls had a fantastic season all the way around. They should all be very proud of themselves. Morgan Hancock ended up the leading hitter with an average of .394 and Aubrey Voboril was close behind with .372. This team will greatly miss the senior leadership of Taylor Flessner, Jordan Hinrichs, Hilary Plybon, Shelby Partridge, Mallory Shanahan, and Katie Stuchlik. They were awesome softball players and awesome people to have around. Thanks girls!

PAST ARTICLES FROM 2008 SEASON

The 2008 Nebraska State Softball Tournament will be held at the Bill Smith Complex in Hastings. The Bill Smith Softball Complex is located east of Wal-Mart on the Tom Osborne Expressway - directly east of U.S. Highway 281 in Hastings, Nebraska. Highway 281 connects to Interstate 80 less than 15 miles north of the complex.

Admission Prices: Single Session--Admission prices are $7.00 for adults, $5.00 for students. All-Day In/Out Pass--$9.00 for adults, $7.00 for students. A single-session ticket allows admission for the entire day for people who remain in the facility. However, there is no re-entry for spectators leaving the facility. Spectators who leave the facility will be required to purchase another ticket. The All-Day In/Out Pass allows re-entry for those who leave the facility and wish to return later that day.

The 2008 Softball District C-2 Tournament is scheduled for October 8-9 at D.C. West High School in Valley. Wahoo High School enters the tournament rated #3, and will debut in game 2 at 10:00 a.m. on October 8.

The Warrior softball team came home with a first place finish from the Plattsmouth Invite on September 20.

In game one the Warriors defeated Ft. Calhoun/Roncalli 11-2 in 5 innings. Shelby Partridge got the win on the mound, striking out 5. Mattie Murren, Jordan Hinrichs, and Taylor Flessner led the way in hitting going 1-2.

In game two the girls defeated Conestoga 11-1 in 4 innings. Aubrey Voboril took the win on the mound. Sarah Chvatal, Mattie Murren, and Aubrey Voboril all went 1-1 at the plate, and Mallory Shanahan led the way going 2-2 with 2 RBI's.

In the championship game the Warriors upset class B number 5-ranked Seward. This was their first loss of the season. Wahoo won the game 1-0, scoring the game's only run in the top of the 7th inning. Sarah Chvatal led off the inning with a base hit, Mattie Murren had a sacrifice bunt to move her to two, and Aubrey Voboril had a base hit to score Sarah.

This tournament win put the Warriors at 11-2 on the season.

(posted 9/19/08) The Wahoo High School softball team is off to a fantastic start. They currently hold a record of 8-2 and are ranked 7th in the state.

They have key wins over Syracuse (4-2), Tekamah-Herman (5-1), and DC West (6-5). They look to continue the success this weekend at the Plattsmouth tournament.

Morgan Hancock leads the team in hitting with a .391 and Jordan Hinrichs is close behind with a .351 average. On the mound senior Shelby Partridge and freshman Aubrey Voboril share the duties. Shelby holds a 2.16 ERA and Aubrey has a 1.12 ERA.

Our next home game is Thursday, September 25 at 5:00 p.m. versus Conestoga. Come support the WHS softball team!