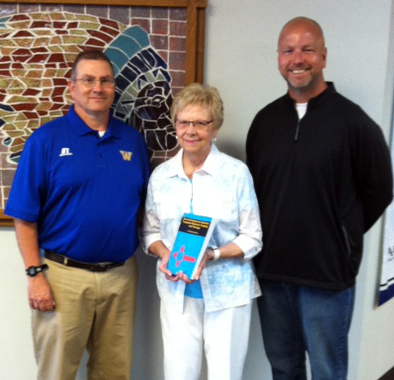 The Wahoo High School Science Department was given an inspiring gift on August 23.

Dr. Norenberg scrolled the following inscription on the front page: “With compliments and sincere appreciation for the teachers and staff at Wahoo High School. Go Warriors!!”

Dr. Norenberg’s mother Joan delivered the book to science instructors Clayton Tomjack and Steve Shannon on Friday. Both teachers are excited to share this gift with their science students. In addition, they will be working with Dr. Norenberg on scheduling a possible speaking opportunity in their classrooms.

The Wahoo High School staff and students extend a huge thank you to Joan and Dr. Norenberg for this incredible gift.

Jeffrey Paul Norenberg was born on November 10, 1962 in Wahoo, Nebraska, USA. He graduated from Wahoo High School in 1981. He then began studies leading to the Bachelor of Science in Life Sciences (Biology) at the University of Nebraska in 1986. In 1987 he entered the University of New Mexico where he completed the Bachelor of Science in Pharmacy in 1990 and Master of Science in Pharmaceutical Science (Radiopharmacy) in 1991. In 1990 and 1991, he also completed post-graduate training in nuclear pharmacy and PET radiochemistry at the National Institutes of Health in Bethesda, Maryland, USA while serving in the US Public Health Service. From 1991-1993, he served as a Radiology Lecturer and Director of Nuclear Pharmacy Services at Tufts School of Medicine and New England Medical Center Hospitals in Boston, Massachusetts.

Professor Norenberg's work in the discovery and development of radiopharmaceuticals for molecular imaging and therapy have resulted in more than 100 scholarly works and garnered over $13,000,000 in extramural funding for basic and translational research. He has been awarded two patents for novel leukocyte-associated antigen-1 (LFA-1) targeted ligands for molecular imaging and therapy.

Since 2002, he has also served as the Chairman and Executive Director of the National Association of Nuclear Pharmacies, a trade association representing 500 commercial nuclear pharmacies in the US.

Jeff is the husband of Renée-Claude Mercier and the proud father of Coralie (2003) and Sophia (2006).