Finally Friday! It has been a long but fantastic week in Washington, D.C. Students were given the opportunity to go out in pairs and groups to explore something or someplace in Washington D.C. that was of interest to them. Many students went across the Potomac River to explore historic Georgetown, as well as to get a glimpse of Georgetown University. Many others went back to the National Mall to explore the National Archives and other Smithsonian Museums that they had not had the opportunity to yet explore.

Mr. Royal and I went to the Capitol and had a chance to sit in the gallery in the U.S. House of Representatives and watch debate on the American Health Care Act. It was highly interesting to see a vigorous and at some points heated debate on this piece of legislation.

We then met students back at the hotel, and hopped on the Metro to Reagan National Airport to begin the journey home. I believe the general consensus among the kids was that Washington, D.C. is a special and exciting place to visit, but there is no place like Nebraska!

Thursday morning began with a short workshop for the kids before they were bussed over to the White House to participate in a White House study visit. Students, depending on what groups they were in, got to explore several of the neighborhoods of Washington D.C.

This was followed a study visit to the newly constructed Smithsonian of African American History and Culture. It is a powerful place to visit and learn about the struggles of slavery, the hope of emancipation, and the richness of African American culture.

Next on the agenda was a visit to Arlington National Cemetery, where students had the opportunity to walk around the cemetery and learn about the history of this solemn ground. One of the highlights was being able to view the Changing of the Guard ceremony. The students then headed back to the hotel for their final workshop, farewell dinner, and dance. 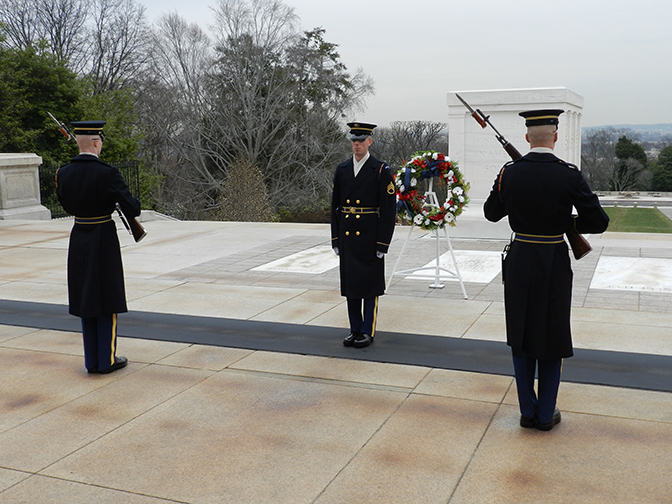 Close Up students viewed the solemn Changing of the Guard Ceremony at Arlington National Cemetery.

Wednesday began with a Metro ride over to the Capitol for Capitol Hill Day. We did manage to survive the cold and wind while waiting outside the Capitol to meet with U.S. Representative Jeff Fortenberry (R-NE).

Our next stop was the Library of Congress, where the kids had to opportunity to explore this absolutely beautiful building. We then headed over to the Russell Senate Office Building to meet with Nebraska U.S. Senators Deb Fischer and Ben Sasse. The students had just a few minutes to speak with our busy representatives and have their picture taken with them.

Students then had a little bit of down time after meeting with our representatives. Some of the students ventured out on Capitol Hill and had the chance to see Senator Bernie Sanders (D-VT) hold an impromptu rally about healthcare on the lawn just outside of the Capitol. We then went back to the Russell Senate Office Building, where our group was given a guided tour of the Capitol building by some of Senator Sasse's staffers. It was a great opportunity to see this awesome building and hear a little bit about its history.

Students then went over to Union Station for supper and then were bussed to the Kennedy Center to see the play "Shear Madness." The play is an audience interactive murder/mystery. There is a point during the play where the lights are brought back on and the audience gets to help the police investigators with details about the crime scene. The audience then votes as to who committed the murder and then the actors finish the play how the audience voted. A bunch of tired students then went back to the hotel for the night. Tuesday morning began very early for a few of our students as they have had some stomach issues. The Close Up medical staff was excellent in making sure our students got the medical attention they needed. It appears the culprit was food poisoning. Hopefully after a day of resting for these few students, they will be ready to roll tomorrow as we go to Capitol Hill.

As for today, students began the day with more study visits. This time they had the opportunity to explore the WWII, Korean, Vietnam & Lincoln Memorials. The next stop on the agenda was a study visit at the Smithsonian American History Museum. This amazing museum chronicles the history of America from our beginning to the present by exploring multiple aspects of our culture and society. It is a truly amazing museum!

The night concluded with a Congressional Simulation. Another busy day of learning and expanding horizons for the kids!

Students began their first full day on Close Up with study visits at the Jefferson, FDR, and MLK Memorials. Students had the opportunity to learn more in-depth about the meaning behind these memorials.

The kiddos then went back to the hotel to participate in sessions about current issues in public policy. Topics discussed were: college access & affordability, school bullying, the Pledge of Allegiance, youth voting, juvenile justice, and youth obesity. Just another busy, busy day in Washington, D.C.!

Sunday morning began with an exploration of the First Amendment at the Newseum, which is dedicated to freedom of press, speech, religion, assembly, and petition. Students had the opportunity to take a look at exhibits about 9/11 and see the tower that was atop the World Trade Center. There is also a portion of the Berlin Wall, a Pulitzer Prize photo gallery and many more items. 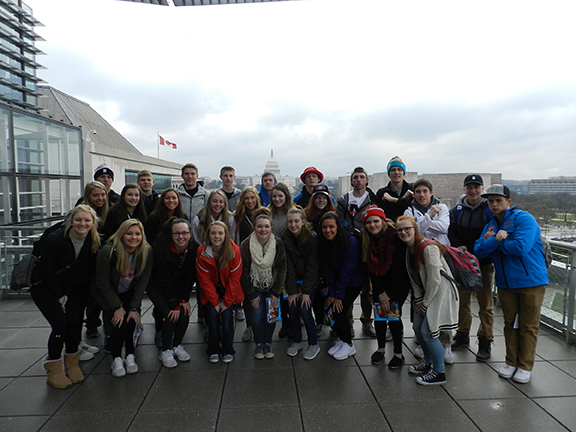 2017 WHS Close Up group atop of the Newseum in Washington, D.C.

We left the Newseum and grabbed a quick lunch from the many food trucks on the National Mall, and then proceeded to the United States Holocaust Memorial Museum. Students had the humbling experience to learn about the Holocaust through the many exhibits and artifacts.

When students were done at the USHMM, we headed back to the Holiday Inn, grabbed our bags and checked in at the Marriott across the street with the Close Up program. Students had a little down time to get settled into their rooms and meet the other two kids that they were staying with from other schools on the Close Up program. That was followed by dinner and an orientation. The students ended the night with with a domestic issue debate from conservative and liberal points of view. It sounded as though the debate got heated at times, but was also a good learning experience!

We got started early on Saturday at 6:45 a.m. and headed out on the Metro for the first time to the Waterfront district. We then we boarded the Spirit of Mt. Vernon and set sail on a lazy 1 1/2-hour cruise down the Potomac River to George Washington's home. We then disembarked and went on a guided tour of the Mt. Vernon mansion. The kids then had time to explore the other out buildings on the estate and the education center. A view of Mount Vernon (George Washington's home) from the student cruise down the Potomac River.

After returning from Mt. Vernon we then went to the National Mall and the kids had time to explore a Smithsonian museum of their choice. We then went to the Pentagon City Fashion Centre, where students had supper and an opportunity to do a little shopping before getting back to the hotel around 8:00 p.m.

The Close Up group took off for Washington, D.C., and we had a smooth two-hour flight into Ronald Reagan National Airport, only to be greeted by fire alarms going off in the airport. There seemed to be no problems, but it was not a lot of fun listening to screaming alarms for 30 minutes while waiting for our luggage.

We then got checked into our hotel, got some snacks and had a quick bite to eat. We then went on a guided night tour of many of Washington's major monuments: U.S. Air Force Memorial, Iwo Jima Memorial, the exterior of the U.S. Capitol and the White House, Jefferson Memorial, Martin Luther King, Jr. Memorial, Franklin D. Roosevelt Memorial, Lincoln Memorial, Korean War Memorial, and the Vietnam Veterans Memorial.

Twenty-seven very tired kiddos got back to the hotel a little after 11:00 p.m.