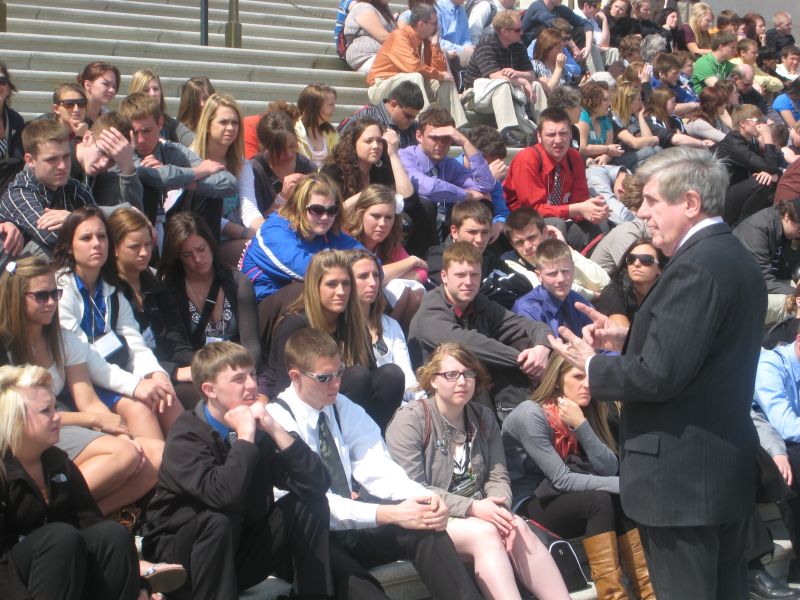 We left Omaha at 6:45 a.m. with a direct flight into Washington Reagan National Airport in D.C. Our first stop, however, was 40 miles north of D.C. in Baltimore, where students visited Fort McHenry, best known as the birthplace of the Star Spangled Banner in the War of 1812.

We had a really cool opportunity to take out a life size garrison flag (30' x 42') together as a group. We unfolded the flag together as a group and then held it up as our tour guide taught us and quizzed us about our national anthem, the flag, and our knowledge of U.S. history. We then traveled down to the inner harbor in Baltimore where students explored the many sites, interesting people, and shops. The weather was absolutely gorgeous today: mid 80's and lots of sunshine. 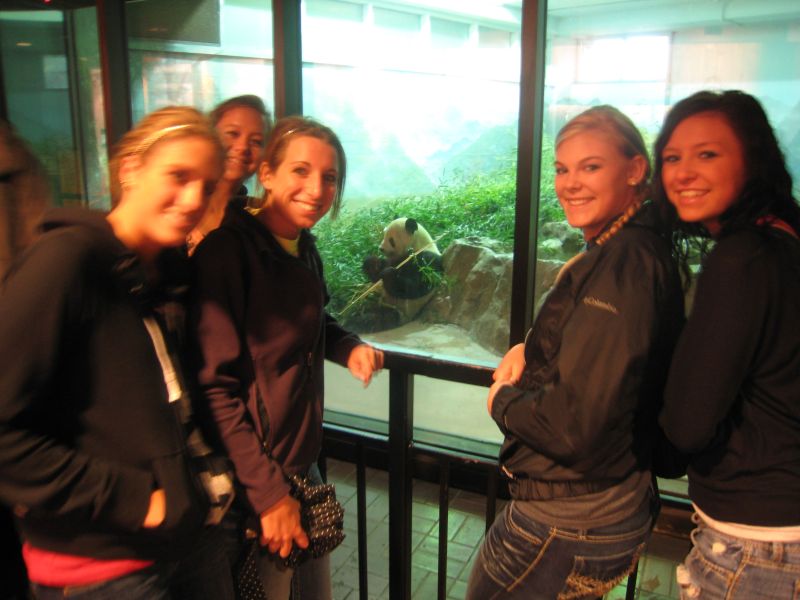 Early start this morning and a change in the weather. Rain most of the day and expected tomorrow as well.

Our first stop of the day was at George Washington's home, Mount Vernon. We toured our first president's mansion, saw his tomb, and explored the agricultural grounds. Students had lunch at Mount Vernon and then we headed to one of D.C.'s most popular spots (and recently damaged by the earthquake), the National Cathedral. Many students were awed by the beauty of the architecture in this massive cathedral.

Our final stop of the day was at the National Zoo, where we got to see their giant pandas munching on some bamboo, as well as the many other animals throughout the zoo's grounds. We had a pizza party at the hotel tonight and then spent the evening in Georgetown. I think we're all ready to get a good night's sleep again!

The weather began to lift a little bit today, just some mist and light drizzle, but that didn't stop us from walking through Arlington National Cemetery first thing in the morning.

We marched up to the Tomb of the Unknown Soldier, where students witnessed the very precise and solemn ceremony of the "Changing of the Guard." We then walked over to see the gravesite of John F. Kennedy and much of his family. Our last stop in Arlington was a long climb to the top of the cemetery up to Robert E. Lee's House for one of the most spectacular views of Washington D.C. Many students commented that Arlington has been their favorite part of their trip so far.

After Arlington we hopped on the metro over to the United States Holocaust Memorial Museum. This somber and powerful museum gave students a comprehensive look into the Holocaust from beginning to end.

This evening students checked into the Close Up program, had dinner, and enjoyed an awesome night time visit to the Iwo Jima Memorial. They have another busy day planned for tomorrow!

Sunny day today in D.C. but a little bit cooler. Today was the first full day of students on the Close Up program and they had a busy day. Their first stop of the day was at the Jefferson Memorial on the Tidal Basin, where they learned about our third president and author of the Declaration of Independence.

Students also got a good view of what is left of the cherry blossoms. From there students visited the memorial of FDR and the newly constructed Martin Luther King, Jr. Memorial.

In the afternoon students transferred to the White House for a study visit. This evening students participated in a domestic issues debate where they listened to and participated with a liberal and a conservative. Always a lively debate!

Today was another busy day for students on program.

After eating breakfast they headed off to see the war memorials on the national mall. These included: WWII, Korea, Vietnam, and the Lincoln Memorial.

In the afternoon they got a great walking tour of Capitol Hill to get acquainted with its geography, and then, depending on their workshop, got to visit the embassies of Turkey, Mexico, Czech Republic, or Saudi Arabia. A very unique experience!

This evening students participated in a simulation of how laws are made in Congress, using actual bills that are being debated on the Hill right now. Tomorrow is Capitol Hill Day where we will meet with our Nebraska representatives and hopefully check out some Supreme Court protests!

Today was Capitol Hill Day and wow was it an exciting one!

We started off our day with a guided tour of the U.S. Capitol Building. Students learned about the history of the building, much of the symbolism throughout the building, and saw the inside of the beautiful dome in the rotunda. 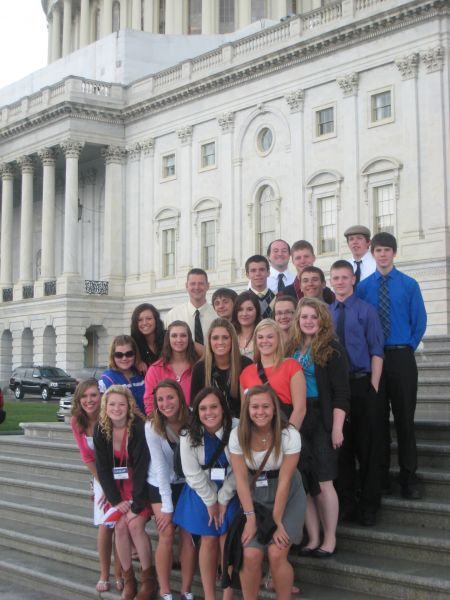 We then walked across to the Supreme Court and this is when it really got exciting. The Court is currently debating the health care law and there were protests galore in front of the building as well as countless media outlets. Some of our students even hopped in with the protesters!

We weren't sure if we would be able to get in to see the oral arguments, but we did!  We waited in line and were actually able to sit in the back of the courtroom and hear the nine judges grill one of the attorneys. It truly was a once-in-a-lifetime experience to be there during this historic case.

In the afternoon we met with Senators Mike Johanns and Ben Nelson and spent some time in the Library of Congress.

This evening we were treated to a show at Ford's Theatre called "1776." It was an awesome musical and drama/comedy about the month leading up to the signing of the Declaration of Independence.

It was a long and busy day, but an unforgettable one!

Today was our final full day in D.C.

We started off the day with a visit to the National Archives where students were able to see, in person, the actual Declaration of Independence, Constitution, and the Bill of Rights.

For the remainder of the day, students had independent study time where they visited Georgetown, Theodore Roosevelt Island, and the other Smithsonian museums.

Tonight students had their final workshop and concluded the week with a dance in the hotel ballroom.

We leave tomorrow at 11:00 a.m. and plan to be into Omaha by 1:00 p.m. It has been a great week and once again a wonderful, unique, unforgettable, and once-in-a-lifetime trip out to Washington!