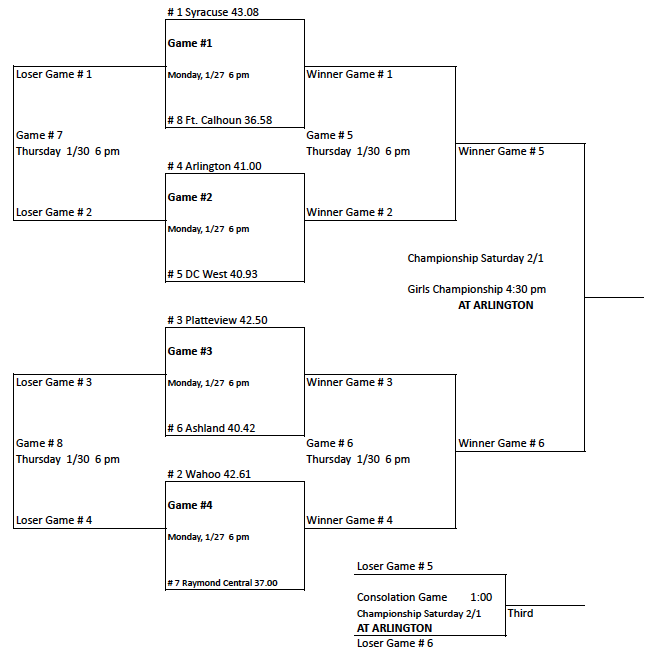 "It was a great night of highlights for our special senior Kendal Brigham, who honored her mother Kim with her #32 away jersey and flowers," commented Head Coach Linda Walker. The Wahoo Warriors came out focused against conference foe Raymond Central. Brigham led the way early, sinking the first 7 points for Wahoo, and ending with a game high of 23. The Warriors played well and controlled the game from start to finish. Toni Greenfield capped 9 rebounds, 6 steals, and put the Warriors into transition many times, while accounting for 5 assists. Wahoo’s squad of 12 took care of business in the half court and took a 58-13 victory. Wahoo will face Raymond Central once more in the first round of Conference, Monday night. 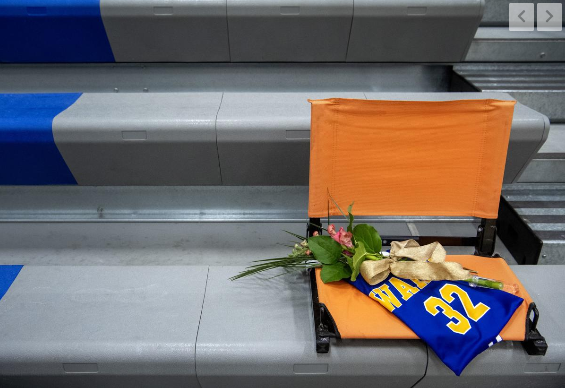 With basketball and a front-row seat, Kendal Brigham finds ways to carry on her mother's memory
by Clark Grell, Lincoln Journal-Star, Jan. 22, 2020

The Wahoo Warriors ended a perfect week of competition with a 51-22 victory over D.C. West Saturday. The Warriors' defense forced 8 of 20 game turnovers and led to a dominating first quarter, 18-1. Wahoo took a comfortable 30-7 lead at half time, and continued in full force with all players seeking floor time in the second half. The Warriors shot the ball well from the arch, hitting 8 of 16 for the game, while limiting D.C. West opportunities. Wahoo moved to 9-4 on the season.

The Wahoo Warriors took down the Platteview Trojans 47-31. It was a great night for the Warriors, who set the stage early with a 13-6 first-quarter performance. Wahoo kept the lead despite Platteview's 11-0 run in the second period, and entered halftime up 24-21. Kharissa Eddie put the Warriors into motion with an offensive rebound put back. Wahoo built a 7-point lead by the end of the third, and limited the Trojans' opportunities with solid defense. A strong 15-6 fourth quarter team performance guaranteed the Warrior victory.

Wahoo trailed early against the Mercy Monarchs to start the game on their home court. A timeout turned the Warrior switch on, forcing 12 of 32 game turnovers and a 20-14 lead. Wahoo never again trailed; however, inconsistent team play caused rhythm issues throughout the game, and allowed the Monarchs to keep swarming until the end. Wahoo took the win 46-35, and moved to 7-4 for the season

The Wahoo Warriors took the #1 Crete Cardinals into O.T. and almost pulled off what would of been a huge victory! Wahoo's defensive game plan was key to the disruptions of the Cardinals' deadly shooter, Morgan Maly. Five foot-four Kendal Brigham took charge of defending the D-1 6’ Creighton recruit, while the other Warriors helped defend and shine in the diamond. Wahoo led at halftime 18-17 and came out 3rd quarter with the same intensity. Crete outscored Wahoo in the third, 12-11, and tied the game up 29-29. Wahoo held strong in the fourth. It was Autumn Iversen’s defensive rebound that led to a coast-to-coast layup, followed by an offensive rebound put back that guaranteed the overtime. Despite the outcome of the game, Wahoo showed poise and toughness against a very good team.

Wahoo faced a disappointing loss to start the new year to Lincoln Lutheran. Too little on the scoring end, turnovers and defensive breakdowns put the Warriors in jeopardy. Wahoo trailed at halftime by 4, 15-19; however, a terrible third quarter did them in, falling to a 15-point deficit, 17- 32. Wahoo finally awoke in the fourth and found their intensity, sinking 6 three pointers. The comeback, though, was too late in the game to avenge the damage that was created in the third, and Wahoo dropped to 6-3. 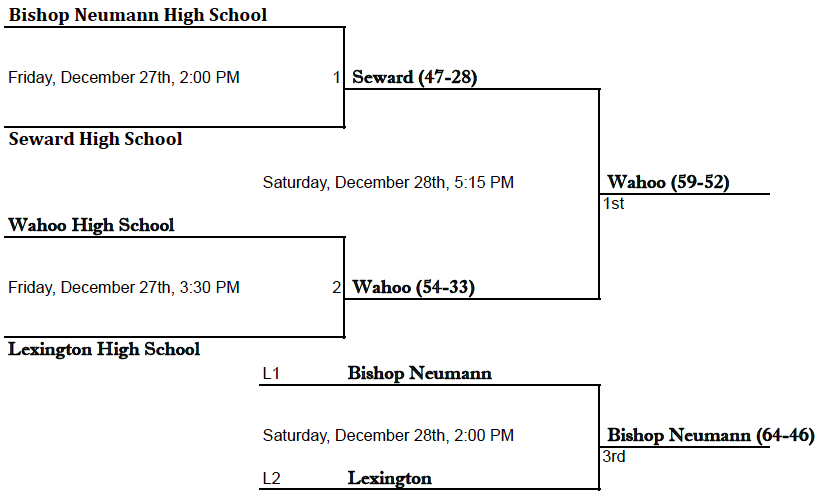 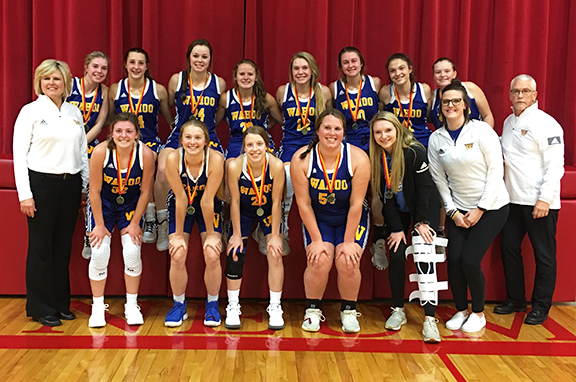 Wahoo's overall offensive performance, rebounding and tenacity sealed a 59-52 victory over the Seward Bluejays in the Wahoo Holiday Tournament held at Bishop Neumann. After a slow start, Wahoo generated a 16-10 second quarter performance, giving them a 25-22 advantage heading into halftime. The close battle continued as Seward held a slim 40-39 lead heading into the final period. Kendal Brigham stroked her third three early in the quarter to put it back into Wahoo’s hands. Several key Warrior steals produced layups, while Kelsie Sears' success in the paint was a key factor against their zone defense. Seward never stopped firing the three; however, the Warriors took control and never looked back. Wahoo wins the holiday tournament and ends 2019 on a great win!

The Warriors came out of the five-day break with a lot of good energy, and took a 36-19 halftime lead over the Lexington Minutemaids. Several dribble drives and scores by Toni Greenfield set the pace early for Wahoo, finishing with a 54-33 victory and moving onto the championship game against the Seward Bluejays.

The Wahoo Warriors marched to a 21-5 first quarter performance against the Fort Calhoun Pioneers. Fort Calhoun outscored Wahoo in the second quarter due to fouls, missed shots and not taking care of the ball. A regrouped Warrior team came out the second half and took care of business. Even though the Pioneers capitalized on 17 of 20 free throws, Wahoo’s 52% F.G. shooting and defense sealed their fourth win. Wahoo heads into the holiday season 4-2, and will take on the Lexington Minutemen in the first round of the Holiday Tournament.

The Wahoo Warriors put together one tough fourth quarter against the Louisville Lions Tuesday night. Wahoo held a 10-8 lead after the first quarter, but entered halftime down 22-19. The goal for a solid third quarter never came, and the Lions took to a 32-23 lead entering the final period. Wahoo fell further behind with 6:20 to go, trailing by 11. The belief for a victory was inspired by a Taylor Luben three, followed by two steals by Kharissa Eddie and four perfect free throws cashed in by Kendal Brigham. Wahoo found what it took and their 'all in' tenacious defense was the key. With 18.2 seconds on the clock, Wahoo came down and ran a last second set to perfection and roared to an awesome 41-40 victory!

Wahoo Warriors suffered their second loss of the season to the Wayne Blue Devils, 44-47. The Warriors  held a one-point lead at halftime, 26-25. It became a back-and-forth battle throughout the second half as Wayne capitalized on transition points, ending the third period down 40-42. Low scoring by both teams took place in the fourth as Wahoo controlled the clock, and took a one-point lead with two minutes to go. Wahoo had multiple opportunities throughout the fourth to seal the win; however, turnovers, missed one and one’s, and fouls would cast away their chance with seconds to go.

The Warriors and Bluejays battled it out until the bitter end Tuesday night on Wahoo’s home court. After eight minutes of play, Wahoo led 14-6. Ashland stayed in close range by acting on 2nd opportunities and striking the three. Wahoo continued to played in spurts and kept the lead after three quarters, 28-24. The final minutes became intense for both teams. Wahoo turned to a their full court man and was lucky to land an overtime. Relentlessly, the Warriors dug deep and grit played a huge part in the final four minutes. Wahoo's defensive stops, finished baskets, and perfect free throws helped Wahoo land an OT victory, 43-38. 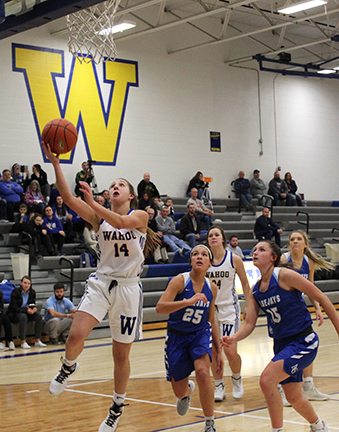 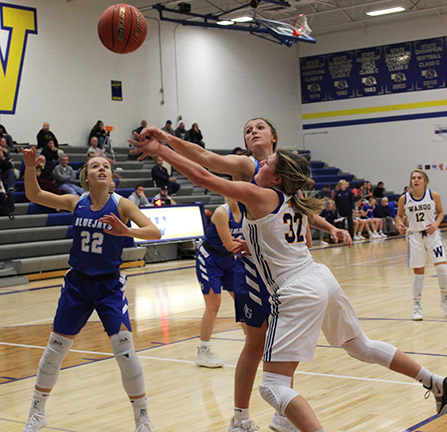 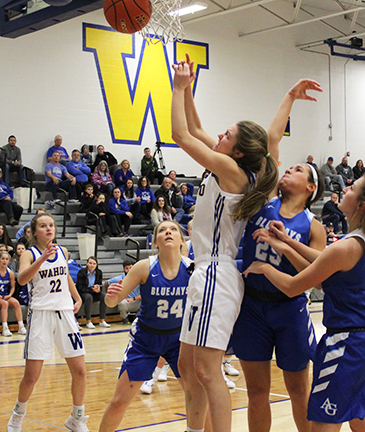 After three games in five days, the Wahoo Warriors took their first on-the-road regular season victory over the Aurora Huskies. Wahoo stretched the lead to 11 early in the second quarter; however, the Huskies prowled and closed the gap before half. It became a back-and-forth battle in the second half, ending the third up by 1. Wahoo’s man-to-man defense, focus on details, and finishing at the line boosted them to their first season victory, 40-37.

The Wahoo Warriors opened with a tremendous first half performance against Bennington, 40-37, but unfortunately, the second half didn’t mirror the first. The Badgers slowed the game by going to zone, but revved it up with lights out from beyond the arc in the third quarter. The Warriors didn’t have enough mojo to sustain the shift in momentum, and fell to a 68-53 opening loss. 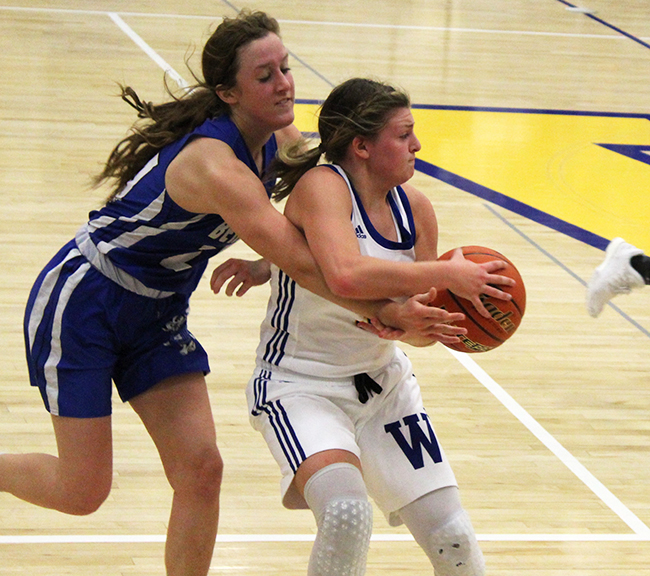 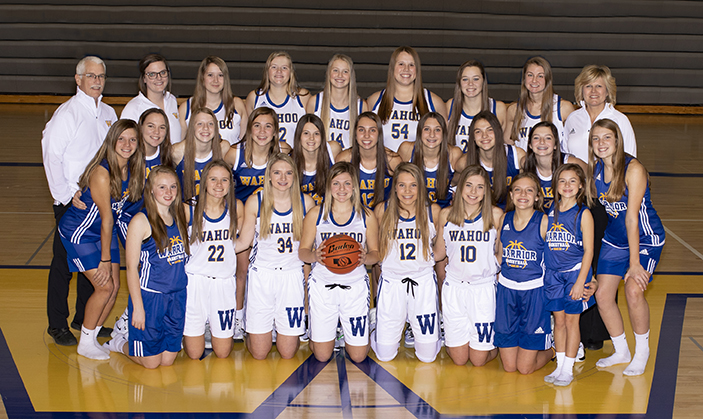 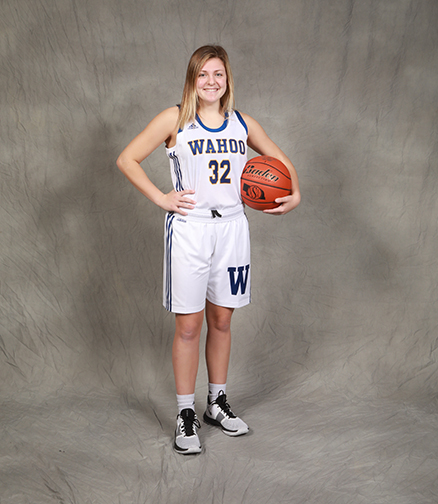