Tomjack recently won the local Geography Bee, and then took a qualifying test in an attempt to qualify for the State Bee. As a state qualifier, Tomjack is among the topp 100 scorers from across Nebraska!

The Nebraska State Bee will be held on Friday, April 1, 2016 in the Strauss Performing Arts Center on the campus of the University of Nebraska at Omaha.

One champion from each state and territory will advance to the national competition, which will be held May 22-25 at the National Geographic Society headquarters in Washinton, D.C. Transportation and accommodations for the Washington, D.C. trip are provided for each state champion.

WMS has had four state qualifiers in the past 12 years, but none have yet advanced to the national level. This could be the year!

For the third year in a row, Wahoo Middle School captured the top award at the science fair held March 25 at the Strategic Air and Space Museum in Ashland, NE.   This year's top honors went to 8th graders Ronnie Brust . . . 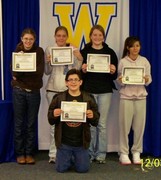 Hancock to attend May 9 Banquet at Devaney Center in Lincoln

Wahoo Middle School is proud to announce that eighth grader Sydney Hancock has been selected as its representative for the 2008 Breakfast for Champions Award. The Breakfast of Champions award is given to a male or female eighth grade . . .

On March 7, a group of 20 middle school students, along with their parents and teachers, braved the cold weather to travel to the Strategic Air and Space Museum in Ashland for the 2008 Science Fair. These hard-working students had the . . .