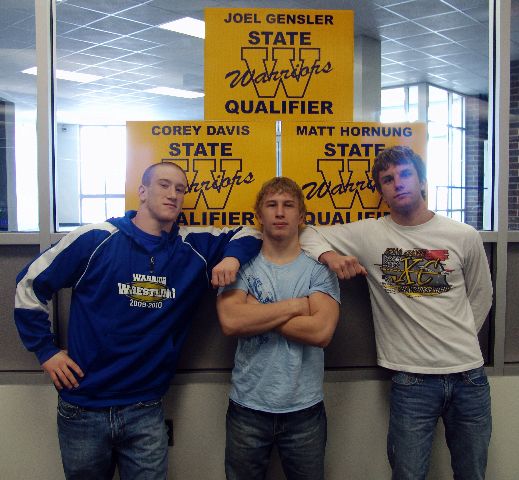 Warrior Wrestling wrapped up the 2009-2010 season at the State Wrestling Tournament on Saturday, February 20.

Representing the Warriors were junior Joel Gensler at 140 pounds and seniors Matt Hornung at 152 and Corey Davis at 171.

It was a hard fought tournament for all three participants as Gensler and Hornung both dropped their first two matches, finishing up on Friday morning. They both had tough matches to open the tournament, as Gensler lost a close 6-7 match to Nick Buchta from Omaha Gross, and Hornung gave Hastings Adam Central’s Jake Johnson a scare putting him in a pinning position before getting caught and pinned himself.

The first round consolation matches didn’t go the Warriors’ way either, as Gensler fell to Hastings’ Matt Baker in a 2-15 decision in a match that was much closer than the score would show. Hornung’s final match was a heart breaker as he was on the short end of a 4-6 decision to Waverly’s Jordan Rathe.

Senior Corey Davis ended his high school wrestling career in the medal round at State with a 9-3 victory over 4th ranked AJ Parsons of Schuyler to earn 5th place. Davis fought his way to the Semifinals Friday night by defeating Alliance’s Pedro Monroy 10-7, and then 5th ranked Brady Miller of York 3-1. In the Semifinal match, Davis would fall to the eventual State Champion Will Brown of Chadron, and then Tanner Hawks of Kennesaw/ Shelton in the consolation Semifinals to get in the medal match for 5th and 6th where he defeated Parsons.

“I am very proud of Corey. He fought extremely hard over the last four years to get to where he is. He has continually been the toughest and hardest worker we have in the room and it showed this weekend,” said Head Coach Darold Foster.

CONGRATULATIONS TO COREY DAVIS, JOEL GENSLER AND MATT HORNUNG FOR QUALIFYING FOR THE 2010 STATE WRESTLING TOURNAMENT! THE STATE TOURNAMENT WILL BE THURSDAY-SATURDAY, FEB. 18-20 AT THE QWEST CENTER IN OMAHA. PLEASE CLICK HERE TO VIEW THE TOURNAMENT TIME SCHEDULE.

The Warrior wrestling team competed Friday and Saturday in Schuyler at the B-2 District tournament.

Wahoo finished 6th out of 12 teams, accumulating 65.5 points with one district champion and two others finishing in the top four to earn their trip to State.

Corey Davis finished the weekend with a 4-0 record as he defeated the 3rd ranked A.J. Parsons of Schuyler 6-5 in the 171 lb. district finals match.

Joining Davis in Omaha for the second year in a row is senior Matt Hornung, who finished 4th in the 152 weight bracket, losing 6-1 to Schuyler’s Josh Papa.  Making his first appearance in the State Tournament is Joel Gensler, who fought through a very tough bracket defeating the 4th ranked Dane Hansen of Omaha Roncalli 8-3 in the consolation semi-finals to earn his ticket to state. Gensler then lost to Bennington’s Aaron Hovey for third place by fall.

It was a close dual throughout the night as it came down to the last match of the night at 135. Going into the final bout, the Cavaliers lead with a 33-28 team score, meaning that the Warrior’s Schyler Shanahan would have to pin Neumann’s Andre Mytty to pull out the team victory.

After coming close twice, Shanahan finally sealed the victory with just less than 3 minutes left in the match.

“I was very happy to see some of our younger guys step up and help us get the win tonight,” said Head Coach Darold Foster. “We had a couple of disappointing losses in the dual, but when it came down to it John Hollman filling in at 130 and Schyler at 135, really stepped up and sealed the deal.”

This ends the Warriors’ regular season as they prepare for the District tournament next weekend 2/12 &213 at Schuyler High School. They will compete for a chance to go to Omaha for the State tournament February 18-20.

"We wrestled well, going 5-3 in matches wrestled. Unfortunately, Yutan had a few more guys than we did. I thought our guys wrestled well," said Head Coach Darold Foster. "I was impressed with some of our younger guys who were filling in for 3 of our missing varsity wrestlers. John Hollman, Alex Talbot and Kyle Zeleny filled in well and gave us a chance of winning the dual. We just came up a little short."

The Wahoo-Cedar Bluffs wrestling team had a busy weekend traveling to Syracuse for a tournament Friday night, January 15, before heading to Waverly for a six team Tournament on Saturday, January 16.

They finished 5th out of 10 teams in the Syracuse pin tournament where the team scoring was kept by earning points for pins. The Warriors had 4 placers with two champions and three 3rd place finishers in the tournament.

The Warrior wrestlers were led by senior Zach Roumph and junior Joel Gensler. Roumph won the 215 division while recording 3 falls, followed by Gensler who won the 140 pound weight class while scoring team points with one pin and a forfeit.

“The team wrestled well. We finished very strong, which is something we have been working on,” commented Head Coach Darold Foster. “I was very impressed with the guys in this tournament. They were very determined to wrestle well.”

On Saturday the team traveled to Waverly, where they squared off against Waverly, Plattsmouth, Norris, Blair and Plattview.

The Warriors finished the day 1-4, earning their only dual win in a close 34-32 match. Only being able to fill 8 of the 14 weight classes, the team went in with the goal of winning the majority of matches wrestled in each dual.

“We were able to reach that goal in 3 of the 5 duals. We had some very good individual performances,” Foster added.

Joel Gensler went 5-0 on the day and was voted the tournament’s outstanding wrestler. Corey Davis finished 4-1, earning 3 pins, followed by Zach Roumph who went 3-2 on the day.

Westside beat Wahoo 53-12. Wahoo Wrestlers walked away with 2 pins. Zach Roumph took the first pin in 3:51. Joel Gensler stole the second pin of the night in 4:20, but that was after Gensler decided to rack up the takedowns gaining six before he pinned Kyle Thomsen of Westside in the third period.

Corey Davis also was putting up a good fight in his match against Casey Poprocki of Westside, but unfortunately Poprocki took the win with a takedown in the last period, putting him up 10 to 9 at the final buzzer.

On December 12, the Wahoo/Cedar Bluffs Wrestling team put everything on the mat, taking 4th place in the West Point/Beemer Invitational.

Six out of the eight wrestlers medaled at the event. Joel Gensler (140) and Corey Davis (171) both took 1st place and both went 3-0. David defeated Tyler Johnson of West Point/Beemer with a technical fall 17-2. Davis triumphed over Zach Neuhalfen of Pierce by pinning him in 3:54.

Colter Mattson (215) put up a good fight in the championship round against John Tranmer of Blair, but came up a little short. Still, he walked away with a second place medal and a record of 2-1 for the day.

“I was very happy with the way we finished today. We did not have any let ups that can haunt you in tournaments,” said Head Coach Darold Foster.

The WHS Jr. Varsity wrestlers finished the day with 12 pins, 1 major decision and 2 decisions. John Hollman had 1 pin, 1 minor decision and 1 major decision, putting his record at 3-0. Hollman also left the tournament with 2nd place under his belt. Alex Talbott went 2-1. Gaddy Zeleny went 1-2 with a pin against Brent Urban. Zach Jansa walked away with 2-1 as his record. Dakota Caniglia’s record was 2-1 for the day, along with Tyler Urban, who also left with a 2-1 record. Jason Semrad left with his record as 2-1. 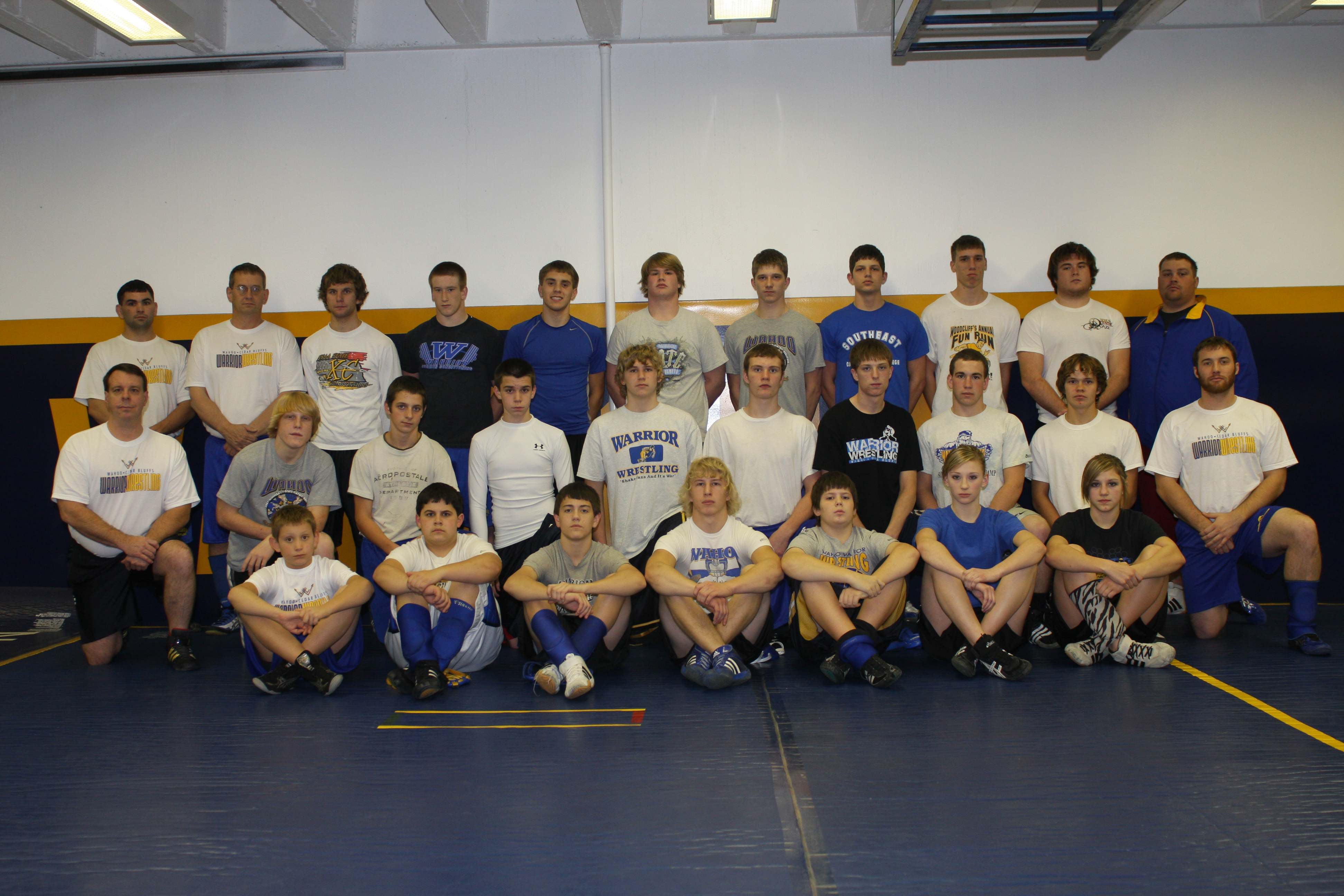