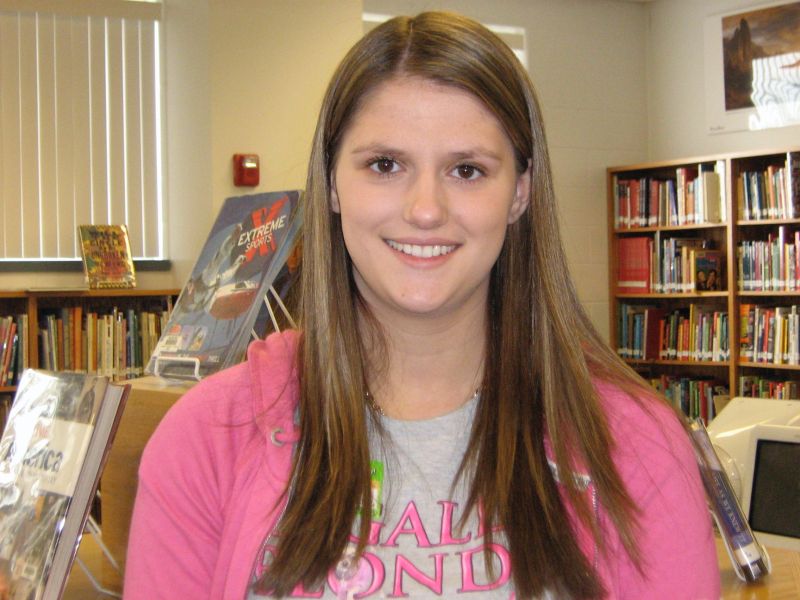 Speaking out for what you believe is always worthwhile!

Overcoming the butterflies in her stomach, WHS sophomore Emma Bartek joined other members of Project Extra Mile in personally addressing members of the Nebraska Legislature's Judiciary Committee at the state capitol, chaired by Senator Brad Ashford, at a March 19 hearing over LB258, a proposed bill that will strengthen penalties for minor in possession violations.

Bartek enthusiastically expressed her support for the so-called "Use and Lose" law, which will include a minimum 60-90 day driver's license suspension for a 1st offense MIP. The suspension increases significantly for further offenses (as listed below). The bill was introduced by District 48 Senator John Harms (Scottsbluff).

"Walking down the halls at school on Monday morning, you tend to hear some interesting things. A common topic of conversation is about who had the big party, who was there and if the party was busted. Then you hear who got mipped. To teenagers this is funny and entertaining, because a vast majority of these kids get in little trouble. With the new bill, LB258, things would change for the kids who receive these MIP's. It might not be so funny anymore.

"When I first heard about this new bill, I was very excited. I was glad to hear something more was going to be done to help combat underage drinking. There should be more repercussions for teenagers who choose to drink. Teenagers love to drive . . . I love to drive. It gives most a sense of freedom. But by drinking they would be putting their freedom in jeopardy. So for most, if there was chance that they would get their license taken away because of drinking, they would think twice about drinking for sure. And they would think even harder before they get in a car and drink. LB258 would be a very powerful deterrent. After all, driving is a privilege, not a right!

"In 2007, 56 teenagers between the ages of 15-19 were killed in car crashes in Nebraska. Out of these 56, 19 were alcohol-related. This number is way too high in general, but the number of deaths that involve alcohol should be way less or even non-existent. LB258, over time, could help curb this rate. It could help save lives. With this bill teens would suffer more consequences when they drink and when they drink and drive. Having lost their license to a prior MIP, teenagers will first of all not be driving and maybe they will think twice before drinking at all. And for those who have not received a MIP, this new bill would be a great deterrent when deciding if they should drink or not.

"In order to help save lives, this bill needs to be passed. You have a chance to help influence lives of teens. My friends and I are just as affected by all of this underage drinking. It is hard to deal with all the time. It seems to be more accepted for teenagers. But that needs to stop now. Sometimes teenagers need to know there will be repercussions for their underage drinking, even if their parents don't punish them. I am sick of kids just laughing off their MIP's like it's not a big deal. It IS a big deal! On Monday mornings to come, I hope there is different talk in the halls. Maybe the talk could be how there were no big parties or how they don't have a license now because of the poor decisions they made. So I respectfully ask you all that you pass LB258. It could help save teenagers' lives."

Guidance Counselor Ann Egr and Media Specialist Dave Privett were attending a workshop a few blocks from the Capitol, and were able to attend the session in support of Bartek.

"I sat with a nervous stomach as I had never been to a legislative session. It was so empowering to see these young people taking a stand on such a charged topic," Egr stated. "I was so proud of Emma. It takes an unbelievable amount of courage and self confidence to publicly proclaim your beliefs. I admire Emma and all of the other young adults for taking this stand."

Those who spoke in support immediately reaped the rewards of their efforts. The Judiciary Committee has now designated LB258 as a Priority Bill for the next legislative session! Way to go Emma for taking a stand!

The following is the Statement of Intent, written by Senator Harms to introduce the bill:

Underage drinking is a serious problem in Nebraska. One major reason it is such a problem is that there are no consequences for violating the state's minor in possession law which truly affect a teenager. Because we have such a weak law in this area, Nebraskans have fostered a culture of binge drinking among teenagers. It is a badge of honor to get caught drinking, pay the fine, and get on with their lives. But sometimes, teens pay the ultimate price for this behavior, they lose their lives.

"Use and Lose" laws, which take away a teen's driving privileges for violating minor in possession laws, have been shown to be effective in curbing this behavior in states where they have been passed. Driving is a privilege, one that teens highly value, and the possibility of losing it causes them to think about the consequences of their drinking behavior.

LB258 would stiffen the penalties for teens who are caught violating our underage drinking law. The new penalties would be as follows:

2) For persons under 16 years of age who have an operator's permit:

3) For persons under 16 years of age who do not have an operator's permit: