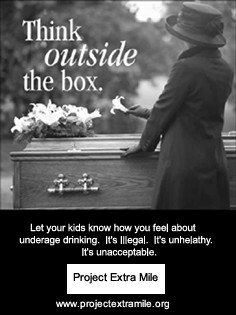 A nonprofit agency designed to curb under-age drinking is trying a different approach.

The move is a different approach for the group, who had been organizing coalition groups of youths in each county independently of any established setting like a school or church. The old system is successful in Omaha, but hasn’t been as successful in outlying areas.

"We thought it could be better to take the coalition to where the youth are - in school - and have them meet over a lunch period twice a month. We thought setting specific times each month would allow much youth to participate."

The group will meet at noon the first and third Tuesdays each month at Wahoo High School.

"The principal - Chris Arent - offered to have them there as soon as we approached the idea," Bassett said.

While the overall goal of Project Extra Mile is to keep youth from drinking alcoholic beverages, Bassett said the objective really needs input from the youth.

"It’s important to have youth involved on an issue that impacts youth. They have the ability to tell us exactly where the holes and gaps are in the communities in a very blunt and obvious way."

The Wahoo High School principal said he believes it is important to bring a social-issue-based organization into the school.

"We didn’t have a group like that," Arent said. "We had typical school groups, but we didn’t really have a student organization that looked at social issues. I feel that this is an opportunity to expose our students to some of those social issues."

Arent said one of his goals at the school is to introduce students to organizations like that.

"I think this important for a couple of reasons," he said. "Multiple research studies show the earlier the alcohol use the greater the chance for people to have problems with that later in life whether through abuse or criminal activities. Getting to those issues sooner gives students a better chance to get through high school and into the community as adults. Nebraska ranks very high in student alcohol use. People need to know that."

Bassett said this is an issue that will take time to change.

"This is something that will take long sustainable change in our society," she said. "It’s going to take time to get there. That’s one of the things that students have trouble with. We tell them that this takes patience. They won’t see dramatic change overnight. Any small step is a step forward.

"Under-aged drinking is the No. 1 killer of our youth," she said. "This is a big problem. More youth are dying from alcohol-related incidents than from all the illegal drugs combined. That’s pretty startling."

Anytime a youth dies or is injured from drinking alcoholic beverages there is an adult responsible, she said.

Bassett said she is pleased with the response of the Saunders County coalition group in Wahoo. So much so, that she is working for a similar approach in Dodge and Washington counties, but schools for those coalition youth groups have not yet been finalized.