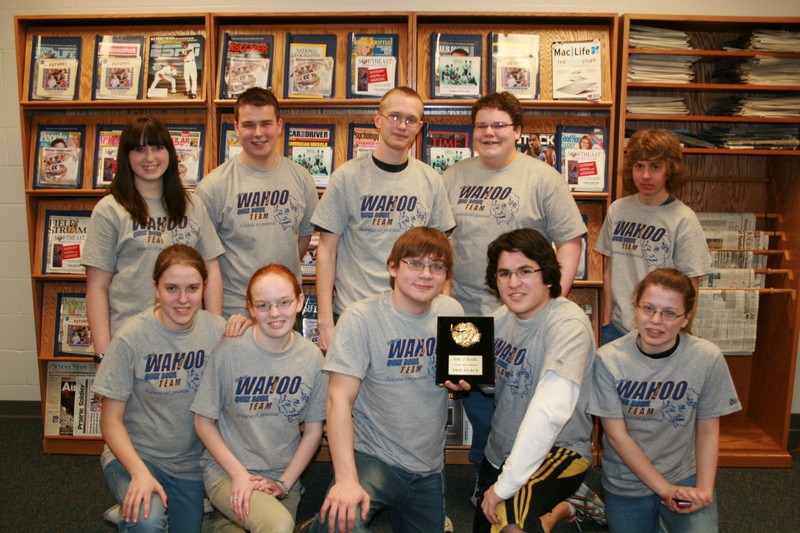 The synthesized sound of mechanical buzzers emanated from the Wahoo High School Commons Area on Monday, March 3. Five quiz bowl teams from the ESU2 South Division met at Wahoo to compete. Among those vying for the title of ESU2 South Champion was Mead, Yutan, Dodge, and Wahoo.

The scores of the first rounds were low, and Yutan shut out Wahoo by two questions. In the next two matches, Wahoo played against Prague and Mead, narrowly pulling through both matches on top. The subsequent game saw a three-way tie between Yutan, Mead, and Wahoo after Wahoo beat Dodge. Each team had gone 3 and 1 for the tournament. In order to break the tie, an assessment was taken of the total points accrued throughout the evening. In this manner, Yutan took first over Mead and Wahoo by a slender margin.

The Quiz Bowl program enables students to pursue knowledge and trivia in a niche they find enjoyable and to compete in an academic atmosphere. Wahoo High School social studies instructor Ryan Mueller served for his second time as a moderator during the tourney. His responsibilities included posing the actual questions to the teams, as well as judging responses and team conduct.

“It is a great program,” said Mueller. “It’s a great opportunity for students to get together and compete and meet students from the other districts. It’s a fun and interactive way to learn.”

“I think it’s a good avenue for our students,” Arent said. “I personally enjoy the trivia format myself.”

Quiz Bowl is sponsored by Weldon and Paula Hoppe.