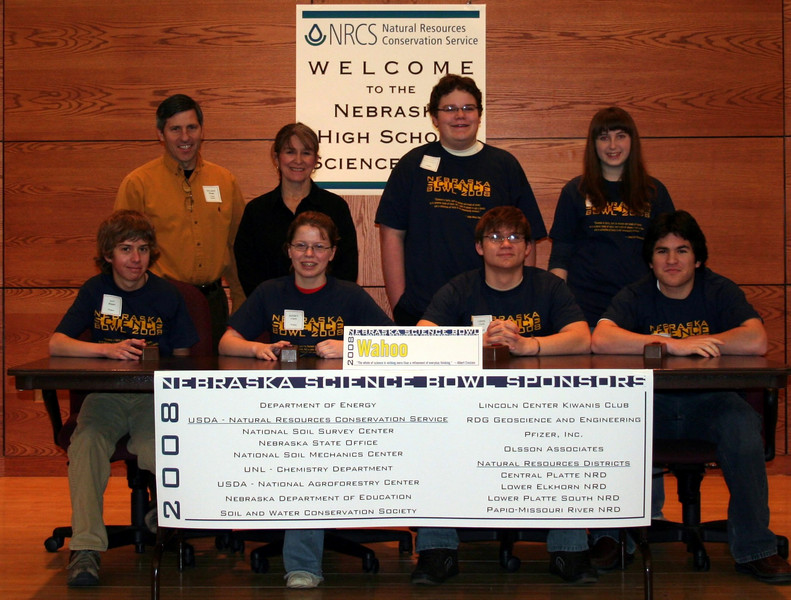 The morning portion of the contest was a round robin format, with the forty teams divided into four groups. In the first match, Wahoo led Centura at half-time by a sizeable lead but was beaten on the last question of the match, losing by two points. Next, Wahoo faced off against the defending champion team of Creighton Prep. The opponent jumped out to a large early lead thanks to the sharp answering of their captain. Wahoo's first points came from a penalty, when Creighton Prep buzzed in early and did not come up with the correct answer. Once on the scoreboard, Wahoo got into the match and made a respectable showing but could not overcome the large early deficit. The third and final match of the round robin was against Columbus where once again, the Warrior team led at half-time but was overtaken in the second half.

The top sixteen teams from the morning round robin brackets qualified for the afternoon double-elimination championship tournament. Most of these teams won all three of their morning matches. The remaining teams were given the opportunity to enter a consolation tournament, which the Wahoo team chose to do along with seven other teams. Starting out against Mt. Michael, Wahoo lost another close match, 24-20. Next, they matched up against Shelby and won their first contest of the day, 40-28. On a roll, Wahoo won their next match against Platteview, 30-12. They were eliminated in the next match when they lost to Millard South.

The next contest for the Wahoo team will be at home on March 3 at 7 p.m. when they will host Raymond Central, Mead, Yutan, Prague, Cedar Bluffs and Dodge. The winner will represent ESU2 at the Nebraska State ESU Quiz Bowl in Holdrege. Future contests include Bellevue University Invitational on March 7, Capitol Conference at Arlington on March 10 and the Nebraska Science Olympiad at UN-L East Campus on April 5.