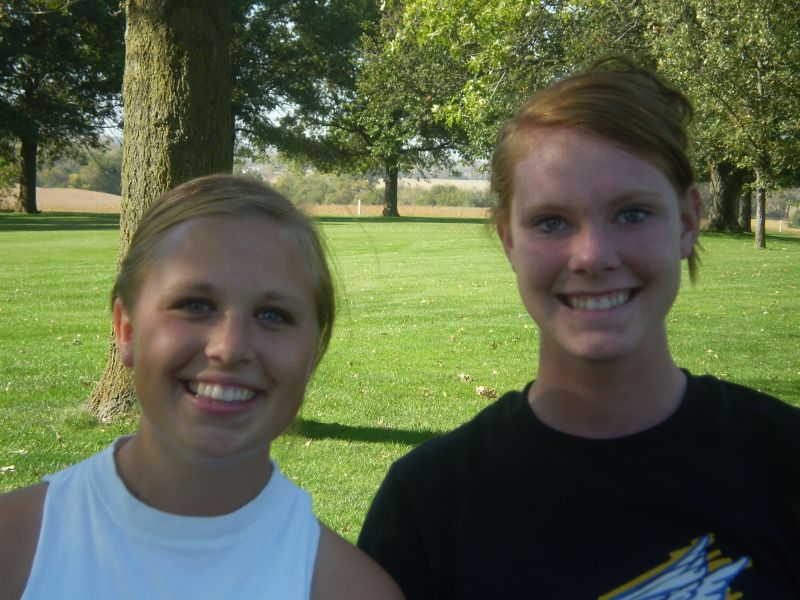 The Wahoo Girls Golf team wrapped up their season on Tuesday at the Girls State Golf Tournament played at Quail Run Golf Course in Columbus.

The Warriors were led by Junior Emma Harris’ 7th place finish. Harris followed up her day 1 score of 81 with an 89. She was able to overcome some sickness and gusty conditions to place in the top ten for the tenth time this season, and the 26th time in her career. That would be good for 2nd place all time behind Krista Hrdlicka.

Junior Nicole Pearson followed her day 1 score of 109 with another 109. Nicole’s round was highlighted by hitting her driver to about 40 yards out on the 302-yard 1st hole. She proceeded to par the hole. Pearson also played the par 3 on the back in only 1 over par.

“Nicole hit some really good shots. Unfortunately she couldn’t piece together a sold round. She hit her driver as well as she had all year on the tight course,” said Coach Curtis Carlson.

Pearson placed in the top ten four times on the season including three 5th place finishes. This gives her nine top fifteen finishes for her career. Nicole’s scoring average for the year finished at 106.1 per 18 holes.

“The girls both gained a lot of experience while having fun at state. Emma was able to place for the first time at state, which was a goal of hers. She was also able to place in every meet this year. Nicole also placed in the last 4 meets before state. Both girls have put themselves in position to have exciting senior seasons,” commented Coach Carlson. “I would also like to thank all the parents for their support throughout the season.”

The Wahoo Girls Golf team returned to action Monday at the Girls State Golf Tournament held at Quail Run Golf Course in Columbus. The Warriors' two qualifiers had to battle through some early morning sprinkles during their round. Junior Emma Harris had a good day on the links as she recorded an 81, which put her in 5th place heading into day 2. Harris hit 9 greens in regulation during her round but was unable to convert them into any birdies. Junior Nicole Pearson carded a 109. Pearson got off to a hot early start before running into a couple bad holes. “Both girls hit a lot of great shots. Unfortunately, both girls struggled with the speed of the greens. With the early morning showers it really slowed down the greens compared to our practice round on Friday.  I am excited to see how the girls finish the tournament off tomorrow,” said Coach Carlson.
Pearson’s tee time is for 11:06 a.m. off hole 10 and Harris’s tee time is for 11:22 a.m. off hole 1 for day 2. Good luck girls!

The Warriors were able to experience an extremely successful day on the links. Juniors Nicole Pearson and Emma Harris both placed in the top ten individually to qualify for the state tournament that will be played next Monday and Tuesday at Quail Run Golf Course in Columbus.

Freshman Rosie Welsh got her first taste of district action while shooting 147.

“I was very pleased with the scores that the girls were able to post. That being said, the girls left a lot of shots out on the course. For Emma to make 5 birdies in a round is very impressive. Nicole was able to overcome hitting her first two shots out of bounds on the day, which is never easy. She was able to hit some great approach shots with her irons that led to several scoring opportunities,” said Coach Curtis Carlson.

Wahoo- The girls golf team returned to action on Thursday at the Capitol Conference Golf Tournament. The team once again found success with placing two girls in the top 5.

Junior Emma Harris carded an 83, which was good for second place. The tournament was won by Stephanie Rodgers from Syracuse with a 76. Junior Nicole Pearson placed 5th with a 107. Pearson’s round was highlighted by a birdie on the always challenging, par 3 6th hole.

“I was pleased that we were able to place two girls in the top 5. I am looking forward to districts next Monday to see if we can continue this success,” said Coach Curtis Carlson.

*Thank you to the Wahoo ladies golf league for providing marshals for the tournament. The volunteers included Sue Klemme, Linda Iversen, Bonnie Swartz, Sandy Hudson, Janet Jonas, Ethel Hohl, Lou Otto, Jane Otto and Peg Jensen. A special thanks also goes out to Mary Horsham who made sure the girls and coaches were fed afterward and Chad Koranda for donating the golf carts for the marshals use during the tournament. I would also like to thank John Harris for all his work helping to make the tournament run smoothly.

Juniors Emma Harris and Nicole Pearson both placed for the Warriors. Harris took home the medalist honor with a 74 on the par 30 course. Pearson carded 93, which was good for 7th place.  Freshman Rosie Welsh continued to cut strokes off her score.

“The girls were forced to really focus on their short game. The greens are bowl shaped and small. The girls were able to perform still even with the challenge,” said Coach Carlson.

The Warriors finished out their busy stretch by playing in the Arlington Invite played at Fremont Golf Club.

The team was lead by Juniors Nicole Pearson and Emma Harris. Pearson finished in fifth place with a 113. Harris came in second place with a 95. Both girls struggled on the back side as the winds gusted up to the mid 40’s. Freshman Rosie Welsh continued to improve as she cut strokes off her previous tournament score.

“The girls were forced to handle high winds for the first time this season. You could tell the girls have had a busy 5 days with a couple tournaments, a duel, and homecoming. Placing two girls in the top 5 is always something to be happy with,” said Coach Carlson.

The Warriors will return to action next Monday at the Elmwood-Murdock Invitational played at Grandpa’s Woods Golf Course.

The girls returned to action on Friday at College Heights Golf Club in Crete.

The Wahoo Warriors Girls Golf team kicked off a busy 4-day weekend on Thursday night with a home duel against Plattsmouth.

The visitors won the duel 221 to 231. Individual medalist honors went to Emma Harris. Harris carded a 41 at Hilltop Country Club. Second place was 5 shots back. Her round was highlighted by a birdie on hole 3 after hitting her tee shot to a foot out. Junior Nicole Pearson had the third best score on the day with a 51. Rosie Welsh carded a 69. Katie Welsh added a 70 and Gaddy Zeleny shot a 72.

The Warriors were led by Emma Harris’ second place finish. The junior shot an 82, which was 3 shots behind the winner Stephanie Rodgers from Syracuse. The third place score was a 91.

Harris was able to hit 8 greens in regulation on her way to make 3 birdies during her round. Her score was a 9-shot improvement over the previous year.

“The girls played well on a very challenging course. The greens have a lot of slope so you rarely get a straight put. The short game is an area that we need to continue to work on and improve,” said Coach Curtis Carlson.

The Warriors were able to take advantage of a beautiful day, even after the winds picked up in the afternoon.

Junior Emma Harris took the medalist honors with an 84. She was able to take advantage of hitting 6 of the 7 fairways along with 5 greens in regulation to shoot a 38 on the front. Harris’s two over par 38 was the low 9 of her career in a tournament. She followed that up with a 46 on the back.

Harris had a couple three putts along with hitting into the water twice. Her 84 was eight shots better than the second place finisher.

Junior Nicole Pearson also took part and once again just missed placing. Pearson carded a 112, which was just 2 shots off from placing 10th. Pearson’s round was hindered by the par 5’s on the front. She took a nine on both par 5’s on the front on her way to a 54. She followed that up with a 58 on the back nine.

“Both Emma and Nicole had a good day. Both girls would also tell you that they should have gone lower. Both girls struggled with their short game, especially chipping,” said Coach Curtis Carlson.

On a warm, windy day the Wahoo Girls Golf team competed in the Seward Invitational played at Seward Country Club.

Junior Emma Harris led the way with an 86. This was good for a sixth place finish and was six shots out of the lead. Her round was hindered by hitting out of bounds both times she played the par 3 fifth hole.

Junior Nicole Pearson just missed medaling by one shot. She carded a 101 that was highlighted by paring 4 out of the 9 holes on the back nine. Junior Katie Welsh and Rosie Welsh each participated in their first varsity invitational as well.

“The girls competed well in a tournament that had a talented field. Any of the top six girls could have won the tournament on any given day. For the first time out playing 18 holes the results were about what I expected,” said Coach Curtis Carlson.

The Wahoo Girls’ Golf team kicked off its season at Hilltop Country Club competing in a duel with Schuyler.

Junior Emma Harris led the way taking the medalist honor with a 43. Her round consisted of 2 pars and 7 bogeys.

“For the first time out in competition this year the girls played about how I expected. Hilltop is a challenging course and the girls showed a lot of improvement during the round,” commented Coach Curtis Carlson. 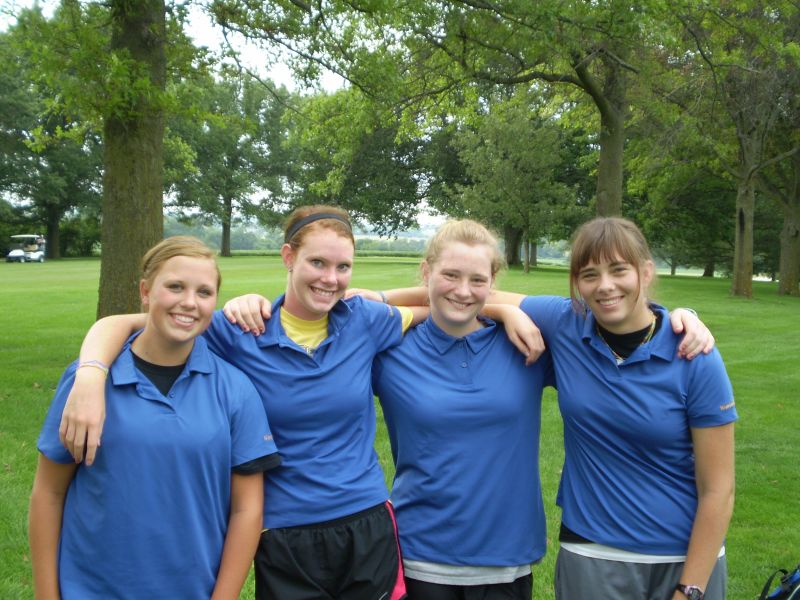