The WHS girls took the Capitol Conference Title on September 30! 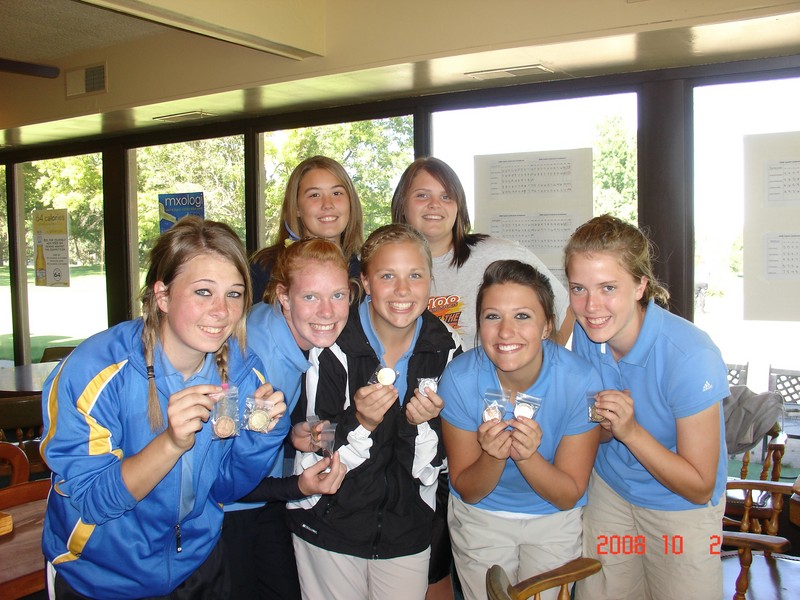 In windy and cold conditions freshman Emma Harris led the way carding a 99, which was good for 5th place. The 5th place finish qualified Harris for State.

“Emma played better than her score would indicate. Besides starting off with a 10 and finishing with a 9, she played some impressive golf,” said Head Coach Curtis Carlson.

Freshman Nicole Pearson carded a 120 and junior Ali Anderson recorded a 122. Also competing for the Warriors were junior Hillary Fick with a 132 and sophomore Tina Robinson with a 138. As a team the Warriors finished 7th out of 10 teams with a 479.

At State Emma Harris battled cold, wet, windy conditions to finish in a tie for 30th place. On day one, Harris hit her tee shots as well as she had all year. She struggled with her second shots, which led her recording a 102.

“She was hitting spots all day and was really getting her drives out there,” Carlson commented.

On day two she played in a steady rain and was able to still record a 103.

“She had the second lowest freshman total in the tournament, which was a great start for her career. It was an excellent learning experience that she will be able to build on for the future. We have made a goal for next year of having the team qualify for State. Hopefully with hard work we will be able to accomplish that goal,” said Carlson.

The Wahoo Girls’ Golf Team returned to action on Tuesday at the Capitol Conference Tournament played at Hilltop Country Club in Wahoo.

Wahoo used perfect weather and course conditions to run away with the team title, shooting a season best 421!

Syracuse was second with a 435. Individually, Syracuse’s Stephanie Rodgers took the medalist honor with an 82.

“To win conference and to have 4 girls place in the top 10 is amazing. The girls recorded their lowest team score of the year by 21 shots. That was really impressive because Hilltop Country Club is one of the toughest courses the girls have played this year,” said Wahoo Coach Curtis Carlson.

The Wahoo Girls’ Golf team returned to action on Wednesday, September 24, playing in the Arlington Invitational played at the Fremont Golf Club.

The Invite was originally scheduled for Monday, but was postponed due to the weather. The event was also switched from an 18-hole meet to a 9-hole meet.

The Warriors captured the team title, shooting a 240.

The team was led by a pair of freshmen in Emma Harris and Nicole Pearson. Both shot 54, which tied them for 2nd place. Also placing for Wahoo was Junior Ali Anderson, 8th with a 63, and Junior Rylea Meyer, 13th with a 69.

Also competing for the Warriors was Junior Hillary Fick with a 73.

“It was a great experience for these girls to win the Arlington Invitational. Hopefully we can build on this and continue to improve,” said Coach Curtis Carlson.

Also contributing were Freshman Nicole Pearson with 118, Junior Ali Anderson with a 125, and Junior Rylea Meyer with a 126.

“I was pleased that some of the girls were able to bounce back from slow starts. We shot our low team score for the year and had two girls place in the top 10, which is impressive since it is their first year of competitive golf,” said Coach Curtis Carlson.

The Wahoo girls’ golf team returned to action Thursday, September 18, competing in a duel with Plattsmouth at Hilltop Country Club.

Wahoo took the duel with a team score of 220 to Plattsmouth’s 236. Wahoo was led by junior Ali Anderson’s personal best 50, which was good for the low score of the day. Freshman Emma Harris backed up the 50 with a 55 for a second place finish. Wahoo also used sophomore Tina Robinson’s 56 and freshman Nicole Pearson’s 59.

“To have five girls with scores in the 50’s is very impressive considering how much golf some of the girls have played. The girls continue to work hard during practice and it is really starting to show in their scores,” said WHS Girls’ Golf Coach Curtis Carlson.

The weather couldn’t have been better as the Warriors recorded their best team score of the year with a 454, which was good for 6th place out of 10 teams.

The Warriors were led by freshman Emma Harris with a 102, sophomore Tina Robinson with a 107, junior Ali Anderson with a 116 and junior Rylea Meyer with a 129. All had their best rounds of the season. Junior Hillary Fick added a 140.

“I was really pleased since three of the girls played their best round of the season,” said coach Curtis Carlson.

The Wahoo Girls golf team capped off a busy week on the links with a sixth place finish out of 10 teams at the Plattsmouth Invitational played at Bay Hills Golf Course. The girls had to battle wet and stormy conditions that caused almost 2 hours in delays.

Freshman Emma Harris recorded a 99 while tying for sixth place. She was followed by Sophomore Tina Robinson with a 111, Junior Hillary Fick with a 127, Freshman Nicole Pearson with a 133, and Sophomore Tricia Stuchlik with a 137.

“The girls handled the weather really well. For many of the girls this was the first time they have had to play in those conditions,” said Coach Curtis Carlson.

On Tuesday the Warriors took part in the Beatrice Invitational, played at the Beatrice Country Club on a windy day. As a team the ladies finished fifth out of six teams. The field consisted of some of the top Class B teams in the state.

“The field was definitely the toughest we have seen so far this season. The Beatrice Country Club was also very challenging, especially with the wind,” Carlson added.

The busy week for the Warrior golf team got started Monday with a duel against Schuyler Central. The Warriors were able to win the duel with a 247. They were led by Harris with a 51 and Pearson with a 57. Fick carded a 69 and Anderson added a 70. Also, Tricia Stuchlik had a 75 and Rylea Meyer had a 76.

The Warriors once again experienced perfect golfing weather and used it to their advantage. The team took the title with a 204, followed by Arlington at 216 and Ashland Greenwood/Elmwood Murdock with a 218. 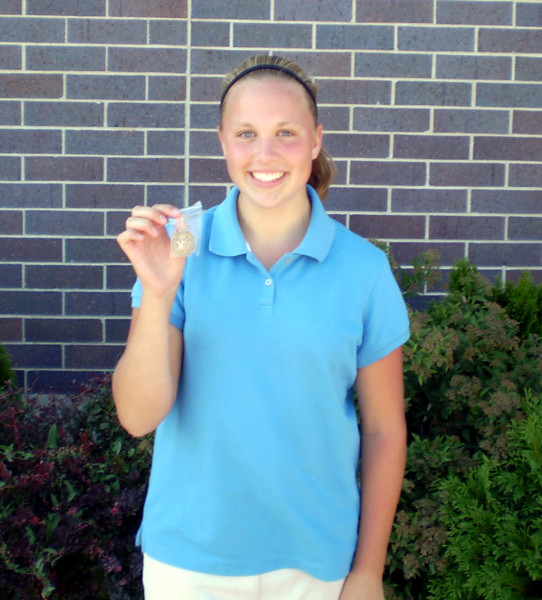 Freshman Emma Harris led the way recording a 42 while tying for the low score of the day.

Fellow Freshman Nicole Pearson added a 53 and was backed up by Sophomore Tina Robinson with a 54, Junior Ali Anderson with a 55, and Junior Hillary Fick with a 61.

“I was really pleased with how the girls played against two conference schools on a course they have never seen,” said Coach Curtis Carlson.

The Warriors will return to action on Monday, September 8 in a duel against Schuyler and on Tuesday will play in the Beatrice Invitational.

Seward (August 29, 2008) - On a picture-perfect day for golf, the Wahoo girls’ golf team competed in the Seward Invitational played at the Seward Country Club.

WHS Freshman Emma Harris led the way with a 2nd place finish. She was tied for the lead after the front nine with a 44, and finished with a 91--four shots back of the champion.

Junior Ali Anderson had the next best score with a 121. She was followed closely by Freshman Nicole Pearson shooting a 123 and Junior Hillary Fick with a 126. Junior Rylea Meyer added a 149 for the Warriors.

The Warriors finished sixth out of nine teams.

“This was a good finish especially since the Invite was full of talented Class B schools, and all of our girls were playing their first varsity meet ever,” commented Girls’ Golf Coach Curtis Carlson.

Wahoo continues its season on Thursday, September 4 at the Ashland-Greenwood Invite.