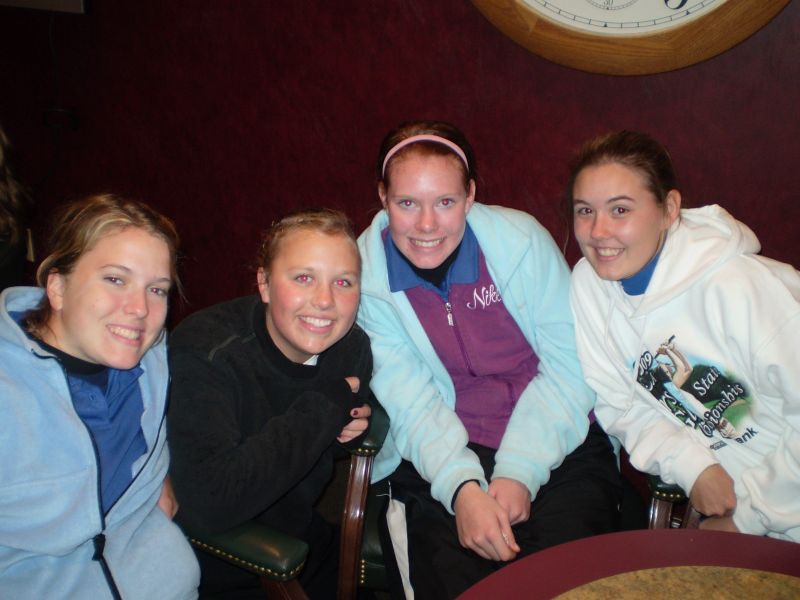 The Warriors battled freezing wind chills and rain throughout the day. Sophomore Emma Harris once again led the way firing a pair of 46’s for a 92. Her 92 just missed placing and was good for an 18th place.

The Warriors finished with a team score of 448, which was good for 13th place.

“We knew going in that it would be very difficult to medal with 14 of the top 15 girls coming back. The conditions made for a very long day but the girls did a great job of overcoming challenging weather. I know that the girls would have liked to play better but I was still very proud of their performances,” said Coach Carlson.

In its 2nd year, the Wahoo Varsity Girls Golf team has qualified for the 2009 State Tournament. This 1-day tournament will be played on Tuesday, October 13. CONGRATULATIONS WARRIOR GOLFERS AND BEST OF LUCK AT STATE!

C-2 District Meet (10/6/09): The Wahoo Girls Golf Team participated at the C-2 District meet held at Miracle Hills Country Club. The Warriors were able to overcome cold and windy conditions for a 3rd place finish. The 3rd place finish qualified the Warriors for State! Individually the Warriors had two girls place in the top ten. Sophomore Emma Harris carded an 85 for a 3rd place finish. Senior Hillary Fick shot a personal best 105 to finish for a tie for 9th place. She lost the scorecard playoff to finish 10th. Sophomore Nicole Pearson just missed placing inside the top ten with a 12th place finish with a 108. Senior Rylea Meyer rounded out the team score with a 134. “All the girls played some of their best golf of the year. Hillary picked a great day to medal for the first time in her career. I had told the girls that if they played their best golf they would have a great chance to qualify. This is a great accomplishment for the program to qualify for State in its second year back,” said Coach Curtis Carlson.

Capitol Conference Invite (10/1/09): On Thursday the Wahoo Golf Team returned to action at the Capitol Conference tournament held at the Syracuse Country Club. The girls played through wet and windy conditions. The Warriors were led by Sophomore Emma Harris. Harris carded a 98, which was good for 2nd place. She was followed closely by Nicole Pearson’s 5th place finish with 106. Hillary Fick added a 120.

Bob Simpson Classic (9/28/09): On Monday the Warrior Girls Golf Team took part in the Bob Simpson Classic played at the Ashland Country Club. The Warriors took 6th place out of 14 teams. They were led by Emma Harris’ 6th place finish with a 104. Harris was followed by Nicole Pearson’s 16th place finish with a 110. Senior Hillary Fick also contributed with a 118. “The girls are continuing to improve and did a great job of handling the wind today,” said Coach Carlson.

Arlington Invitational (9/21/09): On Monday the Wahoo Girls Golf team played at the Arlington Invitational at the Fremont Golf Club. Sophomore Emma Harris took home the meet’s medalist honor with a 96. This was one of only 2 scores under 100. She was followed by fellow Sophomore Nicole Pearson finishing in 8th place with a 112. Senior Hillary Fick carded a 119, which just missed placing by one stroke. “The girls all played well today. They had to battle a challenging course and wet and windy conditions,” said Head Coach Curtis Carlson.

Crete Invitational (9/18/09): The Warriors quickly returned to action the next day participating in the Crete Invitational at College Heights Golf Course. The Warriors were once again led by Emma Harris’ 8th place finish, shooting a 102. Senior Hillary Fick carded a 117. Rylea Meyer and Kristin Daniels both scored a 154. “The girls struggled adjusting to the quickness of the greens today,” said Head Coach Curtis Carlson.

Plattsmouth Dual (9/17/09):The Wahoo Girls Golf Team returned to action participating in a dual against Plattsmouth on Thursday at Bay Hills Golf Course. Sophomore Emma Harris tied for Medalist honors with a 45. Harris was followed by Hillary Fick with a 63 and a pair of 64’s from Rylea Meyer and Kristin Daniel. Dayna Gulliksen also golfed for the Warriors.

Blair Invitational (9/14/09): The Wahoo Girls’ Golf Team was back at it again on Monday at River Wilds Golf Course in Blair. The girls enjoyed near perfect conditions and as a result shot some great scores. As a team the Warriors shot a 451. Individually, Emma Harris again led the way with a 90. Sophomore Nicole Pearson had the next best score with a 107 and was followed by Hillary Fick with a 113 and Kristin Daniel with a 141. “It was good to see the scores continue to drop. Senior Hillary Fick shot her career best today with a 113,” said Head Coach Curtis Carlson. The Warriors return to action Thursday afternoon with a duel against Plattsmouth and again Friday at the Crete Invitational. 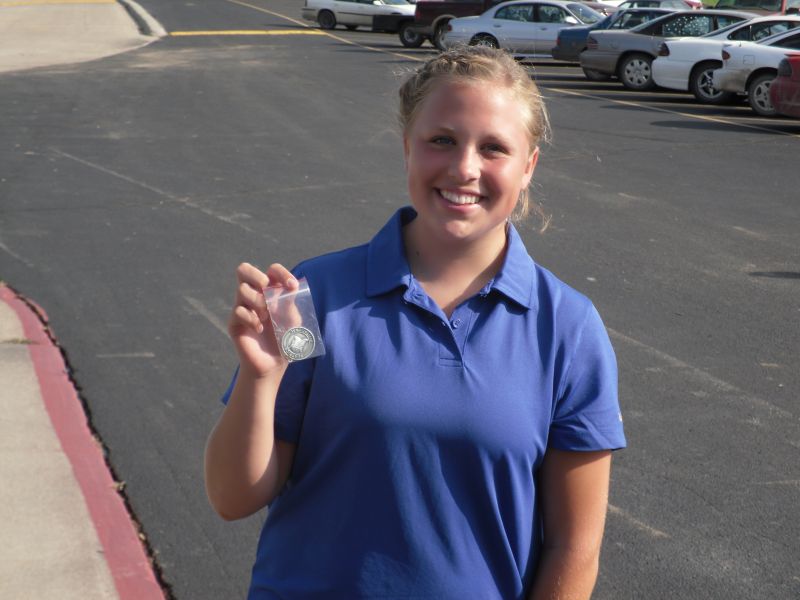 Plattsmouth Tournament (9/10/09): The Warrior Golf team returned to action on Thursday at Bay Hills Golf Club. The team was led by Sophomore Emma Harris’ fourth place finish. Harris shot an 89. She was followed by Senior Hillary Fick with a 120, Sophomore Nicole Pearson 130, and Junior Kristin Daniel with a 131. The team place 8th out of 11 teams with a 470. “The girls continue to work hard and improve with each meet. Bay Hills is another challenging course that makes the girls hit a variety of clubs off the tee,” commented Head Coach Curtis Carlson.

Beatrice Invitational (9/8/09): The Wahoo Girls golf team returned to action on Tuesday at the Beatrice Invitational played at the Beatrice Country Club. The Warriors finished fourth out of 6 teams with a 464. The team was led by Sophomore Emma Harris. Harris carded a 91, which was good for 2nd place. She was followed by fellow Sophomore Nicole Pearson with a 120, Senior Hillary Fick 123, Junior Tina Robinson 130, and Senior Rylea Meyer with a 138. “The Beatrice Country Club is a very challenging course. When only 3 girls score under a 100 it gives you a good idea about how difficult the course was playing,” commented Head Coach Curtis Carlson. The Warriors will return to action on Thursday at the Plattsmouth Tournament played at Bay Hill Golf Club.

Seward Invitational (8/28/09): On a picture perfect day for golf, the Wahoo girls golf team competed in the Seward Invitational played at the Seward Country Club. Sophomore Emma Harris led the way with a one shot victory. She was tied for the lead after the front nine with a 43 and finished up with a 41 on the back nine for an 84. Sophomore Nicole Pearson also medaled for the Warriors shooting a 103, which was good for 12th place. Seniors Hillary Fick added a 115. Rylea Meyer rounded out the team score with a 136. Junior Kristin Daniel also participated in her first varsity meet for the Warriors. The Warriors shot a team score of 438, earning 4th out of 9 teams. This was a good finish especially since the Invite was full of talented Class B schools. Wahoo continues their season on Tuesday with a duel against Schuyler to be played at Schuyler Golf Club.