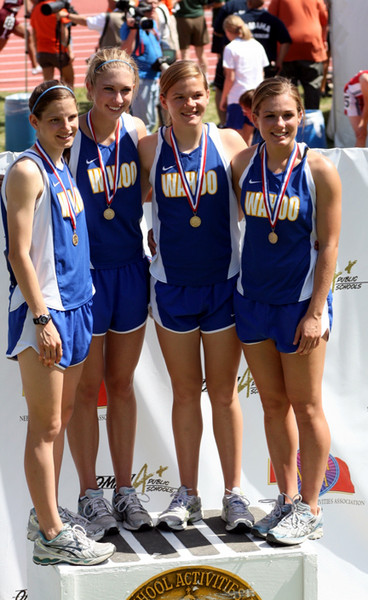 The 2008 Nebraska State track meet at Burke Stadium in Omaha brought out the best in the Wahoo girls 3200m relay team on day one of the meet.

In the first running event of the day, the 3200m relay team, consisting of Erin Curran, Erin Walker, Morgan Hancock, and Mattie Murren, challenged the best that Class B had to offer for the chance at gold. Erin Curran, a junior at Wahoo, started off the Warriors with a tremendous first leg, establishing herself in the lead pack during the first 400m, then asserting her will in the final 300m of the first leg, stretching the lead to twenty meters as she handed off the baton to Erin Walker, a freshman, in a blistering 2:22.

Erin Walker pushed the pace the first 200m, stretching the lead to twenty-five meters and forcing her pursuers to expend a great amount of energy trying to catch her. Erin continued to churn through the middle section of the race, not giving any ground against the Class B field eventually handing the baton to Morgan Hancock, the second of three freshmen, then finally collapsing on the infield after her 2:27 leg.

Morgan Hancock, the newest addition to the 3200m relay, continued to improve upon her two previous relay attempts by running her fastest leg of the season (2:25) and pushing the lead to thirty meters as she handed off the final time to Mattie Murren, the third and final freshman of the team.  Mattie Murren continued to push the pace as the second place team from Bishop Neumann began to try to close ground on the Warriors. Mattie made her final push on the final 100m, as her cousin Sara Reeves closed ground, but Mattie was able to finish strong with a 2:25 leg, capturing the Class B gold medal with a school record time of 9:41.367.

It is hard to describe, in words alone, how proud and excited I was to see their hard work throughout the 2008 season pay off on the biggest stage in Nebraska. These four young ladies will forever be tied to Wahoo High School and Nebraska track and field lore as the best there was in 2008.

Erin Curran is one of the most talented runners that I have had the pleasure of coaching at Wahoo and she continues, each season, proving that her name belongs in the same rankings as the best there is in the Class B rankings and beyond in Nebraska.