LIVE STREAM
All home basketball games will be broadcast live on the district's YouTube Channel: 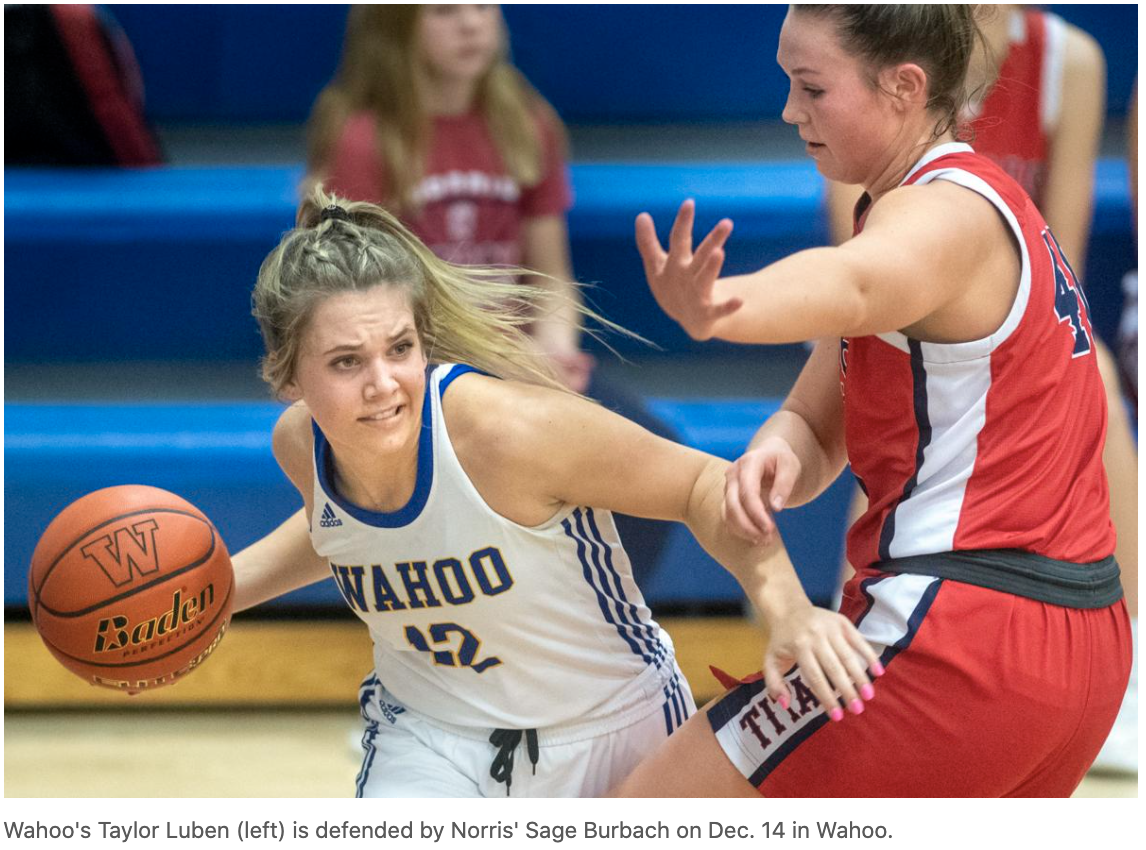 Tuesday night was a big night for the Wahoo Warrior Girls Basketball team! The Warriors knocked off 10-1 Class B Blair 43-26.

The first quarter was a defensive battle between the two teams. Blair won the quarter 7-6 with both teams feeling each other out.

The Warriors found some things to get them going in the second quarter, pulling ahead 18-13 at the break. Karley Golladay scored 5 points in the quarter, along with Sammy Leu and Autumn Iversen adding a 3-point field goal.

The third quarter was another successful period for the Warriors. Wahoo won the quarter 12-5, taking a 30-18 lead into the final quarter. Iversen added 6 more points, along with 3 other players getting a basket.

In the fourth quarter the Warriors continued to build on their lead to win the game 43-26. Leu led the way in the final quarter adding 6 more points.

“I was so proud of how the girls came out and competed against a very talented team in Blair,” said Head Coach Sean Forbes. "We put in a new offense in practice and the girls did a great job of executing it. The girls played so hard the entire game on both ends of the court, and we kept our composure and grinded out a very good win."

The Warriors have back-to-back games this weekend, playing Platteview at home Friday and on the road at D.C. West on Saturday.

The Wahoo Warriors are now 8-2 with a win over Crete on Saturday.

In the second quarter Wahoo continued to build on the lead, taking a halftime score of 30-14 into the locker room. Autumn Iversen led the first half scoring with 9 points.

Crete battled back a little bit in the third quarter, winning the period 10-8, but Wahoo still had a commanding lead. Karley Golladay was the only Warrior to score in the quarter with 8 points.

Wahoo pulled away in the fourth quarter, winning the quarter 20-10, and the final score was 58-34. Seven different players scored in the quarter.

“With the weird reffing situation, I am super proud of how the girls handled the game,” said Head Coach Sean Forbes. "We played really good defense and shared the ball on offense against Crete's 2-3 zone."

Golladay led the way with 14 points and 3 assists. Iversen had 10 points and 6 rebounds. Taylor Luben had 6 points along with 6 rebounds. Sammy Leu had 9 points, 6 rebounds and 2 steals.

Wahoo's next game is Tuesday night against Blair. 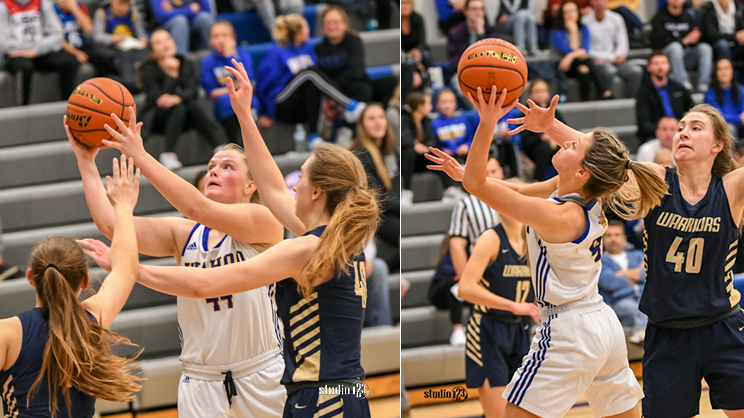 The Warriors got down early but never gave up. The first quarter went Lutheran's way with them taking a 14-6 lead. It was a battle of two really good defensive teams.

In the second quarter Lincoln Lutheran continued to build a small lead, winning the period 9-5 and taking a 23-11 lead into half time.

The Warriors came out in the third quarter with great focus and won the quarter 15-6. From this point on it was a barn burner. Autumn Iversen had two three's in the quarter, along with Sammy Leu's 5 points to lead the come back. Kylee Kenning hit a half court shot at the buzzer to give the Warriors a lot of momentum heading into the fourth quarter.

The fourth quarter was a back-and-forth affair. Wahoo won the quarter 12-8 to win the game by 1. Lincoln Lutheran had a last shot, but the Warriors' great defense kept them from getting a good shot off.

“This was a great high school game! Both teams are really talented and play very good defense,” commented Head Coach Sean Forbes. "We made some offensive adjustments at half time to try and get some scoring going. The girls never stopped believing that they could pull out a win. This is a huge confidence booster that shows that this team can play with the top teams in C-1." 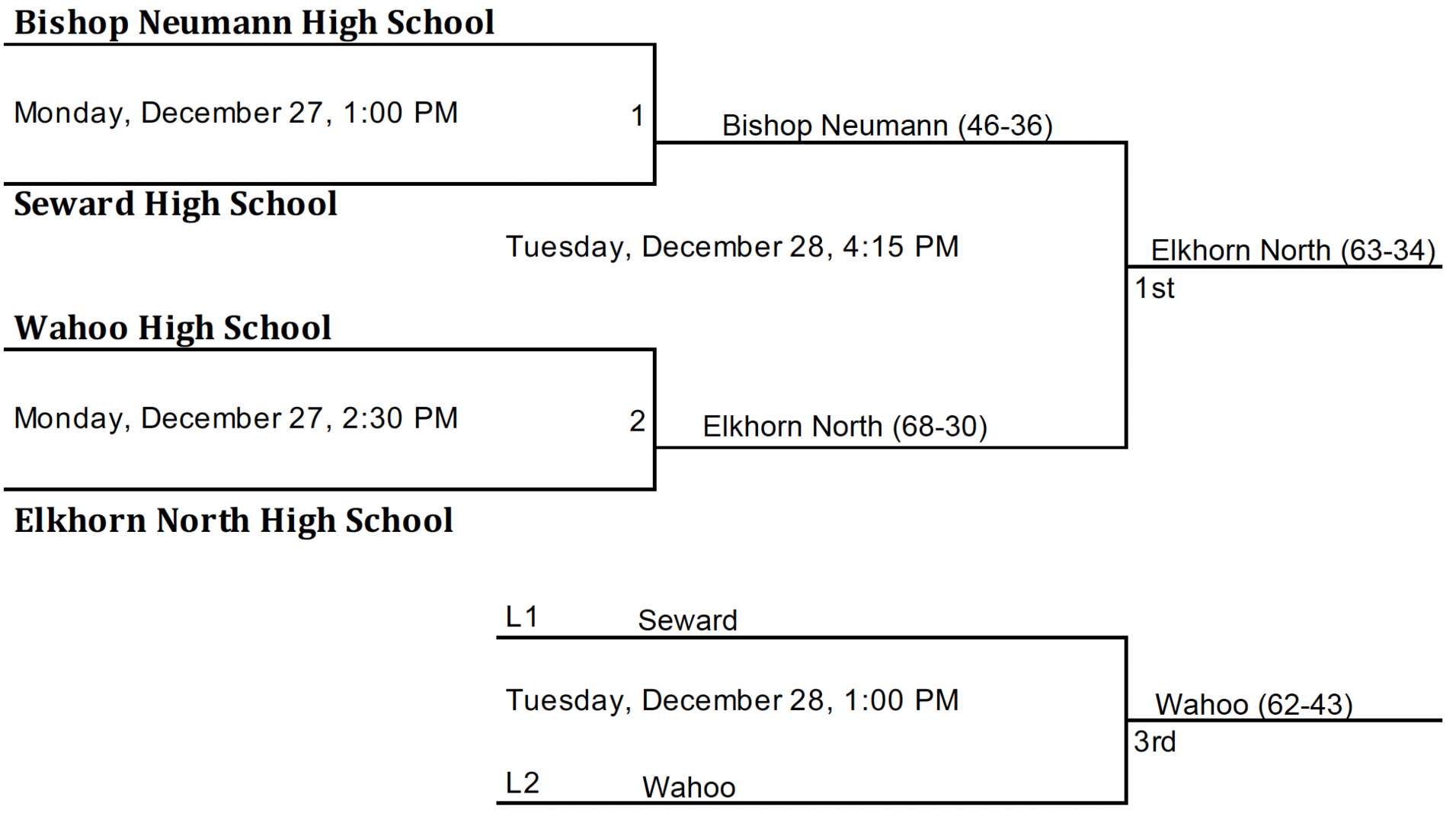 The Wahoo Warriors bounced back with a big win over Nebraska City 63-13 on Thursday night.

The Warriors got out to a hot start winning the first quarter 17-7. Sammy Leu scored 10 points in the quarter. Ten different Warriors got into the game in the opening quarter.

Wahoo put the game away in the third quarter, outscoring Nebraska City 20-4. Leu had 9 more points, with Sidney Smart and Josey Sutton each adding 4 points.

Wahoo continued the great night shutting out Nebraska City in the fourth quarter, while scoring 12 points in the final period.

“The girls came out ready to go and took care of business,” said Head Coach Sean Forbes. "I was really proud of how our girls played with good sportsmanship and supported each other throughout the game. It is always fun when every girl suited up can contribute in a positive way."

Leu led the way with 31 points and 7 steals. Taylor Luben  and Ava Lausterer each scored 6 points. Karley Golladay had 6 points, 3 assists, and 3 steals. Autumn Iversen had 3 rebounds, 5 assists, and 2 steals.

Wahoo's next game is the Holiday Tournament against Elkhorn North at Bishop Neumann.

The Wahoo Warriors took their first loss of the season to a highly rated class B team Norris on Tuesday night.

The first quarter went Wahoo's way, taking an 11-8 lead. Four different girls had a basket in the quarter while holding Norris to two field goals and some free throws.

In the second quarter Norris took a lead scoring 20 in the quarter. Wahoo got into some foul trouble which allowed Norris to shoot eight free throws and make 6 field goals. Sammy Leu got it going in the quarter scoring 8 points for Wahoo.

Wahoo battled back in the third quarter, outscoring Norris 13-9. Leu had another 8 points in the quarter. Wahoo continued to play great defense.

Wahoo also outscored Norris in the 4th quarter 6-5, but it wasn't enough to pull out the win. With great defense Wahoo held Norris to no field goals. Autumn Iversen had two 3-point field goals to help the Warriors fight back. The Titans finished the game with four straight made free throws.

“I can't say enough good things about how hard our girls worked to try and pull out the win,” said Head Coach Sean Forbes. “The girls never gave up and gave it all they had. Our defensive intensity was fantastic."

The Wahoo Warriors won their third win in a row to start the season 55-26 at home over Ashland-Greenwood Tuesday night.

The girls came out and played great defense right out of the gate for Wahoo to lead 13-1 after the first quarter. Taylor Luben scored 5 points in the quarter.

Wahoo continued to play great defense in the second quarter to hold A-G to under 10 points again by only allowing 9 points in the quarter. Wahoo led 24-10 at half time.

The fourth quarter was another good period for Wahoo with all 12 girls getting playing time. Wahoo won the quarter 14-7 and won the game 55-26. The Wahoo girls made 8-10 free throws in the quarter to seal the win.

“I am super proud of the way the girls came out and played defense from the opening tip,” said Head Coach Sean Forbes. “Every girl that saw the court tonight went out and had great energy. We are really doing a great job of pressuring the ball and rotating on passes. We will continue to work hard at practice to work on the things we need to improve on."

Leu led the way with 14 points with 2 assists and 5 steals. Sarah Kolterman had 8 points and 4 rebounds. Autumn Iversen had 6 steals playing great defense. Karley Golladay had 5 points and 4 assists. Ella Lacey had 7 points. Luben did her part with 5 points, 2 rebounds, and 3 steals before leaving the game with an injury. Most of the starters sat out the fourth quarter, allowing the rest of the team to finish the game.

Wahoo had 16 steals to force 28 turnovers on the night.

The Wahoo Warriors earned their second win to start the season 54-29 on the road over Aurora Friday night.

Wahoo led after the first quarter 12-5. Five different players scored in the quarter.

The second quarter was similar to the first, with Wahoo outscoring the Huskies 12-7 in the quarter to go up 24-12 at half time.

The third quarter was the best quarter of the game for the Warriors. Wahoo scored 21 while holding Aurora to 9 in the quarter. The girls made four 3-point shots in the quarter.

Leading 45-21, Wahoo continued to play good defense to finish the Huskies off in the fourth quarter. Nine different girls scored 2 or more points in the game.

“Playing back-to-back games is never easy, but our girls came out and played another good game to take care of business,” said Head Coach Sean Forbes. “I couldn't be happier with the effort of all of our players. The girls have really concentrated on playing great defense in practice and games and it has shown in our first two games.”

Karley Golladay led the way with 14 points with 4 assists and 2 steals. Sammy Leu had 10 points, 3 rebounds, 4 assists, 7 steals, 1 block and took a charge. Autumn Iversen had 7 points, 4 rebounds, 2 assists, 2 steals, and 1 block. Josie Sutton got her first start of her career and had 6 points and 6 rebounds. Taylor Luben played great defense once again to get 4 steals.

Wahoo had 16 steals to force 24 turnovers.

Wahoo hosts Ashland-Greenwood Tuesday night in a girls only game. JV will play at 6:00 p.m. with varsity following. 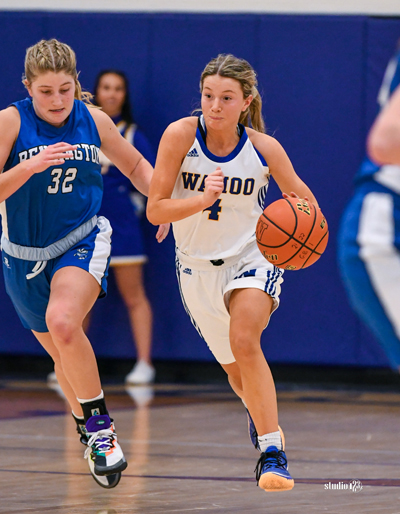 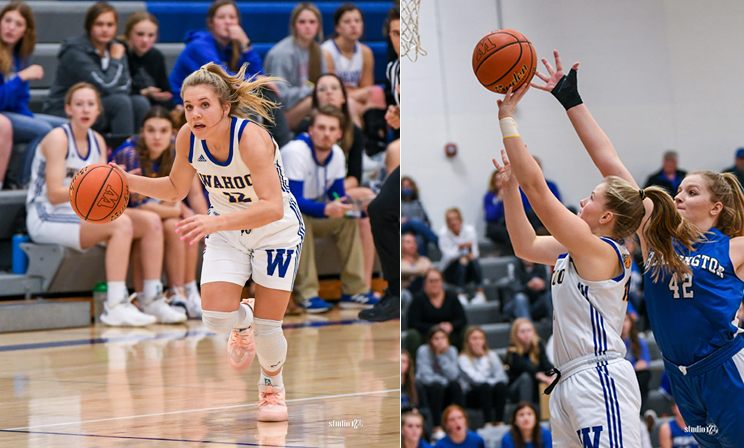 The Wahoo Warriors started the season with a great win over the Bennington Badgers, 60-50, Thursday night in Wahoo.

Wahoo led after the first quarter 16-12. Autumn Iversen started the game on fire with three three-point shots and another basket to give her 11 in the quarter.

Bennington battled back to take a one-point lead at half time 26-25.

The third quarter was a very good team effort on both the offensive and defensive ends of the court. Wahoo out-scored Bennington 15-6 in the quarter to lead 40-34. Karley Golladay had 7 points in the quarter.

Wahoo pulled away in the fourth quarter, scoring 20 points to win 60-50. Sammy Leu had 7 in the fourth to lead the Warriors. Seven different players contributed with a basket in this final quarter.

“I was super pleased with how hard we played in the first game,” said Head Coach Sean Forbes. “Bennington is a highly rated team in Class B so we knew we had to come out and play great to get the win. All of our kids really competed on the defensive end of the court. Our defensive pressure throughout the whole game really was fantastic. Bennington had two talented post players and our girls really stepped up to the challenge to make them work for everything they got. Kylee Kenning, Josie Sutton, and Sarah Kolterman all played great post defense throughout the game.”

Wahoo will travel to Aurora Friday night to take on the Huskies. 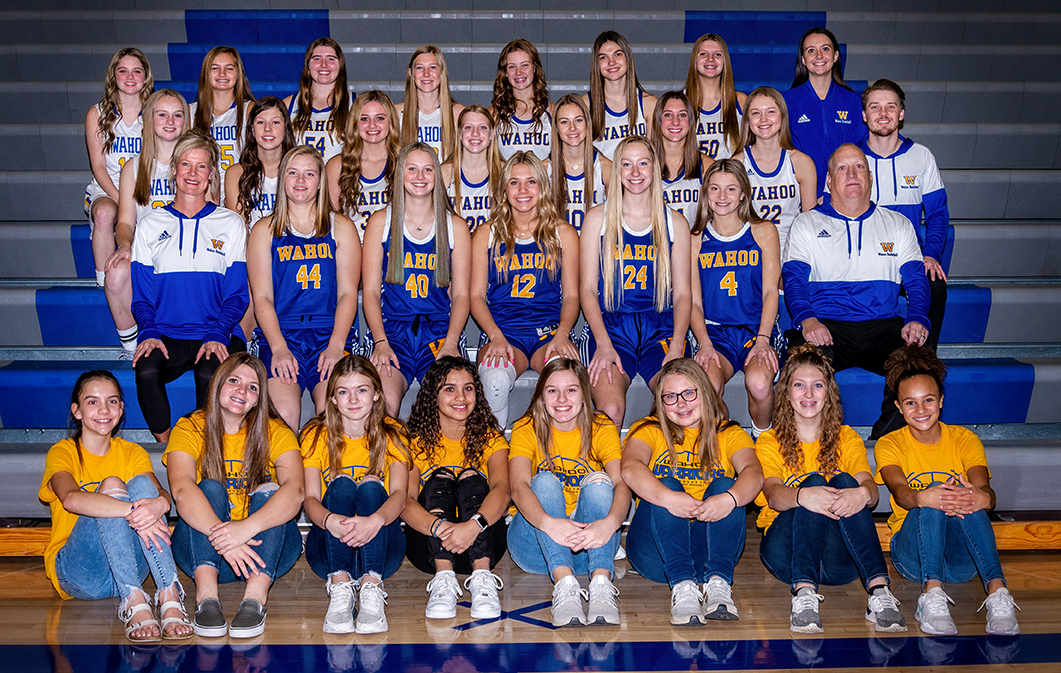 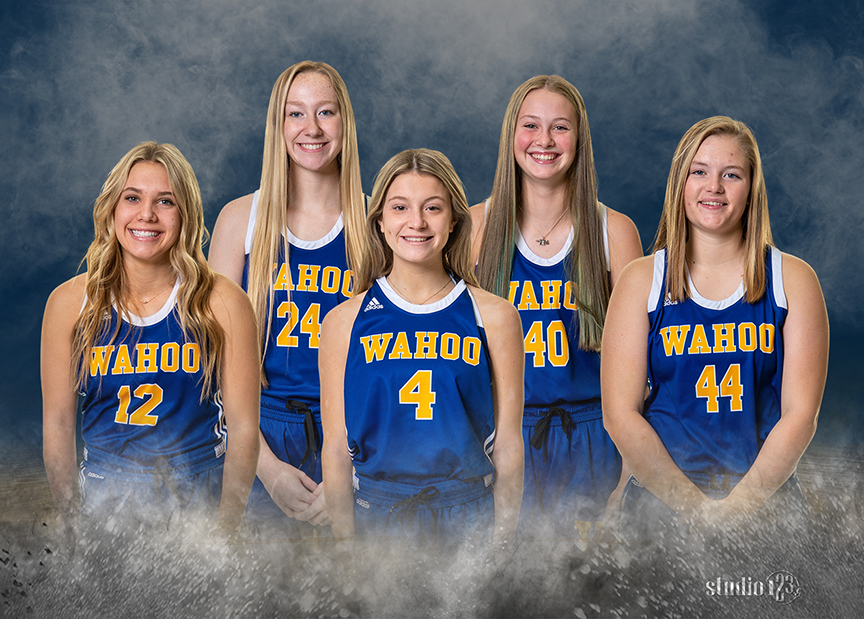