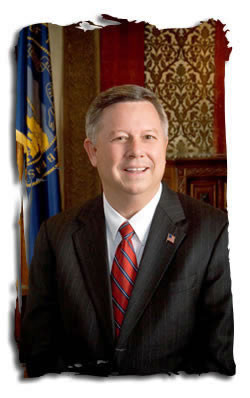 Governor Dave Heineman was sworn-in as Nebraska’s 39th Governor on Friday, January 21, 2005, when Governor Mike Johanns became the Secretary of Agriculture. Governor Heineman was elected to his first full term on November 7, 2006 by the largest margin in recent history. In May of 2006, he overcame a forty point deficit to win an historic primary. Prior to becoming Governor, he served more than three years as Lieutenant Governor and nearly seven years as State Treasurer.

Governor Heineman’s vision for Nebraska is based on four priorities: education, economic vitality, efficiency in government, and protecting families.

Since becoming Governor, he has worked with the Nebraska Legislature to pass the largest tax relief package in the history of the state and the most comprehensive jobs creation, economic incentive legislation since the 1980s. Governor Heineman has also signed into law a bill making the Department of Health and Human Services more efficient, more effective and more accountable.

Governor Heineman is a strong proponent of local control of schools and a quality education for all children. He supports high academic standards and increased parental involvement in education.

Heineman was elected Lieutenant Governor in 2002 and as Lieutenant Governor, he served as Nebraska's director of Homeland Security, chairman of the Nebraska Information Technology Commission (NITC), and the presiding officer of the Nebraska Legislature. As chairman of the NITC, he worked with the University of Nebraska to create a statewide telecommunications backbone, for use by both the university and state government, to reduce costs, expand services and enhance distance learning opportunities. As the state's Homeland Security director, he led Nebraska into the national spotlight helping the state be recognized for its innovative approaches to homeland security.

Governor Heineman was first elected to a statewide office in 1994, as the Nebraska State Treasurer. He was re-elected to that post in 1998. As Treasurer, he implemented the Nebraska College Savings Plan, which has been recognized as one of the best college savings programs in the country.

The Governor is a native Nebraskan. He was born in Falls City and grew up in Fairbury, McCook, Benkelman and Wahoo, where he graduated from high school. He graduated from the United States Military Academy at West Point in 1970 and served five years in the U.S. Army, rising to the rank of captain. He is also a graduate of the Army's Airborne and Ranger Schools.

Governor Heineman’s wife of thirty years, Sally Ganem, is a former elementary school principal and teacher. Sally is a graduate of Omaha South High School and earned her bachelor’s and master’s degrees at the University of Nebraska at Omaha. They have one son, Sam, who is a senior at Midland Lutheran College in Fremont.