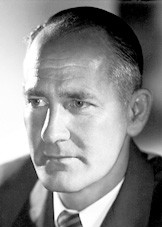 WAHOO – From a small-town kid to a world-known scientist, George Beadle left his mark in the science community.

Beadle was born Oct. 22, 1903 to Chauncey and Hattie Beadle on a farm just south of Wahoo.

He graduated from Wahoo High School and then went on to graduate from the University of Nebraska at Lincoln Agriculture College.

Beadle would move throughout the country, working and teaching at various institutes.

But the Nobel Prize-winning scientist always made time to return to Nebraska.

David McGill of Davey, a retired UNL genetics professor, met Beadle several times and attended many of his lectures.

McGill recalls one speaking engagement Beadle had with a group of Saunders County teachers, talking about the importance of being an educator.

“The thing that impressed me was that when he was through, all the teachers went away thinking, ‘I'm in the most important job,’” said McGill.

McGill added that it was Beadle’s ability to speak to groups that helped set him apart from other scientists.

“Some scientists get up and talk to a 100 people and two people understand their message and 98 didn’t,” said McGill. “But he knew exactly how to adapt his talk to his audience, just like a magician.”

Beadle was a scientist before he was ever a teacher.

In 1926, he applied his undergraduate degree by working for Professor F.D. Keim, who was studying hybrid wheat. In 1927, he earned his master’s degrees and became a teaching assistant at Cornell University, where he worked until 1931.

In 1931, he obtained his doctorate degree and was awarded the National Research Council Fellowship at the California Institute of Technology.

While at the institute, he worked on Indian corn and began working on crossing over genetics in fruit flies. He later began to study the development of eye pigment in the fruit fly.

“I couldn’t imagine how he could have done it, but he did it,” McGill said with a laugh. “He was a big man with big hands doing these experiments that you had to have the finest touch.”

That genetic study led to the work on biochemistry of the genetics of the fungus Neurospora, which earned Beadle and Edward L. Tatum the 1958 Nobel Prize for Physiology.

He returned to the California Institute of Technology in 1946, as a biology professor and chairman of the division of biology.

In 1961, Beadle was selected as chancellor of the University of Chicago and was named president of the university later that year. After seven years in Chicago, Beadle retired and moved back to California, where he continued work on a corn plant called teosinte.

McGill said Beadle had a scientific curiosity that led him to study corn, wheat, fruit flies and rice.

Various academic institutions respected Beadle’s work. He was awarded 19 honorary degrees from universities such as Yale, Northwestern and Oxford.

Beside the Nobel Prize, Beadle received numerous other awards throughout his illustrious career.

He was awarded the Lasker Award of American Public Health Association, the Dyer Award, the Emil Christian Hansen Prize of Denmark, the Albert Einstein Commemorative Award in Science, the National Award of the American Cancer Society and the Kimber Genetics Award of the National Academy of Sciences.

“I don’t know where he’d rate today among scientists, but he was world known for his accomplishments,” said McGill. “He was just an ordinary farm boy who got interested in science and did fantastic work.”

Other Articles on George Beadle

George Wells Beadle was born at Wahoo, Nebraska, U.S.A., October 22, 1903, the son of Chauncey Elmer Beadle, a farmer, and his wife Hattie Albro. George was educated at the Wahoo High School and might himself have become a farmer if one of his teachers at school had not directed his mind towards science and persuaded him to go to the College of Agriculture at Lincoln, Nebraska. In 1926 he took his B.Sc. degree at the University of Nebraska and subsequently worked for a year with Professor F.D. Keim, who was studying hybrid wheat. In 1927 he took his M.Sc. degree, and Professor Keim secured for him a post as Teaching Assistant at Cornell University, where he worked, until 1931, with Professors R.A. Emerson and L.W. Sharp on Mendelian asynopsis in Zea mays. For this work he obtained, in 1931, his Ph.D. degree. In 1931 he was awarded a National Research Council Fellowship at the California Institute of Technology at Pasadena, where he remained from 1931 until 1936. During this period he continued his work on Indian corn and began, in collaboration with Professors Th. Dobzhansky, S. Emerson, and A.H. Sturtevant, work on crossing-over in the fruit fly, Drosophila melanogaster.

In 1935 Beadle visited Paris for six months to work with Professor Boris Ephrussi at the Institut de Biologie physico-chimique. Together they began the study of the development of eye pigment in Drosophila which later led to the work on the biochemistry of the genetics of the fungus Neurospora for which Beadle and Edward Lawrie Tatum were together awarded the 1958 Nobel Prize for Physiology or Medicine.

In 1936 Beadle left the California Institute of Technology to become Assistant Professor of Genetics at Harvard University. A year later he was appointed Professor of Biology (Genetics) at Stanford University and there he remained for nine years, working for most of this period in collaboration with Tatum. In 1946 he returned to the California Institute of Technology as Professor of Biology and Chairman of the Division of Biology. Here he remained until January 1961 when he was elected Chancellor of the University of Chicago and, in the autumn of the same year, President of this University.

During his career, Beadle has received many honors. These include the Hon. D.Sc. of the following Universities: Yale (1947), Nebraska (1949), Northwestern University (1952), Rutgers University (1954), Kenyon College (1955), Wesleyan University (1956), Birmingham University and Oxford University, England (1959), Pomona College (1961), and Lake Forest College (1962). In 1962 he was also given the honorary degree of LL.D. by the University of California, Los Angeles. He also received the Lasker Award of the American Public Health Association (1950), the Dyer Award (1951), the Emil Christian Hansen Prize of Denmark (1953), the Albert Einstein Commemorative Award in Science (1958), the Nobel Prize in Physiology or Medicine 1958 with E.L. Tatum and J. Lederberg, the National Award of the American Cancer Society (1959), and the Kimber Genetics Award of the National Academy of Sciences (1960).

He is a member of several learned societies, among which the National Academy of Sciences (Chairman of Committee on Genetic Effects of Atomic Radiation), the Genetics Society of America (President in 1946), the American Association for the Advancement of Science (President in 1955), the American Cancer Society (Chairman of Scientific Advisory Council), the Royal Society of London, and the Danish Royal Academy of Science.

Beadle has married twice. By his first wife he had a son, David, who now lives at The Hague, the Netherlands. His second wife, Muriel McClure, a well-known writer, was born in California. Beadle's chief hobbies are rockclimbing, skiing, and gardening.