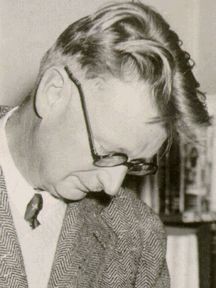 Clarence William Anderson, born in Nebraska in 1891 and died in 1971, he was a famous horse artist, lithographer, author of many children’s books, poet, and an accomplished rider - he is well known for his love of horses - was a judge of hunters and jumpers by the American Show Association.

Anderson studied at the Art Institute of Chicago and then moved to New York to become a freelance artist. He married poet Madeline Paltenghi. C. W. Anderson started his career by illustrating for authors and eventually began developing texts to his life like black and white drawings. He was a member of the Society of American Etchers and exhibited his prints and continued his art career by authoring and illustrating many books about horses. His works have been displayed in galleries and museums throughout USA.

He wrote over 40 books he will be best known for his series of stories about the adventures of a boy named Billy and his pony , Blaze, first published in 1936, The stories revolve around proper care of the horse, while teaching a lesson.

C.W. Anderson also created covers for the “Saturday Evening Post”. He made his home in Mason, where his wife grew up, and used Mason for his settings, the children of Mason as his subjects and he taught art in school at Mason. Some of the books using Mason as a background are, “Billy and Blaze”, “The Crooked Colt”, “The Lost Quarry”, and “Blaze and the Gypsies”.