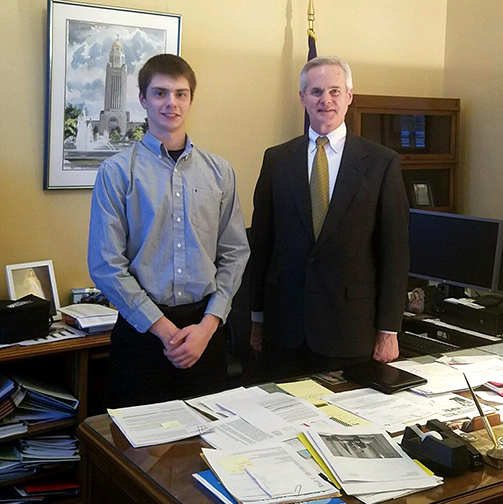 Chase Stebbing gets a taste of life in state politics

WAHOO – Trying to get a vision for his future goals, Chase Stebbing decided to start with a glimpse from the top.

“I’m trying to figure out what I want to do in life,” said the Wahoo High School junior.

Stebbing’s father, Andy Stebbing, is the Lancaster County treasurer and asked for a day with the governor, but instead his son got to shadow Lt. Governor Mike Foley.

“He presides over the legislature and I got to watch what happens for a couple of hours,” Stebbing said.

His day started just before 9 a.m. and he watched public hearings for the morning, before accompanying Foley for lunch.

“Each re-referencing lasted about an hour and didn’t change anything in the end,” Stebbing said.

Among the topics discussed, Stebbing said he heard about declassifying information and campaign registration, but missed what he heard was a heated discussion the previous day about an anti-abortion license plate.

Stebbing said he also got a tour of the capitol and met with District 23 State Sen. Bruce Bostelman.

Stebbing said he has an interest in politics, but remains undecided as he also has interests in engineering and law.