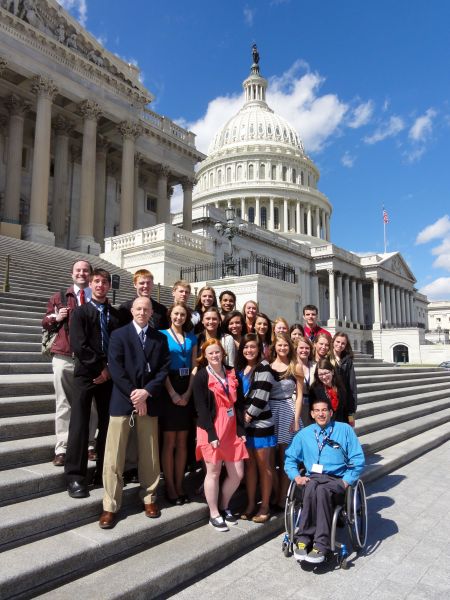 Today was our final full day in D.C.

We began the morning with a private tour of the U.S. Patent Office in Alexandria. It was a fascinating presentation to learn about the patent process. Two patent examiners gave us a behind-the-scenes look at the process. We also got see original patents of the Lego, the Wright Brother’s plane, and several others.

Students had independent study time this afternoon. Many chose to go back to Georgetown, while others returned to the museum at Ford’s Theatre.

Students concluded their trip with a final banquet and then a dance tonight. We’re heading out at 4:00 a.m. tomorrow morning and should be back in Nebraska by 9:30 a.m. It has been an unforgettable trip, with a lot of new experiences, memories, and friendships. What a great group!

Today was our official "Capitol Hill Day" where we had a chance to meet with our elected representatives. 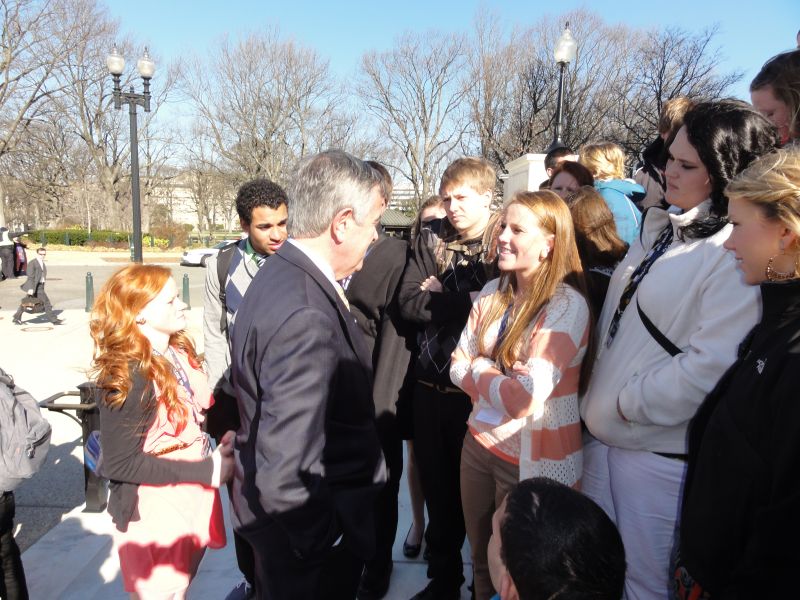 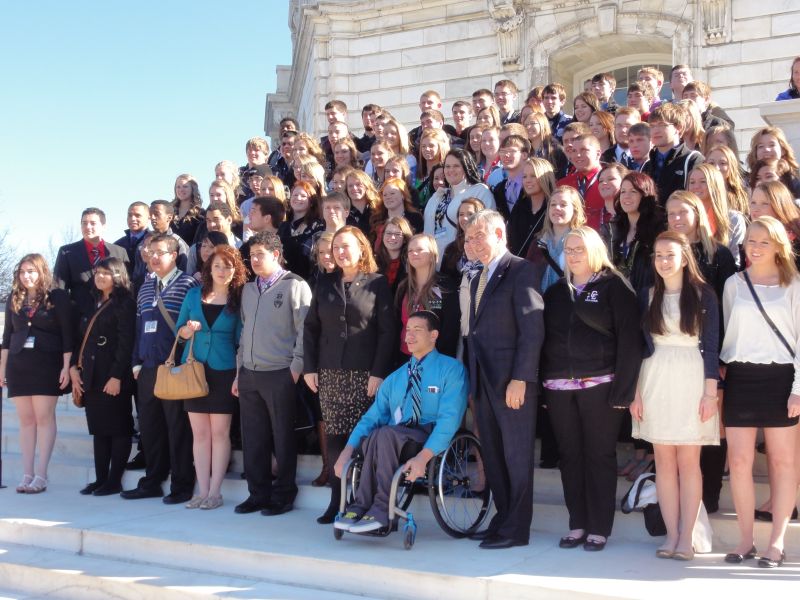 We then got a tour of the U.S. Capitol Building and also had an opportunity to observe the U.S. Senate from the above gallery seats. It was a busy day with the senators debating the budget and the impending government shutdown next week.

Our students got to see the likes of John McCain, Harry Reid, and others on the Senate floor. Pretty cool!

We spent the remainder of the afternoon exploring the Library of Congress and the Supreme Court. Tonight students participated in a lively debate between a liberal and conservative and had a chance to voice their own thoughts with their fellow Close Up classmates. Busy day, but what a unique opportunity for our students!

Tomorrow it's supposed to get cold again for some independent study time. Hard to believe the week is almost over!

2013 Close Up students jump for joy by the Reflecting Pool in front of the
Lincoln Memorial, which was renovated and recently re-opened to the public.

Today marked the second full day of the Close Up program for students.

Today mostly focused on our nation’s significant war memorials. Students visited and studied the WWII, Korean, Vietnam, and Iwo Jima Memorials. In addition they also paid a visit to the Lincoln Memorial, which of course honors our 16th president and marks the spot where Dr. Martin Luther King, Jr. delivered his famous “I Have a Dream” speech.

Tonight students prepped for Capitol Hill day tomorrow, where we will meet with our congressional representatives, as well as participated in a mock Congress. Should be a great day up on the Hill tomorrow. Weather was fantastic today and is expected to be tomorrow as well!

Today was the first full day on the Close Up program for students, and it was a chilly and wet one!

Upper 30s and low 40s with occasional rain showers dominated the day, but that didn’t stop our students from exploring some important monuments on the National Mall. Among those monuments today included the Jefferson Memorial, the FDR Memorial, and the new Martin Luther King, Jr. Memorial.

After lunch, students stopped by the White House for an up close view from Pennsylvania Avenue. Following the White House, they had an awesome opportunity to meet with POLITICO’s Ken Vogel on the role of media in today’s politics.

And finally, the evening was capped off with a visit to the historical Ford’s Theatre in downtown Washington, D.C. Students watched a fantastic performance of “Hello Dolly” at the theatre where our 16th president was assassinated in 1865. For many students, this was their favorite activity of the day.

Tomorrow will be a full day with another trip to the National Mall and a study of the war memorials. Hopefully it will be warmer and drier!

We woke up to a chilly morning in D.C., transferred hotels, and headed over to Arlington National Cemetery.

Students witnessed the powerful changing of the guard ceremony at the Tomb of the Unknown Soldier and also saw the grave of John F. Kennedy. We also hiked up to Robert E. Lee’s home at the top of Arlington. The view from the top of the cemetery is spectacular – probably the best in D.C.

After Arlington, we took the Metro down to the Smithsonian Museums of Natural History and American History. In the American History Museum, students gazed upon the original Star Spangled Banner from the War of 1812 that inspired Francis Scott Key and our National Anthem. Additionally, they also saw numerous other important historical artifacts from our history.

In the latter part of the afternoon, we visited the United States Holocaust Memorial Museum. This somber and powerful museum that chronicles the history of the Holocaust was the best part of the trip, so far, for many of our students.

Tonight, students checked into the Close Up program and met their new roommates with an orientation dinner and activity. Tomorrow will be a busy day on the Mall, studying many of our nation’s most sacred monuments. Hopefully the snow will hold off!

Our first stop today was at the historic home of George Washington at Mount Vernon.

It was supposed to rain all morning and afternoon, but we lucked out and the sun broke early in the morning. Students toured the first President’s mansion and checked out his amazing scenic view of the Potomac River, explored the grounds of Mount Vernon and observed Washington’s tomb, where he is buried with his wife and other family members.

They also got to see the awesome educational center chronicling the life of Washington.

We then bussed over to the Smithsonian Air & Space Museum. This expansive museum gave students the opportunity to explore everything from the Apollo missions to Cold War missile technology.

Finally, we finished the day at the National Zoo and saw the pandas, but the trip was cut short due to rain moving in. Tonight we had a pizza party and then headed across the bridge over to Georgetown and some students got some cupcakes from D.C. Cupcakes. Busy day tomorrow, so we should sleep well tonight!

We departed from the school bright and early at 4:30 a.m. Got checked in at the Omaha airport and hopped on a flight to Chicago, with a two-hour layover and then got into D.C. at 1:30 p.m.

Our one major stop for the day was at the National Archives where we got a private behind-the-scenes tour from Nebraska native and education specialist Dave Rosenbaum. Students had the opportunity to view the “Charters of Freedom” including: the Declaration of Independence, the Constitution, and the Bill of Rights.

We then checked into our hotel in Rosslyn and had dinner at the Pentagon City Fashion Centre. Lights out fairly early and everyone slept well from a long day. A busy full day tomorrow!