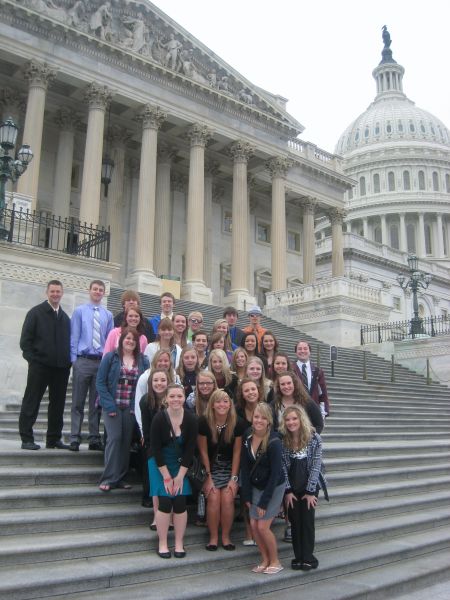 Daily Highlights of This Year's Tour of Washington, D.C.

Thursday, March 24 Today was our final full day in D.C. We began the day with a White House tour, our first one in 4 years! It was great to get in to see the White House - a once-in-a-lifetime opportunity! We then walked a few blocks up Pennsylvania Avenue to the National Archives, where we gazed upon the "Charters of Freedom," among them being the Declaration of Independence, the Constitution, and the Bill of Rights--very cool and definitely a highlight of the trip for the kids. Students then had independent study time this afternoon. Many chose to visit Georgetown or Chinatown. Some went back to revisit the Smithsonians. The night concluded with a final workshop and banquet dinner and then a dance (although I think most of our students are too tired to dance very hard!). We head home tomorrow, flying out of Baltimore. If all goes as planned we should be back in Wahoo by 8:00 p.m. It's been a great trip, we've seen and done a lot, the students have been awesome, and we've made a lot of memories. Sad to leave, but it will be good to be home.

Wednesday, March 23 Today was Capitol Hill Day. Normally, today is a day where we get to meet with our representatives and senators, but unfortunately they are on recess this week. However, we still got to visit the U.S. Capitol Building and meet with staffers from both Senator Johanns and Nelson's office. They were both very accommodating. We also visited the U.S. Botanical Gardens and the United States Supreme Court today. Many of our students went to the Kennedy Center tonight for a theatrical performance while others attended a "Night On the Town" option with Close Up. Both options gave students a unique opportunity to see DC in a different way. Tomorrow we plan to have a tour of the White House and visit the National Archives to see the original Declaration of Independence, Constitution, and Bill of Rights. 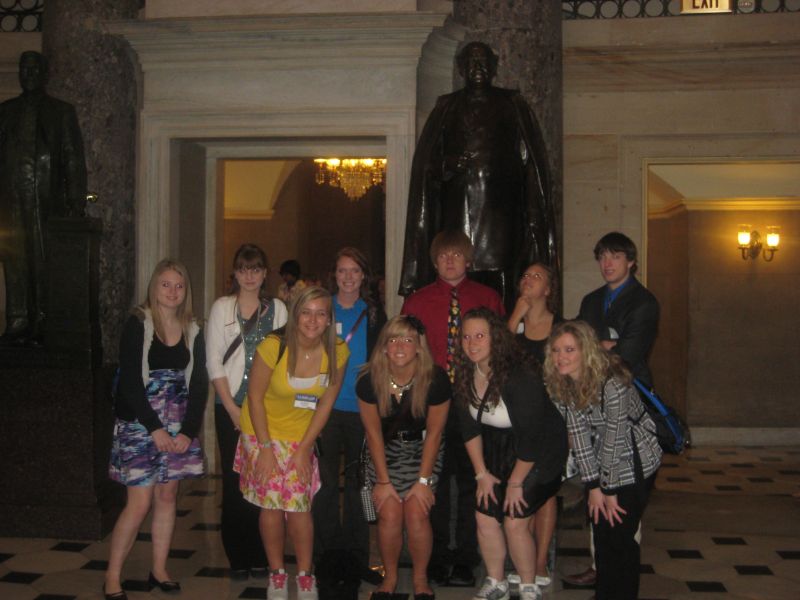 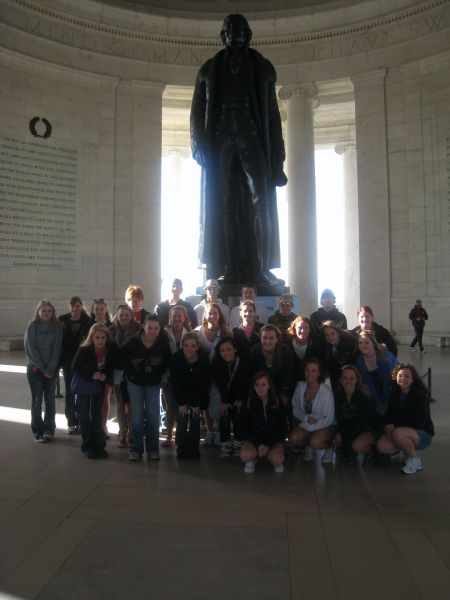 Monday, March 21 Today was the first full day on the Close Up program for students. They had a very busy day. The day began with memorial study visits at both the Jefferson Memorial and the FDR Memorial. They then spent their lunch at Smithsonian's Air & Space Museum, followed by a White House study visit and examining some of the various historic neighborhoods in and around the DC area. This evening students participated in a domestic issues debate workshop, where they listened to both a liberal and conservative commentator discuss their political views. Tomorrow students will visit and study the various war memorials on the National Mall.

Sunday, March 20 Another sunny day in Washington. A bit cooler, but nice. Many trees are beginning to blossom and the grass is turning green. We began the day with a sobering experience at Arlington National Cemetery. Here, students saw the Tomb of the Unknown Soldier and the gravesite of President John F. Kennedy. We then took the metro over to the Washington Monument. When we arrived at the top of the 500-foot monument, students observed a panoramic view of Washington from the center of the national mall. We then took a brief walk to the United States Holocaust Memorial Museum. It was clear from the comments of several students that this museum was a very moving experience. We also had the opportunity to check out the Smithsonian American History Museum, where the original Star Spangled Banner is displayed, along with many other American treasures. This evening students began the Close Up program with a banquet dinner and a visit to the Iwo Jima Memorial. One important note: Our students will be featured on a live C-Span broadcast Thursday morning beginning at 7:30 central time. Be sure to check it out if you have time!

Saturday, March 19 We started off the day early once again with a tour of the Jefferson Memorial on the tidal basin. We then headed over to 1600 Pennsylvania Avenue to gaze at the White House and snap a few photos. Back on the bus we headed to the National Cathedral as students were amazed by its architectural beauty. After lunch in Georgetown we visited Mount Vernon - the home of George Washington. According to many students, this is one of their favorite parts of the trip so far. We ended the day with a pizza party at the hotel room! Tomorrow plans to be another busy day. Check back for more updates!

Friday, March 18 We left the school bright and early at 3:30 a.m. for our 6:00 flight into Baltimore. Everyone was excited and ready to go. Both of our flights were on time and we arrived in Baltimore at 12:30 p.m. EST. Our first and only major stop of the day was at the Naval Academy in Annapolis. Students toured the campus and learned of its rich history, including athletes, naval heroes, and famous statesmen. It was an absolutely gorgeous day in Maryland - 75 degrees and sunny. We checked into our hotel this evening and students had their first opportunity to use the metro system as we had dinner at pentagon city. Tomorrow we will explore many other exciting sights in and around the DC area. Everyone was tired and slept well!