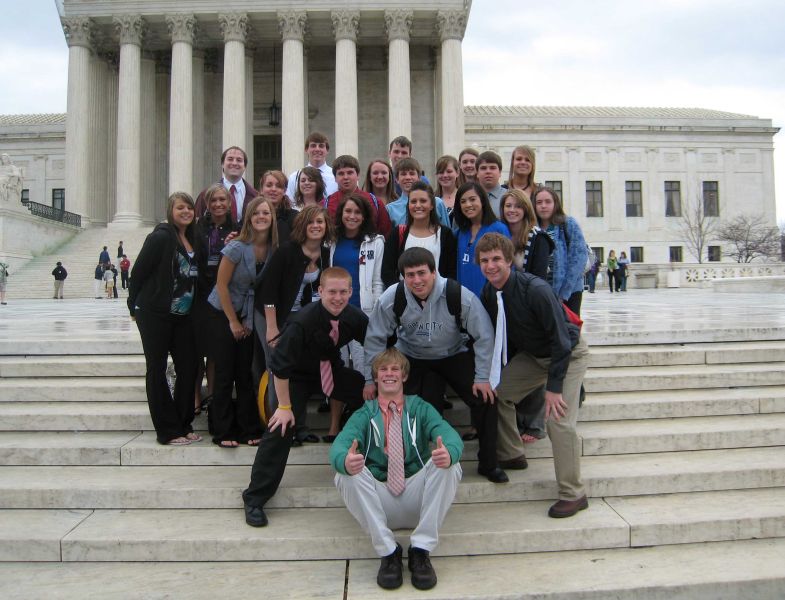 2009 Close Up Students Enjoy Another Great Trip to Nation's Capitol

The 2009 Close Up class recently returned from a once-in-a-lifetime experience in Washington D.C. Twenty-six students spent nine days in the nation’s capital seeing and participating in a wide variety of activities. Students spent the first day and a half of the trip exploring the city independently, outside of the Close Up program.

Despite a rocky start with a flight cancellation on Friday, the students still had a great trip. All of the first day activities were rescheduled for the following Friday.

Students arose early on Saturday to head to Mount Vernon – the home of George and Martha Washington. Students had the opportunity to tour the mansion and walk the grounds as well as explore the education center. We ate lunch in the Mount Vernon food court. Following Mount Vernon we headed north to Baltimore. Here, we explored Fort McHenry – the birthplace of the Star Spangled Banner. The fort itself is in great condition and park rangers were happy to answer many historical questions about the infamous battle in the War of 1812 that lead to our national anthem.

On Sunday, students again had a variety of experiences. We arose early to take a self-guided tour of Arlington National Cemetery. Here, we saw the final burial place of nearly 300,000 veterans as well as witness the solemn changing of the guard ceremony at the Tomb of the Unknown Soldier. In addition, students had the opportunity to see John F. Kennedy’s gravesite as well as the home of Confederate General Robert E. Lee.

We then transferred via the subway to the Washington Monument where students escalated to the top of the monument for a spectacular view of the National Mall. Walking one block south, students then investigated the Holocaust Museum. Students had the opportunity to experience the Holocaust first hand as many original artifacts were on display in this important museum. At the end of the day, we transferred to our new hotel and students began the official Close Up program.

While on the Close Up program the remainder of the week, students explored many other attractions. Not only did they explore many of the famous war memorials (Korea, Vietnam, WWII), but they also visited other important monuments (Lincoln, FDR, Jefferson). Program instructors worked individually with students to give them the history of the monuments as well as give them time to survey them individually. In addition students also met with other students from around the country to share opinions and debate important issues that face our nation.

On Wednesday, Wahoo students had the opportunity of meeting with Nebraska’s representatives one-on-one to ask them important questions facing their future. Unfortunately, Senator Mike Johanns was unable to meet with us, but his staff answered our students’ questions. Students were able to meet with Senator Ben Nelson and Congressman Jeff Fortenberry. That night students attended the play “Shear Madness” at the Kennedy Center. This was a highlight for many students as the murder mystery plot involved the audience in solving the case.

On Thursday, students had the unique opportunity that no other Close Up class has experienced – participating in a live taping of C-Span. While in the Newseum, students were part of a live audience where they could ask questions to experts. The topic this week was gun control. Two of our students, Derek Virgl and Skye Sabatka, both had the chance to be on the show, which was nationally televised.

The final Friday was used to reschedule what we missed on the first Friday due to flight cancellations. We arose early and headed north again, this time to Annapolis, Maryland, where they perused the campus of the Naval Academy. A large campus and strict military guidelines left many students both inspired and curious about the history and day-to-day life of this unique University. After lunch in downtown Annapolis, we received a tour of the National Cathedral – a beautiful gothic style cathedral that took over 80 years to construct.

In our final evening we celebrated a successful trip with a pizza feed, got some rest, and headed back home (no flight cancellations!) on Saturday.

2009 Close Up Students Enjoy Another Great Trip to Nation's Capitol