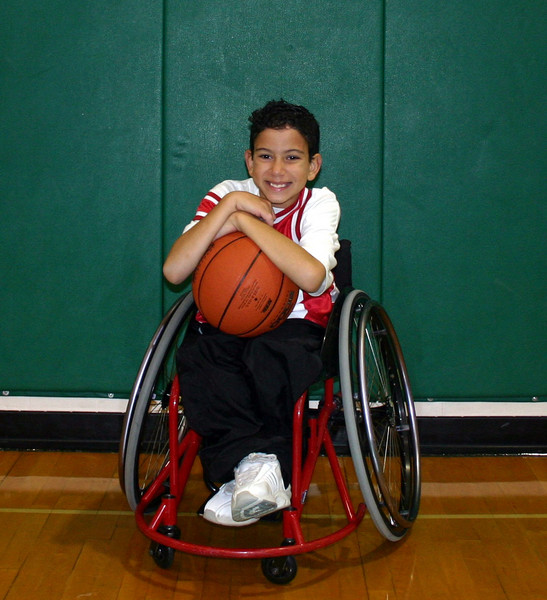 "He shoots! He scores!" the announcer screams over the buzzer as the three-point shot swooshes through the nylon net of the hoop. The player wheels back to his teammates for a couple of high fives before the halftime break begins.

This event may sound strange to some, but to Kaneja "Lady killer" Russ, as his teammates call him, it is completely normal. Russ has been playing wheelchair basketball for the Nebraska Red Dawgs for two years. He heard about the team at a wheelchair sports camp when he was eight.

He plays on the Prep team, of players age eight to twelve. At this level, players use 8-1/2' baskets. At the varsity level, baskets 10' are used on high school regulation courts. There are 20 players on the team from around Nebraska, Iowa, and Missouri. A few athletes from North Dakota drive four hours to practice with the team at the University of Nebraska at Omaha.

Russ's favorite aspect of the sport is traveling. Because wheelchair teams are so few, the teams must travel to compete. The Prep team has been to Alabama, Indiana, Illinois, Minnesota, Wisconsin, and Missouri. The Varsity team has traveled as far as Texas and California to participate in tournaments.

Recently in the Prep National Tournament, the Red Dawgs took sixth place out of sixteen teams. This stands as a milestone in the Red Dawgs' program, whose Prep team has never placed above eighth at the tournament.

In addition to being on the road, Russ also takes pride in boasting about his many injuries. Blisters and calluses cover his hands from pushing his chair across the court. Also, there have been several instances when he has fallen, and even been ejected from his wheelchair.

"In one case," Russ's mother, Lisa, reminisced "His chair was hit so hard, that the whole thing did a flip in the air, with him landing on his head several feet away from the crashing chair."

The Red Dawgs are part of the National Junior Wheelchair Basketball Association. NWBA also has collegiate teams at the Division 1, 2, and 3 levels. Russ hopes to continue playing at the college level, and is looking at schools such as Arizona, Oklahoma State, and Missouri to achieve this.

Russ's biggest fan is his mother, who teaches seventh grade reading and writing at WHS. She admits that the sport is a huge time commitment, what with practices every Saturday morning from September to March and traveling to tournaments. However, even though it is demanding, she feels that it is definitely worth it. Being with other families and kids similar to her own is very rewarding.

"If you can't participate in able-bodied basketball, you can do this," she commented. Children on the team may not all be wheelchair-bound, like her son who has spinobifida. Some have had other diseases like cancer or multiple sclerosis, or have been in car accidents that make it difficult to run or play regular basketball. Rather than sitting in the stands, these players are able to participate through wheelchair basketball.

After the last buzzer sounds and the basketballs are put away, the players must go back into the real world, which may not always be very accepting of the athletes' disabilities. 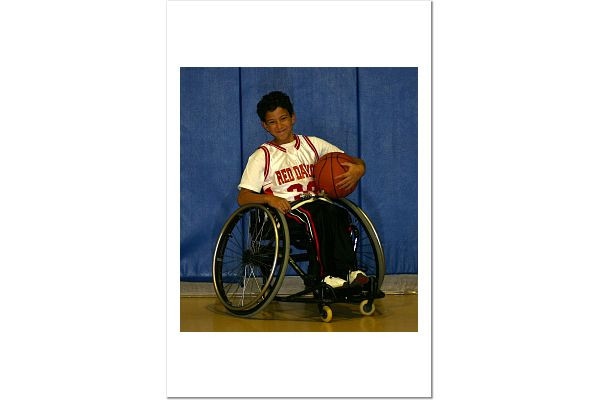 "Recess is a little bit difficult, but he's lucky because he has a great class that includes him," Russ's mother commented.

Russ's friends do more than just include him in games at recess. April 21, the middle school student council is planning a card game party to raise funds for the Nebraska Red Dawgs. The student council is charging admission for students to come and play card games, and will be selling snacks and drinks. All proceeds go to the Red Dawgs.

Eastern Nebraska Wheelchair Athletic Association (ENWAA) has recently named Russ the Prep Athlete of the Month for March. This honor is nominated by coaches. In addition to this honor, Russ also made the All-Academic 2nd Team. To qualify, athletes must have grades of A's and B's and also submit an essay.

When he's not playing basketball, Russ spends his time as most boys his age do: playing video games (preferably X-Box), hanging out with friends, and reading. He also makes plenty of time for his favorite television program: Sports Center on ESPN.