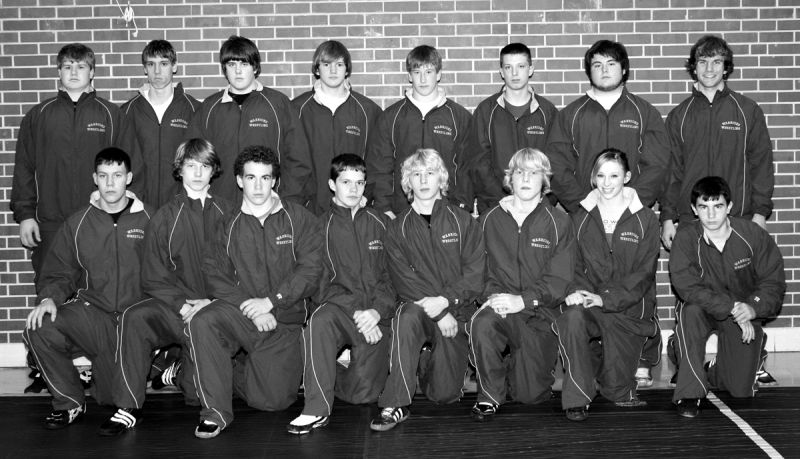 On Tuesday, February 3, the Wahoo/Cedar Bluffs wrestling team took the short trip across town to face off against the Bishop Neumann Cavaliers.

As usual, this turned out to be a nail bitter coming down to the last three matches to decide the outcome. The Warriors won 7 of 10 matches wrestled after giving up opens at 103, 145 and 189, while Aunbrea Zeleny earned a forfeit at 125 lbs.

The Warrior wrestlers came up with some big wins, earning pins with Joel Gensler at 135, Matt Hornung at 152, Kyle Kern at 112, and Randy Else at 119, while Junior Corey Davis revenged an earlier season loss to Eric Koranda at 160 lbs. with a 6-4 decision.
Other winners for the Warriors were Seth Stewart at 140 lbs. with a 7-4 decision over Jesse Sladky, and Josh Wood at 171 with a 9-5 decision over Matt Koranda.

The Cavaliers saw some big points in the upper weight classes as Keith Chvatal bumped up from 189 to 215 to pin Zach Roumph and John Wonka pinned Colter Mattson at 285 lbs. The only other Cavalier victory came at 130 lbs., where Collin Lindley moved up to the 130-weight class to earn a major decision over the Warriors’ Schyler Shanahan 17-4.
The Warriors were able to squeak out a close one winning the dual 39-34.

“I was very excited with the way the guys wrestled tonight. To give up three open weights and still come away with a victory against a good team says a lot about our team. I think this could really help our confidence going into the district tournament next Friday,” Head Coach Darold Foster said.

This Friday and Saturday, February 13-14, the Warriors will head to Gretna for the B-2 District Tournament to try and qualify for the State Championships. Wrestlers from the twelve competing schools will fight for the top four places, which will punch their ticket to the Qwest Center on November 19, 20 and 21.

The Wahoo Cedar Bluffs wrestling team took a trip to Waverley this weekend to take part in the Waverley Dual Tournament.

The Warriors finished 5th with a 1-4 record on the day after defeating Platteview in the second dual of the day.

“I thought the guys wrestled well today. We won more than we lost, but with so many open weight classes it is hard to win many duals,” commented Head Coach Darold Foster.

The Warriors were led by strong performances by sophomore Joel Gensler, who went 5-0 on the day, followed by Junior Matt Hornung who compiled a 4-1 record with 4 first period Falls. Junior Corey Davis also had a strong day finishing 3-0 after sitting a couple of duals due to injury.

“We still have a ways to go, but all of the guys are getting better as the year goes on,” Foster added. Plattsmouth came out on top as tournament champions with a 4-1 record followed by Waverly 4-1, Blair 4-1, Norris 2-3, Wahoo/Cedar Bluffs 1-4 and Platteview 0-5.

The Warriors had a fair showing winning four of the nine matches wrestled, but losing 51-15 after spotting Beatrice 24 points through open weight classes.

“I thought our guys wrestled well. We lost a couple that we should have won, but they showed a lot of improvement tonight. We came out and wrestled a lot more aggressively than we have so far this year,” commented Head Coach Darold Foster.

A couple bright spots in the dual for the Warriors came in the middle weights where sophomore Joel Gensler revenged a loss from last year against Brandon Clark with an 8-3 decision, followed by freshman Seth Stewart, who came out and earned a hard fought 7-6 decision at 145 pounds. Then came the only pin of the night for the warriors as Matt Hornung pinned Tyler Murkey in 1:36 in the 152-pound bout. The only other victory of the night came for 215-pound junior Zach Roumph, who defeated Spencer Trout 9-3.

The Warriors’ next test will come at the High Plains Invitational this Friday and Saturday, where they will face some of the top teams in class B, C and D.